Hanukkah: The Multiplier Effect - The Power of the Jewish People 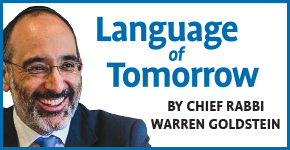 One of the great unheralded heroes of the Holocaust was Rabbi Avraham Grodzinsky, the spiritual leader of the Kovno ghetto. Until the outbreak of the war, he had been the Rosh Yeshiva of the famed Slabodka Yeshiva and was one of the leading sages of his generation. He had entered the yeshiva at the age of 17, and, under the tutelage of the legendary Rabbi Nosson Tzvi Finkel, the "Alter of Slabodka", devoted himself to both intense Torah learning, and equally intense character refinement.

Later, amid the horrors of the Kovno Ghetto, people would attest to the open, friendly countenance Rabbi Grodzinsky carried at all times, perfecting the trait of "receiving every person with a friendly face" (Pirkei Avot, 1:15), which was a source of hope and great comfort to all those who encountered him. In the years of the ghetto, when the situation was most dire, he formed a group of 10 of his former students from the Slabodka Yeshiva, who would meet every Shabbos to discuss what spiritual and physical actions they could do to improve the plight of those around them. This eternal optimism in the face of hopeless odds - this faith in the power of the few - is an idea that goes right to the heart of Hanukkah.

Actually, Rabbi Grodzinsky took his initial inspiration from an earlier source than the Maccabees. In the Torah portion a few weeks ago, we read of Abraham's tireless negotiations with God to save the cities of Sodom and Gomorrah. After a few rounds of negotiation, God eventually agrees to save the cities if 10 righteous people can be found within them. From here, the Talmud learns the foundational spiritual principle that 10 righteous people can have a decisive impact on an otherwise hopeless situation (Sanhedrin 99b). The Talmud goes even further, stating that a person who doesn't believe in the power of 10 righteous people to save the world is guilty of heresy. In other words, the belief in the power of even a small group of people to change the world and overturn the natural order of things is no less than a fundamental principle of Jewish faith.

We see a powerful illustration of this principle in the story of Hanukkah. The mighty Greek empire that had conquered most of the known world at the time had invaded the land of Israel and was pursuing a relentless campaign to remove all vestiges of Torah living from society. The situation seemed hopeless. There were many Jews at the time who were abandoning their faith due to both the existential threat and the enticements of Greek society. It was at this point that a small group of people banded together - Matisyahu and his brothers - to try and do something about the situation. What began simply as an act of defiance became a miraculous military defeat of the mighty Greek army, allowing the Jewish people to reclaim the land, reclaim the Torah and reclaim the Holy Temple.

More than 2 000 years later, in the depths of the Holocaust, Rabbi Grodzinksy drew on the Maccabees' example, recruiting 10 righteous men of his own to bring hope and strength to the inhabitants of the ghetto, and spreading light in a time of unimaginable darkness.

The prayer we read describing the great miracles of Hanukkah describes how God delivered "the many into the hands of the few". And, indeed, the smallness of the Jewish people and our outsized impact on the world is the story of Jewish history. As the Torah says: "Not because you are the most numerous of the nations did God want you and chose you - for you are the fewest among the nations." (Devarim 7:7)

Why is that? Why is it that the Jewish people, so small in number, are able to have this seismic effect on the world? Part of the reason is that we, the Jewish people, are a living testimony to a fundamental truth about the nature of reality - that the physical world is just a smokescreen for a deeper spiritual reality. Overcoming the odds, subverting the natural order of things, testifies to the primacy of the world of spirituality over the world of materialism, to the fact that God - who is the Creator of all matter and the source of everything - is the One in control. So, what we see in the story of Hanukkah, and in many other instances in which the Jewish people have defied their small numbers, is how the impact of the few is multiplied through God's intervention, defying all rational predictions and overturning empirical reality as we know it. This idea is symbolised by the defining miracle of Hanukkah - the small jar of halachically pure oil the Maccabees found when they recaptured the Temple, which burned for eight days when it should have burned for one. This is why we celebrate Hanukkah by lighting candles for eight days.

Friends, why is this miracle so central to the festival? Surely the great military victory of the Maccabees over the mighty Greek empire was even more remarkable? The reason is that the miracle of the oil burning for longer than it was supposed to encapsulates all of the other miracles. It symbolises this multiplier effect that we've been discussing - that through God's direction, through the mysterious workings of a deeper, essential, spiritual realm, outcomes in the physical world can be amplified beyond their input. And a small jar of oil that was meant to burn for a day can burn for eight.

Rabbi Aharon Kotler, the great Rosh Yeshiva of Lakewood, points to the fact that it was the oil's spiritual purity that imbued it with the miraculous power to burn for eight days, to transcend its physical limitations. Similarly, it was the righteousness and uprightness of the Maccabees that enabled them to defeat the great army of the Greeks. Both are small in physical quantity, but potent in spiritual quality.

And this is the great lesson of Hanukkah for the Jewish people - that, irrespective of our numbers, if we remain upright and loyal to our Divine heritage, then we will always survive and thrive. Rabbi Kotler's personal life story bears this out. One of those fortunate to escape Europe before the Holocaust swept everything away, he came to America and established a small yeshiva in Lakewood, New Jersey. In the 1940s and 1950s, few people held much hope for the prospects of a classic Torah institution in the heart of the new world, yet, starting with a handful of students, and in defiance of all rational predictions, the yeshiva grew to become the largest centre of Jewish learning in the Diaspora, with more than 6 500 students. He started small, battling the odds, but his vision had the power of purity behind it.

This message of the few over the many, of God's multiplying effect of our actions, is the story of Jewish history. Israel is such a small country, and yet its impact is so great, and wherever Jewish communities have found themselves, their impact on wider society has been out of all proportion to their small size.

But, the real secret ingredient to transcending physical inputs is spiritual purity. Purity is the yeast that makes our efforts rise up. It's all about the purity of the oil, of the energy and intentionality we put into our work in this world. Purity is about sincerity, about kindness, compassion and decency, about spirituality and faith in God, and dedication to His Will, His Torah. With this, we can truly achieve great things, supernatural things. We can go beyond the numbers.

This seminal message of Hanukkah, this Heavenly multiplier effect, applies no less to our personal lives. A person may feel he will not be able to earn a living if he closes his business on Shabbos, but Hanukkah teaches us that God can multiply all of the week's work to more than make up for it. A person may feel that dedicating himself to absolutely scrupulous business ethics may cost him money, but ultimately, God has the power to bless all of our efforts and to multiply them. The same goes for tzedakah - charity - for which the Torah itself promises multiplied returns.

On Hanukkah, a small group of righteous people made a big difference, overcoming a mighty force. If good people with pure hearts and sincere intentions band together, even in small numbers, they can bring light and blessing into the world. God's blessings can multiply the effect of the limited physical world like that small jar of oil that burned for so much longer, thereby spreading so much light in the world. This is the message of hope and optimism of Hanukkah.