Coat of Many Colors 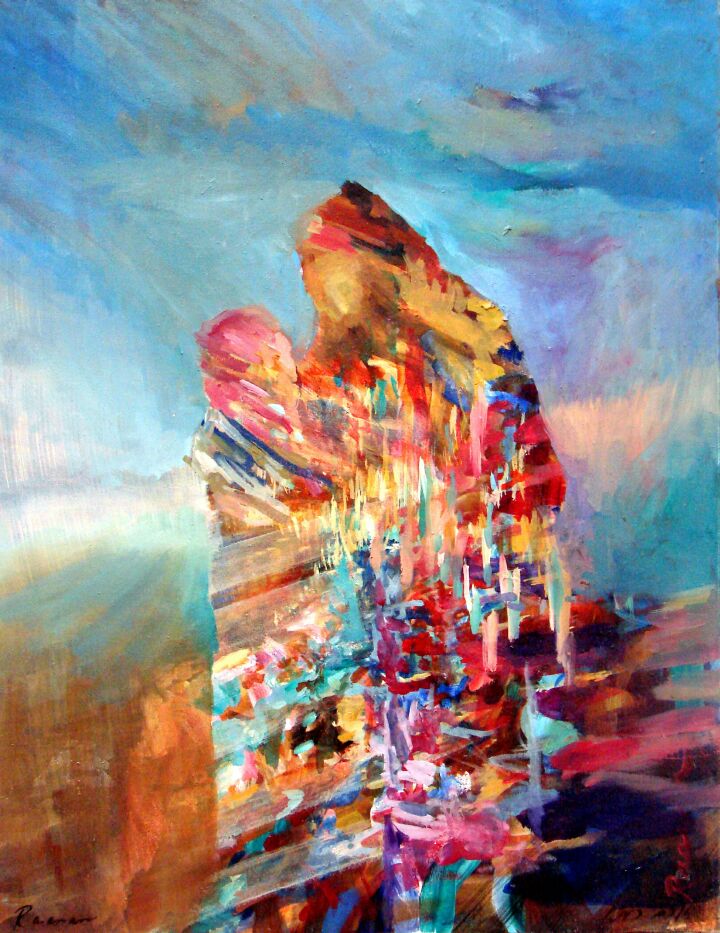 Israel loved Joseph more than any other of his sons…and he made Joseph a long, colorful coat. (Genesis 37:3)

When Raanan is searching for something greater in a painting, he looks at the canvas from all directions. This painting started out as a colorful horizontal landscape. As he turned the canvas ninety degrees, the suggestion of a figure caught his eye.

"I painted over everything that I sensed did not belong to the figure, which emerged as two figures so close together they appeared as one at first," he recalls. "The new background came from the process of clarifying what I did not want." Raanan left alone the figures themselves, enhancing their faces only a little. "They had always been there," he says. "All the colorful paintwork that suggests the couple, left over from what had been the horizontal landscape."

In the painting, Jacob is bestowing the coat of many colors on Joseph, the beloved son who most resembles him. They stand in intimate communion, wrapped in the colorful cloak, so that they seem to share one body. The vibrant, multihued brush-work conveys intimate feeling and emotion in the space that they share. Their inner world is rich with detail, movement, and loving energy. Their hearts seem like flickering candle-flames. However, there are dark lines and discordant strokes of paint hinting at tribulations to come. This beautiful robe will soon be torn from Joseph, dipped in blood and displayed to Jacob as false evidence of Joseph's being torn apart by animals. Thus Jacob and Joseph will be torn apart for twenty-two years.

Nature itself is a multi-colored and multi-faceted covering - "the cloak of nature" - which covers and conceals Godliness. From this bolt of fabric, so to speak, God fashioned clothes for the first man and woman after they sinned in the Garden of Eden and were banished from it. According to the midrash, Joseph's coat was none other than the garment which the Holy One, blessed be He, made for Adam and which subsequently fell into the hands of Nimrod and then of Esau. It was this "coveted garment" that Jacob wore when he received Isaac's blessing. (Torah Sheleimah, vol. 50, p. 1399)

Walk In My Ways

As the Stars of Heaven

The Book of the Covenant

Purity
Why the Mezuzah is Placed on a Slant
Faith: the Axis Upon Which the Wheel of Science Turns
Love - Not Just About Chemicals Anymore!
Comments
More Articles on Vayeshev
MOST POPULAR AT Aish.com
A Jewish American Tale
Our privacy policy