It's Never Too Late! 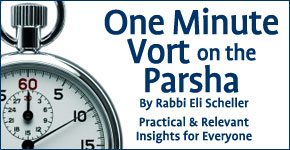 The Rabbis tell us (Yoma 35b) that at the end of a person's life he will be brought before the Heavenly Court and they will ask him why he did not learn Torah. He will reply, "What should I have done, I am handsome and was unable to control my desires. Life is full of pleasures! How could I pass them up to study Torah?" The Heavenly Court will reply, "Your excuse is not acceptable! Are you more handsome than Yosef, who ruled over his evil inclination?" The Talmud states that Yosef epitomized kedusha - holiness. Potiphar's wife tried to tempt him daily, changing her clothes three times a day, but he overcame his evil inclination; he wouldn't even glance at her!

It is difficult to understand why Yosef is considered one who was dominant over his evil inclination when, according to one view in the Talmud, Yosef's resistance actually cracked. The verse says that "One day he entered the house to do work," and one opinion understands that he intended to give in to her advances. Suddenly he had a vision of his father, which shook him up and he dashed out of the house. How can the Talmud consider Yosef the model of one who is dominant over his desires, when he really did succumb to his temptations, albeit before regaining his composure?!

When the evil inclination grabs a hold of someone and he is caught in the moment, his adrenaline is rushing and it is close to impossible to stop and back out. A person says to himself, "I already started, I'm in it, and it makes no difference if I continue." However, Yosef was able to take hold of himself and say, "Let's forget about what I did until now. This exact second, what does God want from me? Does He want me to continue or to get out of here?" With that he ran out. This is what the Torah considers a strong person and the epitome of holiness!

It doesn't matter what situation a person is in, or what he has been doing wrong until now; it is never too late to change. You must constantly think, "Right now, what does God want from me?" (1) Today is the first day of the rest of your life!