More Than Meets the "Eye" 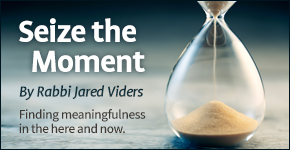 When I first arrived in yeshiva there was one student, Shmuel, who was old enough to be the grandfather of most of his fellow attendees at Ohr Somayach (Monsey). Notwithstanding his battles with a debilitating disease, a smile perpetually graced Shmuel's face. He came to be known as the "Welcome Committee," because he invariably reached out to each and every new face with warmth and positivity.

Approximately ten years later, Monsey and the Ohr Somayach community mourned the loss of Reb Shmuel and his uncanny capacity to recognize that people - with all our foibles and all our imperfections - are truly wonderful. During the shiva period, friends recalled, among others, two sterling aspects of Shmuel's character - 1) this capacity to recognize the good in others (and to give expression to that goodness); and 2) his deep-seated humility.

One visitor proceeded to explain, with the following vignette, that these two traits are really rooted in the same mindset.

"One of the pious, it is told, passed by the carcass of a dog which gave forth a dreadful odor. His disciples said to him, 'How dreadfully does this carcass smell!' He said to them, 'How white are its teeth!' They then regretted the disparaging mark they had made about it."

Interestingly, the author of the Duties of the Heart included this parable in the chapter called The Gate of Humility. What, exactly, do these lines teach me about being humble?

Returning to the dog's carcass, what enabled the disciples' teacher to zero in on the whiteness of the teeth was not only a by-product of his glass-half-full, focus-on-the-positive, see-the-silver-lining mindset. Rather, the between-the-lines take-home lesson was the fact that the teacher also smelt the dreadful odor emanating from the carcass. He wasn't olfactory-challenged. He didn't have a stuffed nose. So why didn't the unsavory aroma torpedo his capacity to perceive positivity?

Bcause he was so humble of spirit. His humility empowered him to endure personal discomfort while limiting its' scope. What was unpleasant to him did not spill-over to a degree that it would warp his core desire to be positive and see positive. In other words, his humility protected his consciousness from being hijacked by his personal discomfort.

We are, by nature, hard-wired to think first and foremost about ourselves - Am I tired? Am I hungry? How much coffee do I need to get this day underway? Do I feel underappreciated or overwhelmed - and only then - after I am "good to go" am I capable of processing the world at-large beyond me. God's kindnesses. The sunshine. The breeze. The other people in my life and their particular attributes (to praise) or lacks (to strive to fulfill).

This being the case, the more humble a person is, the less self-consumed they are likely to be, and, thus, it will be that much easier to see beyond one's own immediate needs and agenda.

In this week's Torah portion, Yosef repeatedly exhibits this strength of character - i.e., the wherewithal to see beyond his own personal crises. For instance, the Torah informs us that the Ishmaelites camels "were bearing spices" (Gen. 37:25) instead of their usual cargo, i.e., the malodorous petroleum and resin. Rashi elaborates that the Torah is not interested in teaching us the export/import habits of ancient desert-dwellers but rather to inform us that Hashem went "out of His way" so-to-speak to ensure that Yosef's descent down to Egypt would not be further exacerbated by an unpleasant smell.

Would such a minor detail register with us? Imagine you're being carted off to prison for a crime you didn't commit, life as you know it is coming to a crashing halt, all your dreams have gone up in smoke, you may never see your family again and ... wait, what's on the patrol car's radio, is that Vivaldi's "Four Seasons" I hear - "oh I just love that score ... come to think of it, this nightmare isn't all that bad ...." Ridiculous.

Later, when sitting in prison (for yet another crime he didn't commit), Yosef has the emotional equilibrium to perceive on his fellow inmates' faces, that "they were aggrieved" (Gen. 40:6) and had the psychological wherewithal to inquire "Why are your faces downcast today?" Had Yosef truly been wallowing in his own self-pity, consumed with negative thoughts of "woe is me" and consumed with regret, anger and anxiety, Rabbi Bertram observed, that there's simply no way he would have the bandwidth or the buoyancy to make a sincere inquiry into someone else's hardships - or even to notice them at all.

The "I" and the "self" seemingly loom larger than ever. We are no longer hungry, we are "starving" and "famished." The weather is no longer merely hot or cold but rather "sweltering" or "frigid." And no one is tired anymore, but rather "exhausted." Our lacks (and our perception thereof) seemingly far outpace all that is truly going right in our lives. As the radiance of Chanukah begins to emerge on our horizons, may we discover the Torah's brand of humility that will enable us to transcend our own innate self-awareness, to tap into the beautiful world that surrounds us and thereby taste the true sweetness of life.