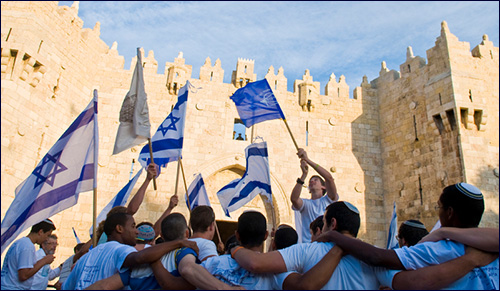 The two-millennia love affair of the Jewish People.

The Roman army conquered what had been the glory of the Jewish nation for a thousand years. They pillaged Jerusalem, and slaughtered or enslaved every Jewish resident.

Sixty-five years later, the Roman Emperor Hadrian razed the city. On its ruins, he built Aelia Capitolina. The only Jews allowed entrance were Jewish slaves. And the name “Jerusalem” survived only in our prayer books, from which we beseeched God three times a day to rebuild Jerusalem.

When the Roman Empire reinvented itself as the Christian Byzantine Empire in the 4th century, they brought back the city’s name, Jerusalem, but not its Jews. Jews, who still lived in thriving communities in the Galilee and the Golan Heights, were permitted entrance only one day a year – on Tisha B’Av, the day of the destruction of the Holy Temple and of Jerusalem. As a contemporary historian, Jerome, wrote: “The Jews can only come to mourn the city, and they must buy the privilege of weeping for the destruction of the city.”

The Arab conquest in 638 wrested the city from the Byzantines. The Caliph Omar, the Muslim ruler, permitted Jews to return. A large Jewish enclave settled to the north of the Temple Mount. The Temple Mount, of course, was the crown of Jerusalem. The Roman Emperor Hadrian had built a temple to Jupiter on the ruins of the Jewish Holy Temple. The Byzantines had built a church there. Now the Muslims leveled the site and built the Dome of the Rock and the El Aksa Mosque.

The Crusaders conquered Jerusalem in 1099, and killed every Jew and Muslim.

The Crusaders conquered Jerusalem in 1099, and killed every Jew and Muslim. Blood flowed knee-deep through the holy streets. Soon the Christians allowed Jewish textile dyers to return. Benjamin of Tudela recorded, “There are about 200 Jews who dwell under the Tower of David.”

A century later the Muslims under Saladin defeated the Crusaders, and Jews once again were permitted free access to Jerusalem. As Rabbi Solomon ben Samson wrote: “We arrived at Jerusalem by the western end of the city, rending our garments on beholding it. … It was a moment of tenderest emotion, and we wept bitterly.”

The Egyptian Mamluks (soldier-slaves) took over the city in 1250. When the famous Rabbi Moshe ben Nachman (the Ramban) arrived from Spain he found not even enough Jews to make a minyan. In an epistle to his son he wrote, “I write you this letter from Jerusalem, the holy city… the most ruined of all cities….We found a ruined house with pillars of marble and a beautiful dome, and we converted it into a synagogue…. The houses of the city are abandoned, and anyone could claim them.” The Ramban re-established the Jewish community in Jerusalem and it grew.

In 1516, the Ottoman Turks conquered the city. The sultan Suleiman the Magnificent rebuilt the walls of Jerusalem and encouraged the Jews exiled from Spain (in 1492) to settle there. Less than a century later, however, the Turkish regime became corrupt. They imposed heavy taxes and many restrictions of the Jews of Jerusalem. Nevertheless, drawn by their hearts and their prayers, Jews continued to return to Jerusalem.

By the mid-nineteenth century the walled city of Jerusalem was so crowded with Jews that a few residents suggested moving outside the walls, but without the massive stone protection they would be at the mercy of roving bands of brigands. Sir Moses Montefiore took the first step to solve the problem by building a protected compound outside the walls; twenty intrepid Jewish families took up residence there. Soon other Jewish enclaves sprouted up, and the new city of Jerusalem extended beyond what came to be known as the “Old City” like a bevy of descendants around their Matriarch.

The British vanquished the Turks during World War I, and in 1917, General Allenby marched victoriously into the walled Old City. The British divided the Old City into four quarters: the Muslim Quarter (actually half of the area of the Old City), the Christian Quarter, the Jewish Quarter, and the Armenian Quarter. The designations were spurious; according to the British rulers’ own census, the majority of residents of “the Muslim Quarter” were Jews.

The British maintained the Turkish restrictions on the Jews at the Kotel (Western Wall), the world’s holiest Jewish site next to the Temple Mount itself. Only a narrow alley was accessible for Jewish prayer. Jews were not permitted to bring benches or stools to sit on. Jews were not permitted to put up a mechitza such as existed in the synagogues. Those Jews who dared to blow the Shofar on Rosh Hashana or the end of Yom Kippur were arrested and imprisoned.

When, in May 1948, the British were forced by the United Nations to leave, the Old City of Jerusalem, including the Temple Mount and the Kotel (Western Wall), fell to the Jordanian army (known as the Arab Legion). All the Jewish residents were exiled. The men were taken to Jordan as prisoners of war, and the women, children, and elderly were forced out through Zion Gate, as their homes of generations were looted and burned behind them.

For the first time in three millennia, the Old City of Jerusalem was Judenrein.

The nascent State of Israel, born that month, proclaimed Jerusalem its capital. David Ben Gurion, the first Prime Minister of Israel, declared: “The value of Jerusalem cannot be measured, weighed, or put into words. If a land has a soul, Jerusalem is the soul of the Land of Israel.”

The “new city” of Jerusalem, divided between Israel and Jordan, became the bustling location of governmental, educational, and cultural institutions. But its heart, the walled Old City, surrounded by barbed wire and a menacing No Man’s Land, remained outside of Israel like, during certain cardiac surgeries, the patient’s heart sits outside his body.

For nineteen years, Jerusalem – the real Jerusalem, the Old City – retreated into our prayers and our longings. Israel’s greatest songstress Naomi Shemer composed a haunting song, “Jerusalem of Gold,” that became an anthem of yearning for secular Jews as the Psalmist’s “If I forget thee, O Jerusalem,” was for religious Jews.

Then on the 28th day of the Hebrew month of Iyar, on the third day of the Six-Day War in 1967, while the Israeli army was battling the Jordanian army in areas along No Man’s Land, the Israeli command suddenly realized that it might be possible to reclaim the Old City. In the files of the Israeli army were detailed military plans for how to take every hill and field in the land, but there was no plan at all for taking the Old City. Its thick walls and belvederes, built to ward off invaders, had made it invincible in 1948, when dozens of Jewish fighters had lost their lives trying to penetrate its bastions. But, now, when miraculous victories were being scored on every front, was it possible – really possible – to reclaim the Old City of Jerusalem?

The order was issued to the 55th Paratroopers Brigade of Motta Gur to take the Old City. A secular Jew with the yearning for Jerusalem running through his veins, Gur was humbled by the charge, that after 2,000 years, he would get to command the Jewish forces that would finally bring Jerusalem back to Jewish sovereignty.

The paratroopers entered through Lions’ Gate. Much to their surprise, other than occasional sniper fire, there was no resistance. The Jordanian forces had evacuated the night before. The Israeli troops, like a magnet, headed directly to the Temple Mount. The words of Mutta Gur, heard on radio in bunkers and bomb shelters and bases throughout Israel, would echo throughout modern Jewish history as the rallying cry of a vanquished-now-victorious people: “Har Habayit b’yadenu, the Temple Mount is in our hands!”

I sit here today, in the Old City of Jerusalem, 47 years after that historic day, and I celebrate it as Yom Yerushalayim, Jerusalem Day.

My grandchild plays in the ruins of the Romans.

My husband prays in the 13th century synagogue founded by the Ramban.

I daily walk on the cobblestone streets where the Prophet proclaimed: “Old men and old women will once again dwell in the streets of Jerusalem … and the squares of the city will be filled with boys and girls playing in its streets.” [Zechariah 8:4]

Will you celebrate with me?

Sara Yoheved Rigler requests: If you have been inspired by my book Holy Woman, please light a candle for the “Holy Woman,” Rebbetzin Chaya Sara Kramer, on her yahrzeit, this Saturday night/Sunday (June 1).

Rabbi Jonathan Sacks: What Jerusalem Means to Me

In the Shadow of David and Goliath
The 21st President of the United States: Failure or Inspiration?
Hiding Their Jewishness
The Jewish Pope: Following the Questions Home
Comments
MOST POPULAR IN History
Our privacy policy
Aish.com Is Looking for Great Writers