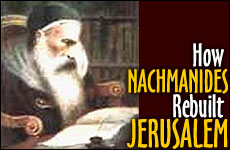 Forced to flee from Spain at age 72, the great sage restored Jerusalem's ruins.

Seven hundred years before Israeli paratroopers restored the Old City of Jerusalem to Jewish hands, a great sage was rejuvenating Jewish life in the holy city, building the cornerstone for many generations to follow.

Nachmanides, also known as Ramban (an acronym of Rabbi Moses ben Nachman), was born in Spain in 1195. He was a physician by trade, but was best-known for authoring brilliant commentaries on the Bible, the Talmud, and philosophy.

Nachmanides lived during an era when the Land of Israel suffered a wave of rulers who conquered and wreaked devastation. In 1099, Crusaders sacked Jerusalem and massacred both the Jewish and Muslim inhabitants. Saladin the Muslim wrested control of Jerusalem in 1187, and over the next 50 years, a succession of conquerors arrived: the Tartars, the Mongols, and the Mamelukes.

These invasions left Jerusalem bereft of Jews, and the city in ruins.

Meanwhile in Spain, anti-Jewish sentiment was pushing Jews to convert. (This eventually manifested in the Inquisitions and expulsion of Jews from Spain in 1492.) One technique was to "prove Judaism wrong" by holding a religious debate -- a disputation -- between a rabbi and a priest.

Such undertakings were fraught with danger. If the rabbi lost (i.e. Judaism was "proven wrong"), Jews would be forced to convert en masse. And if the rabbi won, things weren't necessarily any better: In one disputation, the rabbi won the dispute but Talmud books were burned by the cartload anyway.

In 1263, King James of Spain authorized a disputation between Nachmanides and a Jewish convert to Christianity, Pablo Christiani. Nachmanides reluctantly agreed to take part, only after being assured by the king that he would have full freedom of expression. The topic of the debate focused on a key difference between Judaism and Christianity: defining who is the messiah, and proving whether or not he had "already come."

Nachmanides won the battle, but lost the war. His arguments earned the king's respect (and a prize of 300 gold coins!), but the Church ordered Nachmanides to be tried on the charge of blasphemy, and he was forced to flee Spain.

So it was that at age 72, Nachmanides decided to move to the desolate ruins of Jerusalem.

Aware of the dismal situation in Israel, Nachmanides seemed to be planning Jerusalem's revival before he arrived. Just prior to his departure, he delivered a sermon about the holiness of the land and the importance of giving charity. He was perhaps priming his congregants to support endeavors of building religious institutions within the land.

In 1267, after a long and perilous journey, Nachmanides arrived at the port city of Acco. After a brief stay, he traveled to Jerusalem where he was struck by its desolation. Buildings were dilapidated and abandoned. There were so few Jews that he could not even find 10 men for a minyan to pray!

In a letter to his son, Nachmanides wrote:

Many are [Israel's] forsaken places, and great is the desecration. The more sacred the place, the greater the devastation it has suffered. Jerusalem is the most desolate place of all.

Yet Nachmanides saw hope. He recalled the Torah verses (Leviticus 26:32-33) in which God describes Israel during the period of exile:

So devastated will I leave the land, that your enemies who live there will be astonished... Your land will remain desolate, and your cities in ruins.

Nachmanides wrote in a commentary on this verse:

That which God states here, "So devastated will I leave the land that your enemies..." constitutes a good tiding, proclaiming that during all our exiles, our land will not accept our enemies. This is a great proof and assurance to us, for in the entire inhabited world one cannot find such a good and large land which was always lived in, and yet is as ruined as it is [today]. For since the time that we left it, it has not accepted any nation or people, and they all try to settle it, but to no avail.

Indeed, during the many centuries of Israel's exile from its land, no conqueror ever succeeded in permanently settling the land or causing the desert to blossom. In the ruins of Jerusalem, Nachmanides saw a fulfillment of God's promise that the land was waiting for the Jews to return.

Cornerstone of a Community

Nachmanides immediately set into action rebuilding the Jewish community. He chose a ruined house outside the Old City walls on Mount Zion -- one with marble pillars and a beautiful arch -- and began construction of a synagogue. Torah scrolls that had been removed before the Mongol invasion and transported to the city of Shechem, were returned.

Word of Nachmanides' presence brought more residents to Jerusalem. In a mere three weeks, the aptly-named Ramban Synagogue was ready for use, just as Rosh Hashana had arrived. And on that high holy day, Nachmanides delivered a sermon urging the new arrivals to remain in Jerusalem.

The next task was to set up a yeshiva. As word spread, students journeyed to Jerusalem to be near the revered scholar, teacher and leader. Nachmanides succeeded in laying a foundation of Jewish renewal, and after one year, he returned to Acco to lead the congregation there.

Back to the Future

After Nachmanides' death in 1270, the Ramban Synagogue was moved inside the Old City walls. It was built below ground level, because at the time Muslim law forbade any Jewish place of worship to be taller than any Muslim place of worship.

Over time, the Jewish community of Jerusalem increased until it once again became the center of Jewish life in Israel. Sephardim and Ashkenazim prayed and studied together in the Ramban Synagogue for the next 300 years. Then in 1589, due to Muslim incitement, the city's governor, Abu Sufrin, turned the synagogue into a warehouse. By then, however, the Jewish community was well established. It would continue and increase for centuries hence, until 1948 when…

During the early stages of the Israeli War of Independence, forces of the Hagana valiantly fought a desperate battle to hold onto the Old City. Ultimately they surrendered to the Jordanians, who occupied the Old City and evicted all the Jewish residents. Dozens of synagogues were destroyed and the remnants of hundreds of years of Jewish existence in Jerusalem were virtually wiped out. The Ramban Synagogue itself was turned into a dumpsite.

Independence was achieved, but Jerusalem's ancient streets again lay empty, as during the dark days of the Crusades.

It was 19 years later, in June 1967, that Jerusalem was reunited. Many of the ancient synagogues were rebuilt, and the Jewish community of the Old City was restored.

In the center of today's thriving Jewish Quarter stands the Ramban Synagogue. The history and holiness can be felt in its every brick and archway. It is a place bustling with prayer and Torah learning, its presence a living testimony to the efforts of Nachmanides, 700 years earlier, which reverberate loudly till today.

My Home, My History, My Heart

The Tragic History of the Jews of Spain

When King Louis IX Tried to Wipe Out Judaism

Why Jerusalem Matters
Olivia Newton John’s Grandfather was a Nobel-Prize Winning Jewish Physicist
Don’t Believe in Other Gods Versus God is One
Seeing Without Eyes
Comments
MOST POPULAR IN History
Our privacy policy
Aish.com Is Looking for Great Writers