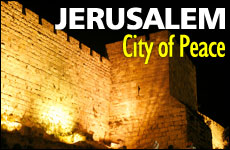 Being in Jerusalem is the fulfillment of the hopes and prayers of millions of Jews over the generations.

Jerusalem is referred to as the Holy City. The Torah says that there's a special relationship that the Almighty has with this particular point in space. For most people who live in Jerusalem, and even most visitors, that translates to some sense of a special feeling or a special consciousness. What is this ness all about?

Sometimes it expresses itself in the most unexpected ways. One day I was taking a taxi, and as soon as the ride began, the driver turned to me and said, "Teach me some Torah."

"Is this the cost of the fare?" I asked.

I shared a few words of Torah with him. "Now it's your turn," I said. "We have a long trip left."

And he proceeded to weave together a web of beautiful Torah, drawing from Kabbalah and other esoteric sources. He was really getting into it, and I started to worry about whether his attention was on the road. When he finally finished, I was in awe.

"Where do you get this stuff from?" I asked him.

"What do you think I do all day? I collect Torah."

Welcome to Jerusalem! Where even the taxi drivers learn Torah all day!

In so many places we find references to Jerusalem as the center of Jewish focus. We see it in our holidays when we say, "Next year in Jerusalem" at the end of our Passover Seder. We say it while dancing at the conclusion of Yom Kippur. It's that constant hope and prayer for Jerusalem.

Jerusalem is also the centerpiece of our prayers. Whether we're standing in silent meditation, or thanking the Almighty for our food, we express a prayer for the well-being of this place. This city -- and the mountain in the Old City which was the site of the two temples -- is the point to which all of our prayers are also physically directed. Jews around the world face Jerusalem when they pray.

Jerusalem is the center of Jewish hopes, of Jewish dreams.

People living in Jerusalem position themselves and their synagogues in relation to the Temple Mount. We all face this spot, wherever we are in the world. When we stand in silent prayer, we imagine ourselves as though we are standing in that place. This point in space is the center of Jewish hopes, of Jewish dreams; it is a place of reference. It is the site of the two temples which were a living reminder of God's presence in the world. It was a place where anyone could go to get in touch with the transcendental. It was a place where they were reminded that there was something intrinsically meaningful in their lives worth striving to get close to.

There is a custom of putting ashes on a groom's forehead at the moment just before walking to the wedding canopy. This -- and the broken glass under the canopy -- are there to remind us of the destruction of the Temple and of Jerusalem. It's a reminder that, as the Psalmist wrote, I put Jerusalem above my highest joys. [1]

For some this may seem like putting a damper on what is one of the greatest moments in a person's life. The Rabbi gets up and says, "Let's all remember the destruction of Jerusalem." It seems so odd. But when you think of it in terms of the statement, "I put Jerusalem above my highest joy," it simply means that there is further to go. At a moment when you have the great excitement of a wedding, and there is a profound sense of completion, you are enjoined to remember that the joy of life is not yet full. There are people who still suffer in the world. There's a recognition that we haven't yet gotten there.

How do we remember what there is? We remember Jerusalem. By breaking a glass, we remember that Jerusalem has not completed itself. All the Jewish people are not back in Israel; the Temple is not rebuilt. The spiritual center of Jerusalem hasn't achieved its goal. Breaking this glass, and putting those ashes on the groom's forehead at every wedding, serve as constant reminders. It's as the psalmist wrote "If I forget Jerusalem, may my right hand lose its cunning." [2] That's an astonishing statement. Somehow I'm missing my very strength for living and my ability to achieve in this world, if I forget what Jerusalem means.

I used to work with Russian Olim (new immigrants to Israel). When they first arrived, they would be sent to centers all over the country to help them make the difficult transition into this new life. Understandably, many of them found the adjustment very challenging. Frequently, I heard that if they had been brought here to Jerusalem initially, it would have given them a focus.

One time, a Russian man was sitting in my office. As he gazed out at the Western Wall, he said, "I've been here for six months. I wish that when we first arrived, that we'd come here. Then I would have had a different perspective on all these six months of tribulations." That same focus is what enabled the Jewish people to cope with the suffering of two millennia. It gave them a goal that allowed them to transcend the moment of suffering.

I remember my grandmother describing to me her first visit to Israel. She told me how they got off the boat (this was in the '50s), and she got down on the ground, and she cried. She kissed the ground. She felt the privilege of being in Israel after her entire family had been lost in the Holocaust. She knew that all of her eight brothers and sisters would have given anything to be in her shoes at that moment.

That sense of privilege is what pervades our discussion of Jerusalem. When we talk about a special focus and a special goal, we're speaking about a reminder of the privilege of being back in this city, as the fulfillment of the hopes and prayers of millions of Jews over the generations. We're talking about the awareness of the goal of the Jewish people in history, and the meaning of this place in our lives as an expression of that goal.

According to many, Yerushalayim (the Hebrew name of the city) comes from two words: Ir and Shalem. Ir means city. The second part is Shalem. It comes from Shalom, peace. City of Peace.

The word Shalem comes from the word to complete, or to perfect. Shlaimut in Hebrew, is to fulfill oneself, to achieve a level of completion in one's life. Jerusalem is the City of Completion.

A city, "ir," as Rabbi Shimshon Raphael Hirsch points out, is different from rural life. Rural life is more personal, more family-based. You are distant from your neighbors. You have your own farm to take care of. Urban life brings people into closer proximity with each other. There is an interaction of human beings with – hopefully -- a specific purpose. In the Bible, cities began to appear when human beings wanted to produce that which they couldn't produce separately. So, the combination of human ability, initiative, and experience creates the opportunity for the individual to create much more than he can make by himself. Thus, a city is the focal point of human interaction.

Jerusalem is a place to wake up to peace, an inner peace.

The Hebrew word for city comes from the root which means "to wake up." A city then is a place in which we can awaken our creativity and potential by interacting with other human beings in a way that we could not have if we were by ourselves. So, Jerusalem -- Ir/Shalem -- is a place to wake up to peace, an inner peace.

It's very odd that the city of peace has been filled with strife for so many thousands of years. Perhaps it is a symbol of the struggle of humanity and of the individual, neither of whom have yet found that peace. As long as Jerusalem is in strife, we as humanity have not found a way to bring completeness and peace into the world.

This means that Jerusalem is also a point of reference; a measuring rod. It is a place to wake up to what that peace could be, both globally and individually. Individually, what parts of me are not yet at peace? Jerusalem is a place to consider what conflicts I still have, and that I need to resolve, with my past, with my future, with my family, and within myself. It is a place which provides the space and ability to regret the mistakes of the past and to move on. In it, the parts of the whole are somehow able to come together.

If shalem is inner harmony, and Jerusalem is a place to awaken to this, then waking up to Jerusalem means a recognition of what could be, and somehow a sense of what I'm missing in relation to that; where I have to go, and how to bring that about.

For generations, our ancestors have looked to Jerusalem as the fulfillment of our hopes and dreams as a people. We keep a reminder of it wherever we go -- including in our prayers, and at our times of greatest joy -- to help keep us focused on our goal in this world. When we speak of the special quality of this place, we are talking about its power to truly awaken us to the incredible potential of individuals and humanity to realize a true peace and completion that will come from realizing their potential. May we always keep the fire of Jerusalem alive and burning in our hearts.

Abridged from an Aishcafe.com class.

Mayor with the Golden Touch