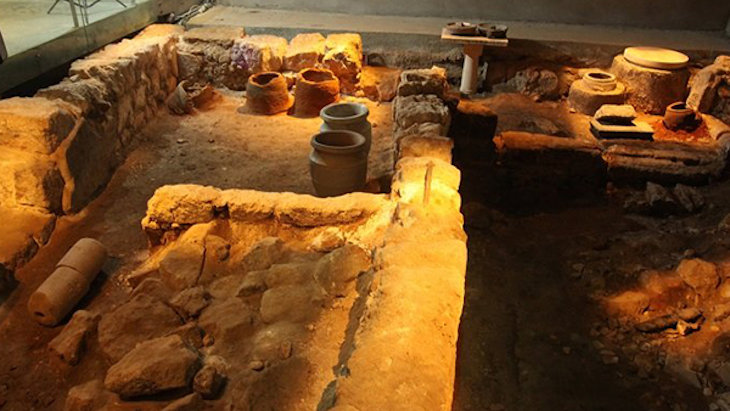 The museum, near the Western Wall, shows a priestly house that was destroyed along with the Temple.

“We came upon it suddenly, in the very first year of our excavations,” recalled Nahman Avigad.

Dr. Avigad was a renowned archeologist and celebrated fixture at the Hebrew University in Jerusalem where he taught for decades. Born in 1905 in Austria, he’d grown up hearing about his Jewish forefathers’ lives in the Land of Israel. He immigrated to the Land of Israel when he was 21 and studied archeology, eventually excavating a number of important Jewish sites including Masada.

After the 1967 Six Day War, Israel regained control of the Old City of Jerusalem. The Jewish Quarter had been completely destroyed over the past nineteen years while the city was in Jordanian hands, and Jerusalemites were eager to rebuild. The Israeli government appointed Dr. Avigad to oversee archeological excavations as building work went on. Within his first year of work, Dr. Avigad made a startling discovery just a few hundred meters from the Western Wall. 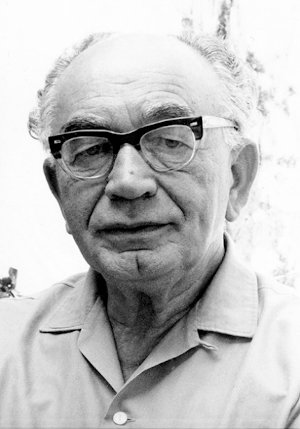 The Western Wall is part of the remaining structure of the Temple Mount that housed the ancient Jewish Temple in Jerusalem. The Holy Temple stood on that spot, on Mount Moriah in the center of Jerusalem, for a thousand years (with a brief interruption: the First Temple was destroyed by the Babylonian Empire in the year 586 BCE. Work was started on the Second Temple, built on the same spot. 48 years later and completed about the year 515 BCE.). In the year 70 CE, Roman forces destroyed the Temple, tearing down its buildings and burning all that remained in a massive fire that lasted for days.

Less well known was the area around Mount Moriah and the Temple. The neighborhoods nearby were residential, and dozens of leading Jerusalem families called the area home. While northern and northwestern Jerusalem was much more crowded, this more southern area of the city was home to larger public buildings. When Roman forces set the Temple alight, the fire spread rapidly throughout this larger area, burning untold numbers of buildings as well.

Just how enormous that long-ago fire was little understood until Dr. Avigad got to work nearby, in January 1970. “At that time we had not yet excavated a single house that had witnessed the catastrophe of 70 CE, when the Romans destroyed Jerusalem,” he later recalled. “We were still emotionally unprepared for the impressions and associations raised by the prospect before us.” Even the experienced archaeologists were caught off guard at the scale of the Jewish suffering they were about to uncover.

As they dug, they soon uncovered the walls of a small room about a meter below ground. The walls were stone and the floor was beaten earth. Soon an entire house became visible, comprising a kitchen, four bedrooms and a bathroom which contained a mikvah, or a Jewish ritual bath. The entire house was covered by a thick layer of burned ash. 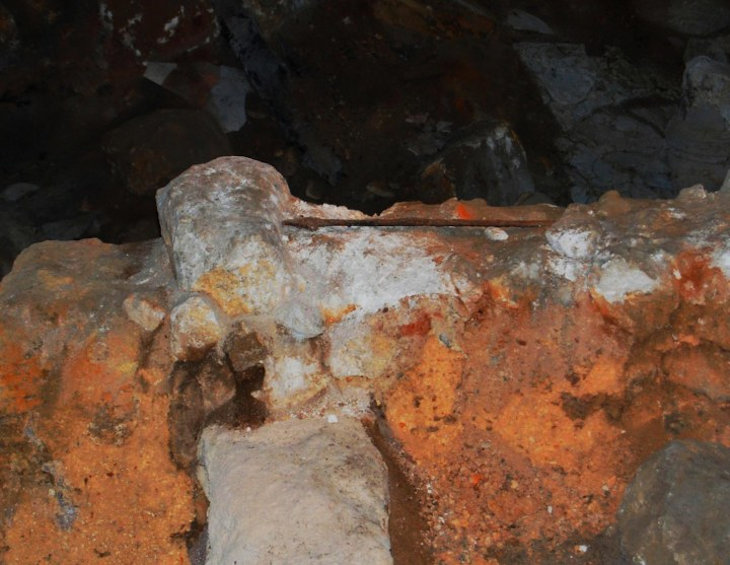 A spear found at the site of the Burnt House

Buried in the ashes were many everyday household objects such as bowls and stone weights. Other, more sinister, finds awaited as well: archaeologists found a metal spear, perhaps used to fight the Romans who were attacking Jerusalem. The arm of a young woman was also found inside the house. It’s impossible to know just what horrors occurred in the moments before the house, along with the Temple and other houses nearby, burned to the ground in a massive conflagration. Given that Jerusalem was the scene of heavy fighting, it’s possible that this woman’s arm was severed in the heat of battle. 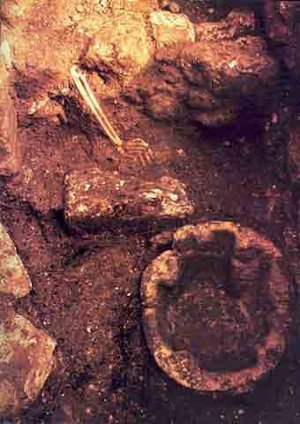 Caught in the fire when the Romans attacked, a young woman who was in the kitchen of the Burnt House sank to the floor and was reaching for a step near the doorway when she died. This is only a photo that is shown at the site, since the actual bone was buried.

A stone weight found in the house is inscribed “Son of Katros.” The Katros family are mentioned in the Talmud as one of 24 families of Cohens, or priestly families who served in the Temple (Pesachim 57a). Given that this burned house was large and spacious, befitting an upper-class family like the Katros family, that it contained a mikvah and that it was mere steps away from the Temple, it seems likely that this devastated mansion was the Katros family home. No mention is found of the Katros family after the destruction of Jerusalem. If any survived the battle and the fire, the story of their fate is lost to history.

The “Burnt House” Katros family home is today open to the public as a museum, just steps from the Western Wall. Standing in its small rooms gives a fascinating glimpse into Jewish history. Here were the rooms where generations of a priestly Jewish family lived and died. As guardians of and workers in the Temple, their lives were dominated by the responsibility of keeping the Temple running and helping the entire nation of Israel celebrate the Jewish holidays and commune with God. 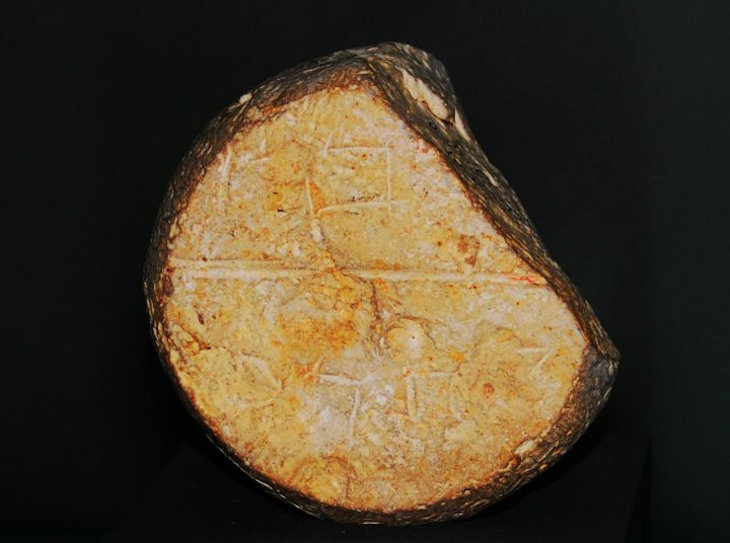 A stone weight, 10cm in diameter, with visible Aramaic/Hebrew inscription: “belonging to the son of Kathros”.

The national Jewish calamity of Roman forces destroying the Temple for the Katroses was personal too, as they fought and fled and watched their own family home consumed by flames. 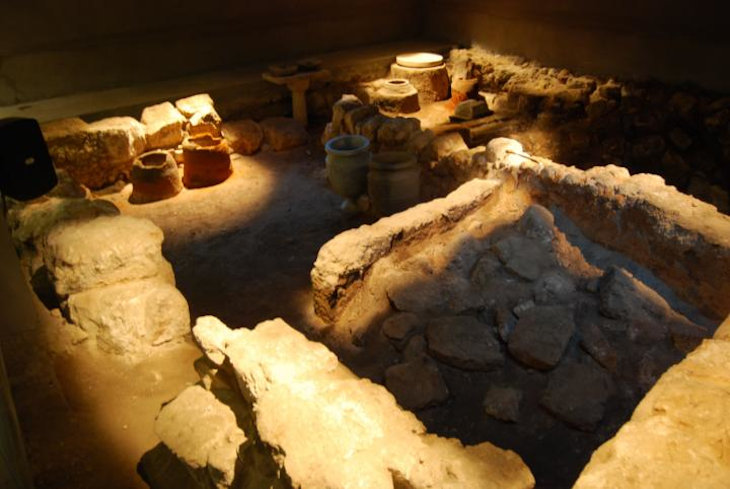 Several stone jars were found in the kitchen, seen in the upper side of the photo below.

In time, Dr. Avigad and his team would go on to discover several burned houses in the area, all destroyed in that massive fire of nearly 2,000 years before. In fact, Burnt House Museum today is part of a larger complex of excavations known as the Wohl Archaeological Museum and is open to the public. The nearby “Western House” is a private house that also houses its own mikvahs. A staircase going up is cut off abruptly, reminding visitors that Roman forces utterly destroyed anything located above ground level in their assault on Jerusalem.

Three other nearby ancient houses contain fire damage: visitors wandering through their rooms can marvel at the beautiful mosaic stone floors and lovely bowls and vases these occupants once used, and also see the ashes of the great fire that destroyed them and much of Jerusalem.

The Katros family home remains the most complete of these houses, and also contains the most well-preserved family objects. All the houses that were burned along with the Temple are moving, Dr. Avigad noted, “but not only was this (Katros family) Burnt House the first such discovery, its preservation of traces of destruction and fire and the quantity of objects found in it were never exceeded.”

For information on visiting the Burnt House Museum next time you’re in Jerusalem, visit https://www.rova-yehudi.org.il/sites/the-burnt-house/

The Heroes Among Us