The Lost Art of Prophecy 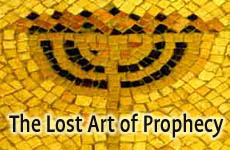 Prophecy ceased with the destruction of the First Temple in 586 BCE.

Isaiah, Jeremiah, Ezekiel. Who were these prophets?

A great mystery surrounds prophecy. What is the experience of prophecy? How do we know a prophet is "for real"? And does prophecy exist in our time?

A prophet is someone who has a direct line of communication with God.

A person proved himself as a prophet by accurately predicting the future, e.g. that God is about to miraculously suspend the laws of nature. (Talmud - Sanhedrin 89b) This must be done consistently, at least three times, just as Moses was given three signs in Exodus 4:9.

During the time of the Holy Temple, prophecy was part and parcel of Jewish national life. The Talmud says that during the First Temple period there were approximately 1.2 million prophets among the Jewish people. Rabbi Moshe Chaim Lutzatto explains that compared to the spiritual reality we experience today, the Temple period was "as different as the body and the soul." (Way of God 2.8.4)

What exactly is the experience of prophecy? Maimonides writes:

"There are many levels of prophecy. Just as one person may have greater intelligence than another, so one prophet can be greater in prophecy than another. Yet all of them see their prophecy in a dream or vision at night, or else during the day while in a trance....

"While experiencing prophecy, the limbs tremble, the body becomes weak, and he loses control of his stream of consciousness. All that remains in his conscious mind is a clear understanding of what he is experiencing at the time...

"The information in a prophetic vision is transmitted via allegory. The interpretation of the allegory, however, is immediately implanted in the prophet's mind, and he is aware of its meaning. Like the ladder that our father Jacob saw and the angels ascending and descending on it." (Foundations of Torah 7:2-3)

Maimonides further explains that only Moses, the greatest of all prophets, experienced prophecy while in a fully conscious state, and with a direct message not cloaked in allegory.

A prophet could be either a man or a woman.

The prophet was a Torah scholar and a holy person. To reach the prophetic state of consciousness required a long period of study, meditation and self-purification. As Maimonides writes: "Prophecy only occurs to someone great in wisdom, mighty in deeds and whom the material inclination does not control in any material thing. Rather he continually fortifies his mind against his inclination and is an exceedingly masterful intellect." (Foundations of Torah 7:1)

Prophecy was only possible while a person was in a state of joy. (Midrash - Bereishit Rabba 70:8)

Finally, prophets were personally observant of the Torah's commands, and encouraged others to do the same. Since the Torah states that all mitzvot remain binding forever, anyone coming to change the Torah is immediately identified as a false prophet. (Deut. 13:1-4)

What effect did prophecy have on Jewish daily life? In the time of the First Temple, God would immediately respond to our actions. If the Jewish people took a spiritual downturn, there would be a direct response such as a famine, plague, or lack of rain. If the Jews did teshuva, the situation would immediately change.

Someone who reached the meditative state called prophecy took on a special responsibility to help others grow. If you had a problem, you would go to a prophet and he would discern from the highest levels what aspect was holding you back. Even if you had a physical ailment, you didn't go to a doctor. Rather, you went to a prophet who would tell you what spiritual flaw brought about the sickness -- and how to correct it.

Can you imagine what it would be like to be understood at the deepest level of your soul? Can you imagine having the confidence of knowing that the advice you were receiving was flowing directly from the Almighty Himself? This is what life was like at the time when prophets flourished.

Prophecy as a widespread phenomenon ceased with the destruction of the First Temple in 586 BCE. After the time of Ezra and the Great Assembly (350 BCE), prophecy ceased completely from the Jewish people. In the future, prophecy will be restored with the coming of the Messiah, may it be speedily in our days.

With thanks to Rabbi Aryeh Leib Nivin and Rabbi Alexander Seinfeld

A Letter to My Beloved on Tisha B’Av

Reclaiming Biblical Jerusalem
It Takes A Lot Of Faith To Be An Atheist
How Instagram Brought Back This Nostalgic Soup
What Makes Eli Run?
Comments
MOST POPULAR IN Tisha BAv
Our privacy policy