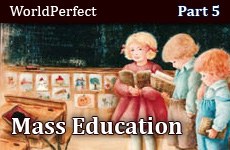 Today, we view education as one of the most basic responsibilities of any government toward its citizens. Moreover, we realize that an educated population is beneficial for its country. Ignorant people are generally limited in personal achievement and in their contribution to society. The benefits of education are obvious. The question is: Were they also obvious to the people of antiquity?

Let's return to the average peasants who constituted the overwhelming majority of the population. Consider all the people who lived during the past 5,000 years collectively.

Historians estimate that less than one percent of the people were literate. This means that over 99% of all humanity throughout history has been functionally illiterate.

Even the most advanced societies, like Greece and Rome, which did have a rudimentary education system, did not have free public education for the masses.

Why was the majority of humanity uneducated?

There are two main reasons for mass illiteracy throughout history. The first relates to the practical realities of life, and the second to the deliberate policies of governments. 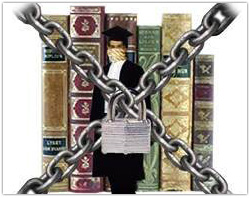 Today, we take our existence for granted. We may not be millionaires, but most of us live in houses with heat, electricity and indoor plumbing. We sleep through the night in peace (unless we have small children!). We wake up in the morning, take a hot shower, and then go to a kitchen which is stocked with foods. We climb into a car or bus, go to school or to work. We come home after our day, eat supper, and relax. We have vacations, leisure time, and retirement. We look forward to living long enough to see our grandchildren.

Most of us take this entirely for granted and don’t appreciate how amazing it all is!

In antiquity, the overwhelming day-to-day goal of the average peasant (and even many who live in some parts of the Third World today) was survival. Daily concerns included: An enemy shouldn't sack my village, rape my wife, kill me, and burn my house down. My wife shouldn't die in childbirth; my children shouldn't die young from all kinds of diseases. My crops shouldn't fail, or a drought or plague hit my village. The average person labored from dawn to dusk – no weekends, no vacations, no retirement. Life painted a pretty bleak picture.

With the goal of survival, who could afford to send their children to school? The youngsters who survived were needed to work in the fields. In addition, while both Greece and Rome had schools, education wasn’t free. Who had the leisure time and the financial resources to educate their children? Certainly not the average peasant. Historians estimate that the literacy rates in Greece and Rome were between 10%-15%.

By our modern standards that’s horrible, but compared to other societies of antiquity, it’s fantastic! Only the ruling minority, the nobility, and landowners could afford to educate their children. Yet, even many of them didn't bother. More than a few noblemen and monarchs, especially in the Middle Ages, were illiterate.

The one exception to this rule was the priests (not only Christian ones). In many cultures, the priest served a dual function as religious leader and scribe. His status was also above that of the common man. 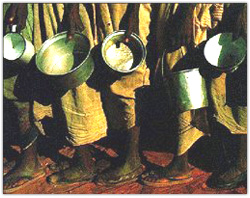 The second reason for mass illiteracy was to maintain control.

Education is power. Educated people are potentially dangerous. Who are often the revolutionaries in history? Who started trouble in America in the ‘60s and in Third World today? Students! They are young, idealistic and educated; they fill their heads with all kinds of dangerous ideas.

Even in the former Soviet Union, which provided universal, free education through graduate school, the government was very careful to control the material that was taught. Knowledge is dangerous – it can destabilize society. Ignorant people are far easier to control. We know it today, and people knew it thousands of years ago, too.

The written culture of antiquity was in the main restricted to a privileged minority... It should be obvious in Greece and to an even greater extent in the Roman Empire the illiteracy of the masses contributed to the stability of political order... The disturbances caused by the spread of literacy on the other hand, had been numerous and varied... The Greeks and Romans would have been very different people if, per impossible, they had achieved mass literacy. (William V. Harris, Ancient Literacy, Harvard University Press, 1989, 333-337)

So much for the concept of education in antiquity.

Part 7: Social Responsibility
The Connection between Israel and the Jewish People
Grit and Torah
Why We Can’t See True Reality
Comments
MOST POPULAR IN WorldPerfect