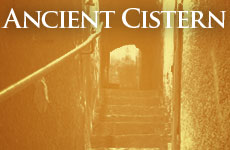 We now explore three waterways that supplied water to the Temple.

Developing a proper water supply system has always been a challenge for the Jerusalem area.

Throughout the centuries different aqueducts, pools and cisterns have been made to divert, channel and maintain water for the city and the Temple. We will now explore three waterways that brought and held water for the people, the Temple and their needs.

First, there is an ancient Hasmonean Water Cistern. Next, a Hasmonean aqueduct that brought water to the cistern near and under the Temple. And finally, the "Struthion Pool," which dates back to Herod's time.

The following illustration shows where these various water sources were in connection to each other and the Wall.

As we continue along the "Tunnel" we approach the Northwest Hill, where the street starts to rise upward. Here at the end of the First Temple a fortress called the "Baris" or "Tower of Chananel" was built. This fortress is mentioned in the Book of Nehemiah. The Baris was used as a palace by the Hasmoneans. The waterworks underneath the fortress were praised in a third century B.C.E.

Underneath the fortress were cisterns used by the people of the fortress. When Herod enlarged the Temple Mount northward, he leveled the Baris and actually dug into the bedrock, making it level with the rest of the Mount. Nothing was left of the Baris except for the water cisterns underneath, which Herod used. Water is, obviously, a priority to enable living in any area, and maintaining a consistent water supply in Jerusalem has always been challenging.

Herod kept part of the cistern as a reservoir for rain, but covered up the rest with the street that ran parallel with the wall. In order to ensure that people wouldn't fall into the cistern, he installed a large guardrail. Here to our left is the cistern, the guardrail, and to our right is the original stairway leading down into the cistern.

My hand trails along this ancient stone railing, its edge worn smooth by thousands of hands in centuries past. The cool stone is a pleasant contrast to the warmth of the air. The tunnel widens out ahead and suddenly we stop short in awe. Our eyes behold a full street, perfectly preserved, with pillars, ancient paving stones, water channels...

Kotel Tunnel
For Every Individual, A Torah Scroll
Allegiance To The Monarch
Meet the Real You: Yom Kippur
Comments
MOST POPULAR IN Seminars