Advertisement
aish.com > Seminars > Why The Jews

Hitler and the Nazis 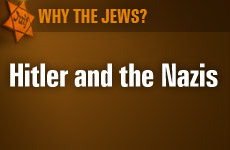 The best way to see what anti-Semites really hate is to examine their own rhetoric.

Removing the Jewish Element from Anti-Semitism

Almost without exception, the reasons for anti-Semitism offered by different scholars have nothing whatsoever to do with the fact that Jews are Jewish (e.g. Jews are rich or they're different).

These reasons effectively "de-Judaize" anti-Semitism by equating it with any other common type of hatred. According to this attitude, the Holocaust ― the most systematic attempt to exterminate a people in the history of humanity ― had nothing to do with "Jewish" reasons. Jews simply happened to have been in the wrong place at the wrong time.

In his book Why the Jews?, Dennis Prager cites a glaring example of an attempt to sell the public on the idea that there is nothing Jewish about anti-Semitism. On April 11, 1944, demonstrating an uncanny wisdom that far surpassed her age, Anne Frank wrote in her diary:

Who has made us Jews different from all other people? Who has allowed us to suffer so terribly until now? It is God Who has made us as we are, but it will be God, too, Who will raise us up again.

Who knows ― it might even be our religion from which the world and all peoples learn good, and for that reason and that reason alone do we now suffer. We can never become just Netherlanders, or just English, or representatives of any other country for that matter. We will always remain Jews.

Anne Frank made a point of stressing that Jews have something of special value to give to the world, and that is precisely what the world has resented in persecuting the Jews. Anne Frank identified anti-Semitism as a hatred of Jewishness, a loathing altogether different from the bigotry or racism that other peoples experience.

Amazingly, when Anne Frank's story was reconstructed by Lillian Hellman into a Broadway play, her words were completely changed. "Why are Jews hated?" asks Anne. "Well, one day it's one group, and the next day another..."

On Broadway, audiences were made to believe that Jews have been hated just as any other people has been hated. In other words, there is nothing Jewish about anti-Semitism.

But what do anti-Semites themselves say about this topic?

Scholars have made consistent attempts to prove that there is nothing uniquely Jewish that engenders Anti-Semitism. Let us see if comments from known Jew-haters reveal what they find so objectionable.

One individual who had no use for the multitude of whitewashed explanations offered by scholars was Adolf Hitler, the man responsible for the most devastating scourge of anti-Semitism in the history of mankind.

Hitler openly acknowledged the uniqueness of the Jews as a people. Hitler realized that Jews can never be successfully integrated with the rest of humanity, and he made it his objective to ensure that they never would be.

Hitler's form of anti-Semitism was not a means to an end; it was a goal in and of itself. The Nuremberg Laws, established in 1935, effectively disenfranchised and dismantled the Jewish community of Germany ― but this was not enough to satisfy Hitler.

In the late 1930s, Germany was rebuilt and its morale restored, but Hitler's eye remained trained on the Jews. Seven years after the Nuremberg Laws mangled and mutilated the Jews in body and spirit, the Final Solution was launched in the Wansee Conference of 1942. Hitler saw the Jews as something far more menacing than mere scapegoats; the Jewish nation was his mortal enemy, and so became his target for absolute destruction.

How is this renewal of mankind to take place? Hitler declared:

The struggle for world domination will be fought entirely between us ― between Germans and Jews. All else is facade and illusion. Behind England stands Israel, and behind France, and behind the United States. Even when we have driven the Jew out of Germany, he remains our world enemy.

Why Did Hitler Target the Jews?

Eliminating the Jews was the key to Hitler's utopia. His driving ambition was to free the world from the shackles of conscience and morality; to turn the world away from monotheism. He fashioned his own brand of religion out of a philosophy based on indulging all of man's basest desires. The "Hitler Youth" sang this song:

We have no need for Christian virtue.
Our leader is our savior.
The pope and rabbi shall be gone.

We shall be pagans once again.

Hitler's picture of the perfect world was a return to a state of jungle-type existence, where "might makes right." He said:

In a natural order, the classes are peoples superimposed on one another in strata, instead of living as neighbors. To this order we shall return as soon as the after-effects of liberalism have been removed.

The only serious obstacle standing in Hitler's way was the Jews. Hitler knew that it was the Jews who carried the message of one God ― of all men created equal; of love your neighbor; of helping the poor and the infirm.

Hitler hated the message of the Jews because it was diametrically opposed his vision of what the world should be. He said:

They refer to me as an uneducated barbarian," Hitler said. "Yes we are barbarians. We want to be barbarians; it is an honored title to us. We shall rejuvenate the world. This world is near its end.

Providence has ordained that I should be the greatest liberator of humanity. I am freeing man from the restraints of an intelligence that has taken charge, from the dirty and degrading self-mortifications of a false vision known as conscience and morality, and from the demands of a freedom and personal independence which only a very few can bear.

In Every Jew's Soul 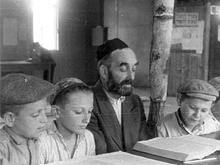 Hitler's only real target was the Jews, because they were all that stood between him and success. So long as the Jews survived, Hitler could never triumph. The Jewishly-rooted concepts of God and morality had taken hold in the world, and Hitler knew that either his own ideologies or those of the Jews would prevail. The world would not abide both.

The Ten Commandments have lost their vitality. Conscience is a Jewish invention; it is a blemish, like circumcision.

Furthermore, Hitler knew that the Jewish threat to his ideals is embodied in every single Jew. He said:

If only one country, for whatever reason, tolerates a Jewish family in it, that family will become the germ center for fresh sedition. If one little Jewish boy survives without any Jewish education, with no synagogue and no Hebrew school, it [Judaism] is in his soul.

The Jewish spirit, Hitler explained, is the product of the Jewish person. Destroying their holy places alone would not be enough. In Hitler's words:

Even had there never existed a synagogue or a Jewish school or the Old Testament, the Jewish spirit would still exist and would exert its influence. It has been there from the beginning, and there is no Jew ― not a single one ― who does not personify it.

Click here to read the next installment of "Why the Jews?" ― an exploration of the Jewish view of anti-Semitism.

The Big Six
Why Are The Prayers Of Yom Kipur So Repetetive?
Ha'azinu 5783: A Time for Unity!
Twisted Thinking
Comments

MOST POPULAR IN Seminars