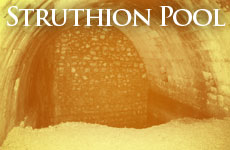 At the end of the Hasmonean aqueduct is a large pool called the Struthion Pool.

At the end of the Hasmonean aqueduct we come to a large pool (approximately 171 X 46 feet) which collected rainwater from the northern section of the aqueduct. The pool was called "Struthion," which means "lark," being that it was one of the smaller public pools in Jerusalem during the Herodian period. 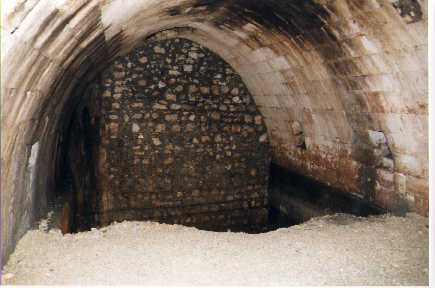 The pool served as a moat for the northwestern corner of the Antonia Fortress. Prior to the pool's construction, the aqueduct ran from the north into this area servicing the city and the Temple Mount. When Herod expanded the Temple area, he blocked off the southern side of the aqueduct, and the pool was split into two parts. The northern sectioncontinued to bring rainwater into the pool, but the southern section no longer had any function. 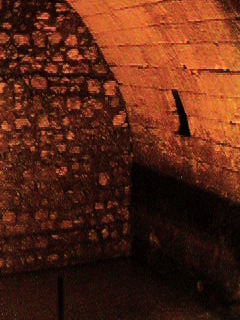 After the defeat of the Bar Kochba revolt in 135 C.E., the emperor Hadrian turned the entire pool area into a market place. They managed to cover the pool, first dividing it into two with a wall along its length, and then placing two arches fanning out in opposite directions from the walls. On top of these arches they built the square on the platform used for the market.

The pool went through another change in the 19th century. When the foundation for the Convent of the Sisters of Zion was being dug, they discovered the ancient pool and aqueduct. 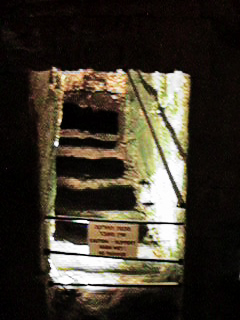 The nuns had another wall built, splitting the pool again, width-wise, to prevent strangers and explorers from entering into their convent through this basement.

The northern side of the aqueduct after the Struthion Pool is not accessible to exploration, being cut off by the convent.

With this we come to the end of the excavations. The excavators originally wanted to exit via these steps from the time of Hadrian, but due to political pressures, this exit had to be abandoned for another accessed by the recently cut tunnel to the right.