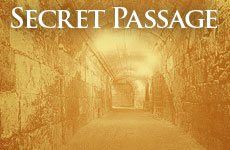 The fluorescent brightness of modern life falls away as we descend inside the tunnels.

The fluorescent brightness of modern life instantly falls away. We are inside the tunnels now. Right away we sense that we are in another world. Surrounded by the cool, dark aura of this ancient place, you feel an air of expectation and discovery...

We walk slowly into an area known as the Secret Passage. Its name comes from a medieval legend of an underground walkway used by King David. The king could use it to travel unseen from his palace at the Citadel (west of here) to the Temple Mount.

That legend was wrong. 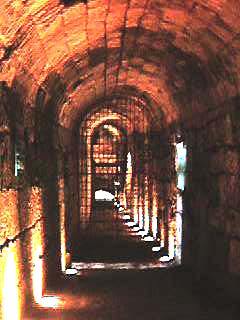 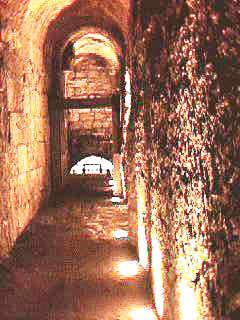 We now know that the citadel was actually a Crusader castle and that these vaults originated with the Arabs in the late 12th century C.E. This vault system was built to raise the level of the city and allow Moslem residents direct access to the Temple Mount.

The space under the vaults was locked off in sections and turned into water cisterns. 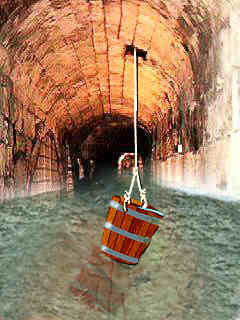 Notice the openings in the stonework of the ceiling. Ancient water cistern People would lower vessels into a water supply directly under their houses. Pretty handy having your water just under your feet!

As we move through this place, you begin to feel a quiet sense of awe. Our footfalls are muffled by the earth and by eons of time that have come and gone, century upon century, conquerer upon conquerer...and always the Jews remained, returning to their eternal home.

So much to see, so much to take in, but we have far to go and cannot linger. This passageway ends abruptly in a pile of unexpected rubble, a silent memorial to what it was like here for hundreds of years before the dig.

We turn left for several yards, take a few steps down into a chamber, turn back...and suddenly we hear the sound of prayers from the Western Wall. 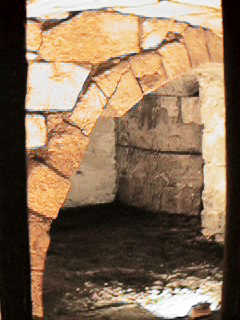 You move closer for a better look. Through a wrought-iron grate, a large chamber is visible, filled with all types of people praying, some in groups, some alone, pouring their hearts out to G-d. You feel an expectant hush in the people next to you, who are also taking in this quietly stirring vision.

The ceiling of this tranquil place is dominated by a huge arch...