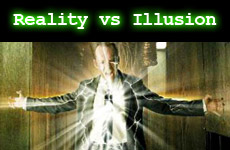 "You have to see it for yourself... Remember, all I'm offering is the truth, nothing more..."

Neo: What are you trying to tell me, that I can dodge bullets?

Morpheus: No Neo. I'm trying to tell you that when you're ready, you won't have to.

This world is an illusion. Generated by a higher dimension of reality.

In Kurt Vonnegut's novel, Breakfast of Champions, Kilgor Trout is having a drink in a bar when suddenly he feels that an awesome presence is about to enter. He begins to sweat.

In walks Kurt Vonnegut, the author, and the character finds himself face to face with his creator. Kilgor's perception of his world is changed forever. He realizes that he does not exist independently, that every moment of life requires a new stroke of the author's pen. Without the author, he ceases to exist.

He grasps that there is a higher dimension more real than the world of the novel. His entire universe is an expression of Kurt Vonnegut, who is the source of that world.

Every molecule, every detail is being created anew this moment. Nothing is static. Our entire world is an expression of a Higher Source. There is a Master Programmer, beyond the Matrix, and the universe is His program.

Olam, the Hebrew word for "world", is from the root meaning "hidden". The world is God's mask. Peel back the layer of this world and look beyond the Matrix to get a glimpse of The Programmer.

Morpheus:
This is a sparring program, similar to the programmed reality of the Matrix.

It has the same basic rules, rules like gravity. What you must learn is that these rules are no different than the rules of a computer system.

Some of them can be bent. Others can be broken... How did I beat you?

Neo: You're too fast.

Morpheus: Do you believe that my being stronger or faster has anything to do with my muscles in this place? You think that's air you're breathing now?

The rules of Nature are just God's software.

Gravity is part of that "matrix". It's part of the illusion. A miracle is simply over-writing the program. 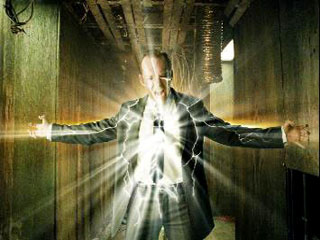 Beyond the Matrix, who says fire must burn? A select few throughout history have transcended the Matrix of this world, breaking the rules and rewriting the program.

When the Jews stood at the Red Sea, they didn't have to dodge the water. They went right through it.