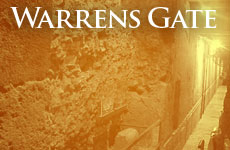 Warren's Gate was one one of the major entrances to the Temple Mount.

We now come to an area that was once one of the major entrances to the Temple Mount. Today it is referred to as Warren's Gate, after 19th century British archaeologist Charles Warren, who conducted extensive explorations of the Wall in 1867. 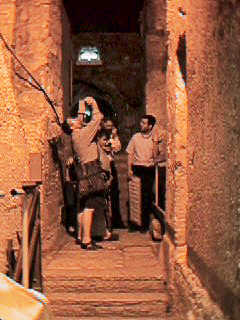 If you glance down at the floor, you'll notice that the stones are the original paving stones from the Herodian Street that ran parallel to the Western Wall – and still no potholes!

Notice that the street has a slight incline running from north to south. The higher part is Mount Moriah.

The street itself is the result of some impressive engineering. The original topography was much steeper than the existing street. To counteract this, the Western Wall was first built on the bedrock. Then, in certain places, dirt was brought in to fill in the area. After that, the floor was put in place, leaving the slight incline you see today.

For centuries, this area remained open and accessible to all. In fact, the gate was used as a synagogue for over 450 years, until the Crusadersconquered Jerusalem in 1099 and ordered the expulsion of the Jews.

When the Moslem leader Saladin recaptured Jerusalem in 1187, the area was covered over and became completely inaccessible.

For centuries afterward, Jews never gave up the dream of returning to this site and being able to pray at this entrance again. Today, that dream has come true. If you look up, you'll see that a synagogue has been set up by this entrance.

Once again, you find yourself pausing to take it all in. What does it mean to utter a thousand years of prayers?

Once this place teemed with people streaming in and out of the Temple. Now, in the slight coolness and quiet of this place, you have the chance to reach out to those same yearnings. You are a Jew walking along the Tunnels of the Hidden Kotel, standing, literally, at the gates of prayer...

Moving ever deeper into the tunnel, we see a a table strewn with prayer books. We come upon a quiet, modest area, lit by candles.  You feel yourself growing even quieter, welcoming the hush that surrounds the area, curiously hopeful...

We are now directly across from the Holy of Holies...