The Horse in the Gate 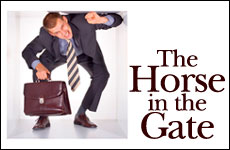 Why you are never stuck.

I used to empathize with the horse in the gate. The only way for a car to exit the walled Old City of Jerusalem, where I live, is through Zion Gate. Like all authentic ancient gates, Zion Gate is a massive L-shaped stone structure. My 21st century car has a hard time maneuvering through the 16th century gate, especially when it is thronged with tourists. My car, however, has it easy compared with the horses of yore trying to invade the city.

A hole in the ceiling of the gate was used to pour boiling oil down on the invading horsemen. If the horse slowed down to make the L-turn, the horseman would be fried by the boiling oil and the horse would slip and fall. If it galloped fast to avoid the oil, it would smash into the stone wall. It was doomed if it did and doomed if it didn't.

I often feel like the horse in the gate. No-win situations abound in my life and, I suspect, yours. The morning when you have an important meeting at work with a visiting V.I.P., your child takes sick and needs you at home. Just when you've blown your budget paying for holiday expenses, your washing machine breaks down and needs an expensive repair. Rushing to an interview for a new job, late because you couldn't find a parking space, a woman in a wheelchair asks for your help. Your spouse splurges on two tickets to a concert to celebrate your birthday and, just as you're leaving, your mother-in-law calls complaining of chest pains that are either indigestion or a heart attack.

When we feel trapped without any recourse, our worst self manifests. We actually become the snorting, rearing beast in the gate.

The most dramatic scene in the Torah is just such a "horse in the gate" scenario. Three days after the Children of Israel made their Exodus from slavery in Egypt, Pharaoh changed his mind and led his army after them. When Pharaoh's chariot forces caught up with the Israelite men, women, and children, they were camped beside the sea. With Pharaoh's army behind them and the sea in front of them, the people had nowhere to escape. Thinking their doom was sealed, they panicked.

Then, just at the critical moment, God intervened. He split the sea, let the Children of Israel walk through on dry land, and restored the water in time to drown the pursuing Egyptian army.

This Biblical prototype teaches us a profound lesson. At first glance, the horse in the gate scenario seems to have only two players: the invading soldier on his charging horse and the defending soldier poised to pour down his pot of boiling oil. From a Jewish perspective, however, there's always a third player: God.

In a God-directed world, there are always infinite possibilities.

Judaism believes in a God Who is intimately involved in His world. Everything is determined by the Divine Will except the moral choices that human beings make. In a Godless world, the horse and rider would be doomed to fry or smash, but in a God-directed world, there are always infinite possibilities. God could, for example, as the horse enters the gate, give the soldier holding the pot of oil a coughing fit, or he could feel a sudden urge to eliminate, or he could be felled by an invader's arrow.

In a God-directed world, you could choose to stay home with your sick child, and the V.I.P. you were supposed to meet that day could have been detained in Tokyo for 24 hours. If you overcome your temptation to dip into the charity fund, in a God-directed world you could be surprised by a check in the mail from a friend paying back an old loan. If helping the woman in the wheelchair makes you late for your job interview, you could be sitting opposite the disapproving personnel director when the interview is interrupted by a visit from his wife -- the woman in the wheelchair. In a God-directed world, there are infinite possibilities.

The antidote for the panic of the horse in the gate is to repeat four simple words: "God runs the world." This does not mean relying on miracles. It does not mean abdicating responsibility. It does mean choosing to do the right thing and relying on God to take care of the rest. The recognition "God runs the world" is the invincible steel cable that keeps the elevator of our moral standard from plummeting.

Once you have chosen to do what is right and have prayed for Divine assistance, God may make things work out as you wanted or He may not. Yes, helping the woman in the wheelchair may make you late for the job interview and cause you to lose the job. But perhaps a better job is waiting for you... or perhaps this job would have posed ethical tests that you are not strong enough to pass... or perhaps this high-paying job would have taken too much time from your family...

Recognizing that God runs the world doesn't mean that we always get what we want, but rather that we get what is best for us.

When we fail to let God run our lives, we get stuck like the horse in the gate. Our possibilities are limited and our lives are constricted.

THE HOUSE OF MY DREAMS

Shortly after getting married in 1987, my husband and I moved to the Old City of Jerusalem. We rented an apartment, with the intention of buying an apartment at the end of our year's lease.

In those days, taking a mortgage in Israel meant financial suicide, because both the interest and the principal of the mortgage were tied to "the index," Israel's double-digit inflation rate. So, you could take out a $100,000 mortgage and two years later find that you owed $130,000 on the principal. We heard horror stories of people who were swallowed up by such mortgages. We resolved to buy an apartment only for the sum we had in the bank.

The problem was that all the apartments for sale in our price range were small, cramped apartments. After months of searching, I gave up. We decided to just rent for another year. Six weeks before our lease expired, simply for protocol's sake, I called the owner, who had never lived in the apartment, to make sure we could renew our lease. He informed me that he would be moving into the apartment.

Suddenly we were the horse in the gate.

Panicked, I called the real estate agent to rent another apartment in the Old City. There was nothing available.

Suddenly we were the horse in the gate. We couldn't stay in our rented apartment, and we couldn't afford to buy an apartment that was big enough for us.

Then it hit me: Why were we limiting God? God runs the world, and perhaps He had a nice, large apartment that He wanted to give us. I prayed hard, then called the real estate agent and told her: "We want to buy the apartment that God wants to give us. Just show us our apartment; it doesn't matter the price."

Our apartment, I told her, had to have a large living room where we could hold classes and Shabbatons, had to have three bedrooms, and had to be on the ground floor so that my mother and father, who suffered from arthritis, could someday live with us. I secretly wished for one of the Old City's ancient structures with domed or vaulted ceilings, but that was not a requirement.

One morning soon after, the real estate agent showed us our apartment. It had all our requirements—plus high vaulted ceilings. Its price was exactly double what we had.

My husband and I each called our fathers and asked for loans. They magnanimously gave us the money outright, as "an advance on your inheritance," they told us.

That left us $20,000 short of the asking price. We told the real estate agent to make an offer for the sum we had. "They won't take it," she told us with authority. The owners, Mr. And Mrs. Kagan, had had the apartment on the market for over a year, and were not willing to budge on the price.

"God runs the world," I reminded her (and myself). "Please phone them with our offer. Tell them it's our maximum offer. Take it or leave it."

Two days later, she got back to us, her voice filled with wonder. The Kagans had told her that their married daughter, who lived on a moshav, had just found a house she wanted to buy. They needed cash quickly to help her buy it before she missed the opportunity. They were willing to accept our offer.

Two weeks after we closed the deal, I went with Mrs. Kagan to transfer the utility bills into our name. I asked her when her daughter would be moving into her new house. Mrs. Kagan frowned and replied, "That house fell through. She's not moving after all."

A world run by God is a world of infinite possibilities. We are never stuck like the horse in the gate.

Walking Through the Valley of Death

A Life-Saving Kindness in Rome

In Search of the Perfect System

Sparks of Holiness, Rekindled
Saadiah Gaon, Rashi and Maimonides: How Three Rabbis Revolutionized Judaism
King Sennacherib and the Siege of Lachish
Three Small and Easy Changes to Add Positivity in Your Home
Comments