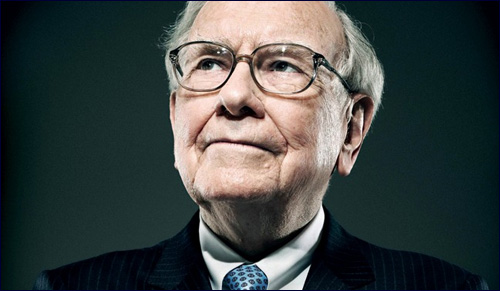 A good friend of Warren Buffett was having dinner with Warren and a dozen others right before the New Year. As they discussed different upcoming events and meetings, Mr. Buffett pulled out a small, personal planner for 2017.

“Do you want to know what I have in my daily planner?” Everyone at the table leaned forward, eager to see what was in the planner. He held the planner up and showed them blank page after blank page. “I have nothing planned. Nothing. I need all the time I have to learn and think.”

Everyone at the table sat there silently for a moment as they thought about their overflowing calendars. Mr. Buffett was living one of the quotes for which he is well known: “Invest as much as you can in yourself. You are your biggest asset by far.” When Buffett is asked what he does with most of his time, he answers that he reads. He reads all day, and he thinks. That seems to be how he comes up with his greatest ideas. But it’s also how he has grown into one of the most giving, thoughtful leaders of our generation.

Here are some more gems of wisdom from Warren Buffet:

1. On Israel: “You can tell prospective investors that I would have taken a perpetual bond if you had offered one. I believe Israel is going to be around forever. If you are looking for brains, energy and dynamism in the Middle East, Israel is the only place you need to go.”

2. Investing in the next generation: “Someone is sitting in the shade today because someone planted a tree long ago.”

3. Lessons from yesterday: “In the business world, the rearview mirror is always clearer than the windshield.”

5. Protect your good name: “It takes 20 years to build a reputation and five minutes to ruin it. If you think about that, you’ll do things differently.”

6. Developing habits: “Chains of habit are too light to be felt until they are too heavy to be broken.”

7. The value of family: “Basically, when you get to my age, you’ll measure your success in life by how many of the people you want to have love you actually do love you.”

8. Money and character: “Of the billionaires I have known, money just brings out the basic traits in them. If they were jerks before they had money, they are simply jerks with a billion dollars.”

9. What matters is what you do today. “The investor of today does not profit from yesterdays’ growth.”

11. On love: “The only way to get love is to be lovable. It’s very irritating if you have a lot of money. You’d like to think you could write a check: I’ll buy a million dollars’ worth of love. But it doesn’t work that way. The more you give away love, the more you get.”

12. On what’s important: “If you get to my age in life and nobody thinks well of you, I don’t care how big your bank account is, your life is a disaster.”

13. On mentors: “The best thing I did was to choose the right heroes.”

14. On thinking for yourself: “A public opinion survey is no substitute for thought.”

Warren Buffett still resides in his modest home in Omaha, Nebraska that he bought before he became wealthy. He has donated millions of dollars to Israel and has earmarked the majority of his wealth to nonprofits. As his son Peter, a musician and an author, remarked: “My father transferred values to me, not wealth. He doesn’t believe in inherited wealth. His management style is the way he is in life. In a business environment, he finds great management and says ‘I believe in you’ and then leaves them alone. That’s the kind of father he is too. I would have never found my own success if I knew that my father was there to bail me out.”

Daring Rescue in the Thailand Cave

Suddenly Goodbye
The Promise Of The Land
Which Chat Are You On?: Parshas Behar/Lag Ba’Omer
Do You Like Slow-Cooked Food? Thank the Jews
Comments