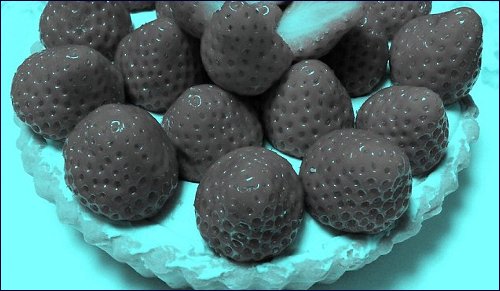 Sometimes looks can be deceiving. 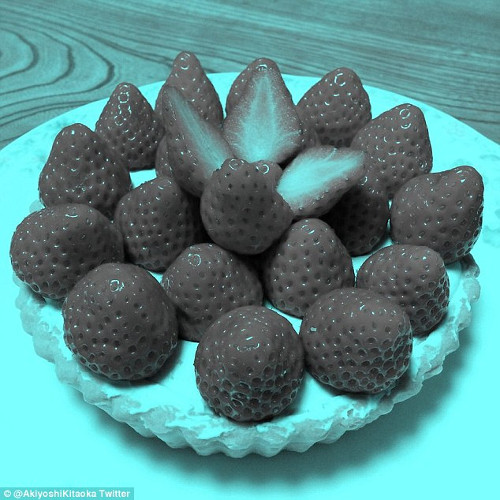 Are the strawberries in the photo above red?

The latest internet sensation is this picture of a luscious-looking tart covered with red strawberries. But the photo doesn’t use a single red pixel. The strawberries are not red.

This optical image was shared by Psychology Professor Akiyoshi Kitaoka in Japan and quickly went viral. “Although this image (is) all made of the pixels of cyan (blue-green), strawberries appear red” Prof. Kitaoka explained on Twitter.

Proving that the picture contains no red, some people have isolated parts of the strawberries that appeared red on their computer screens, placed them on a white background and only shades of gray and blue appear, like the image below. 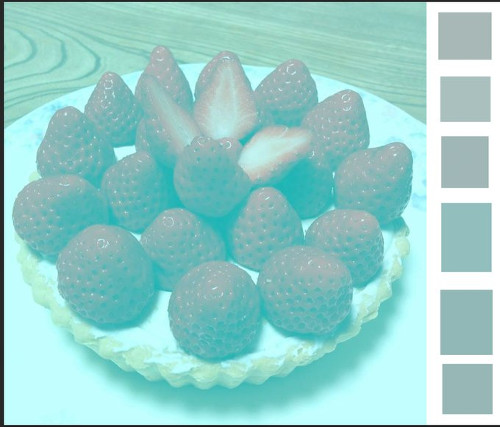 Carson Mell isolated a few of the colors that appear most "red" in the strawberries and put them on the white background to the right.

The strawberries appear red because of color constancy – the human brain is designed to perceive the same colors under a range of circumstances. Whether you’re outside in bright natural light or inside in a dimly-lit closet, the brain works to color correct, ensuring you see constant colors. So even though the image of the strawberries consists of gray and greenish pixels, you still see red strawberries.

In other words, even when we think we are seeing things as they really are, a host of other factors – light, surrounding color, our environment – are all affecting our perception of reality. “Our sensory systems are amazing” explains Dr. John Krantz, a sensory psychologist at Hannover College in Indiana. “We think we’re taking in the world as it is and missing all the complexity behind what it takes to make that happen.”

According to Dr. Aude Olivia, a cognitive scientist at MIT, that sense of the unexpected is why we enjoy optical illusions so much. We are hardwired to want to learn new things but much of the time we operate on auto-pilot, not really observing the world around us. Optical illusions shake up our perceptions of the world, allowing us to notice things afresh.

The viral strawberry picture took the world by storm just in time for Purim, the Jewish holiday that celebrates the unexpected and encourages us to look at the world in a completely fresh way.

Nothing was the way it seemed; the very things devised to destroy the Jewish people were the instruments used to save them.

The primary theme of Purim is “v’nahafoch hu” – the Hebrew term for things being turned upside down. Nothing is as it appears. Esther, the Queen of Persia, is really a secret Jew named Hadassah. Mordechai, the arch-enemy of Haman, ends up receiving the king’s honor by paraded around town, by Haman no less. Haman ends up being hanged on the very gallows that he erected to hang Mordechai. The Jews of Persia, under mortal threat, emerge victorious. Purim, the day marked for death and destruction for Jews, is flipped over into a day of feasting and gladness instead.

The entire Purim story took place over a span of nine years. It’s only with hindsight that a series of seeming coincidences – Esther becoming queen, Mordechai being in the right place at the right time to save the life of the king, and other occurrences – was revealed to be part of an overarching Divine plan. Nothing was the way it seemed; the very things devised to destroy the Jewish people were the instruments used to save them.

The miracles of Purim weren’t flashy; there was no parting of a sea, no plagues descending from the heavens. In fact, the name of God doesn’t even overtly appear in the Book of Esther. The miracles are hidden. Purim reveals how every step has profound meaning and is being orchestrated by God’s guiding Hand. There are no coincidences.

On Purim, we revel in this concept that things are not always what they seem, dressing in costumes, reading the topsy-turvy story of Purim, and eating traditional foods like hamentashen which “hide” their fillings inside.

Like the red strawberries, Purim reminds us that appearances can be deceptive and forces us to look at the world in a different – and deeper – way.

Happiness and Adar
Blessing on Chewing Gum
Was Rahab a Prostitute?
Extras In Our Own Epic
Comments
MOST POPULAR IN Current Issues
Our privacy policy