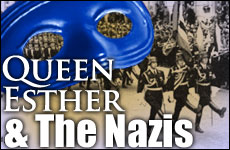 I never doubted that the God who watched over my grandmother in Nazi Germany would watch over me as well.

Life in Frankfort in the 1930s was like the morning before a thunderstorm -- clear blue skies and a brisk breeze, with threatening gray clouds massed on the horizon and ominous rumblings of thunder in the distance. Nevertheless, the Jews of that city managed to maintain a normal existence, and their children for the most part enjoyed a carefree childhood. The famed Hirsch Realschule continued to educate children as it had for generations, while being careful to keep the Jewish children off the streets when the gentile children got out of school.

In such a society did my grandmother, Berta, and her siblings grow up. Raised in a proudly Orthodox home, she absorbed at a young age the lesson imparted by the fraulein in school: "Gutt is uber alles" -- God is over us all.

As the years passed and Hitler rose to power, many Jews attempted to leave Germany before it was too late. Although some managed to escape, it was soon clear that for the vast majority there were precious few places to run. The world was turning its back on the Jews. The wise fraulein would say to Berta's class, "There is nowhere left for us to go. Gutt is uber alles. God is over us all. If He wishes to save us, He will."

Berta's father, a Polish emigre, was shipped to the concentration camp of Sachsenhausen, from where many never returned. Frantic, as their father's fate hung in the balance, Berta's family discovered that many detainees were being granted their freedom on the condition that they leave the country immediately. But where could they go? The doors of the world's great democracies were slammed shut in their faces.

Berta's family managed to obtain false Venezuelan visas, and thus armed, the 16-year-old Berta made her way to the SS headquarters to plead for her father's life. She was granted his freedom on the condition that he leave the country within 24 hours. Germany does not have many ports, however, and that day only one ship, the Orazio, was leaving the country from Hamburg. Berta contacted the shipping company in the hopes of securing place on board for the family, or at the very least for her imprisoned father, but the anti-Semitic shipmaster refused to allow a Jew on board. The desperate family pleaded for standing room in any corner available, even in the bathrooms, but to no avail.

Defeated, Berta returned the next day to SS headquarters, only to be greeted by an incredulous Nazi captain. "Are you still here?" he questioned, and then burst out laughing. "Your God must be watching over you. The ship that you did not board yesterday exploded as it left the harbor." Impressed with Berta's courage, he permitted the family to travel to Italy, where they boarded the Augustus, the last ship to leave Europe before Italy joined the war. As the ship steamed towards the unknown world of Venezuela, Berta once again repeated her teacher's wise words, "Gutt is uber alles. God is over us all. If He wishes to save us, He will."

Although the story of her family's survival was devoid of obvious miracles, Berta always recognized God's presence in her life.

Throughout the years, Berta never doubted the hand of God in her life. Compared to the stories of many other survivors, (including her own husband), her story seems tame, almost commonplace. Her entire family simply left Europe before the full fury of the Holocaust was unleashed. The fact that they narrowly avoided being blown to bits in the Hamburg harbor can be attributed to mere coincidence, a fortunate, but in no way miraculous, occurrence. To Berta, however, the Divine Hand guiding her footsteps has always been clear. Although the story of her family's survival was devoid of obvious miracles, Berta always recognized God's presence in her life.

Over the next half a century, she trained generations of her children, grandchildren and students to do the same; and many of her acquaintances, Shabbos guests and students attribute their commitment to Judaism to her. Her students remember her warmth, her dedication, and her unswerving belief in the Almighty. In her inimitable German accent, she taught them all to say, "Gutt is uber alles. God is over us all."

This month we celebrate the holiday of Purim and read Megillat Esther, which chronicles the survival of the Jewish people in ancient Shushan. Megillat Esther is among the books of the Torah in that the name of God is not mentioned at all. The megillah contains no obvious miracles; its events can be read as a combination of lucky coincidence and chance historical events. It was mere chance that a drunken King Achashverosh ordered his wife Vashti killed and unknowingly appointed a Jewish woman as her successor. Fortunate coincidence determined that Mordechai saved the life of the king, and that the wicked Haman came to request his execution on the very night when King Achashverosh had decided to reward him. All the random events of the megillah combined to affect the salvation of the entire Jewish nation without one mention of the name of God.

Queen Esther, however, never doubted His Hand, and established Purim as a day to acknowledge God's constant, though hidden, presence in our lives. (Indeed, many communities and families throughout the ages have established private Purims in order to commemorate a personal salvation.) To me, it is no coincidence that my Bubby Berta was born on the first day of Adar, and on that very day, 17 years later, escaped the shores of Europe with her family. Like Queen Esther of old, her story contains no obvious miracles, but her faith in the hand of God has been unwavering. And like Queen Esther, she gave over her belief in God's constant presence in her life to the coming generations. Like all of Bubby Berta's grandchildren, I grew up never doubting that the God who watched over my Bubby in Nazi Germany would watch over me as well.

In my own personal, though hidden, miracle, my oldest daughter was born on Bubby Berta's birthday; a further validation of what she has always taught me. Gutt is uber alles. God is truly over us all.

Shoshana Greenspan holds an MS in special education and has taught in a number of Jewish institutions. She also works as a writer for a number of publications and organizations. She lives in Jerusalem with her husband and children.

Purim in Auschwitz
Is Grease the Word?
Dried Fruit Compote
Scientific Curiosity and the Divine Encounter
Comments
MOST POPULAR IN Spirituality
Our privacy policy
Aish.com Is Looking for Great Writers