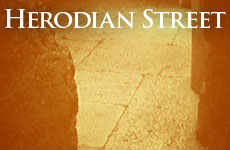 Originally a promenade that ran the full length of the Western Wall. 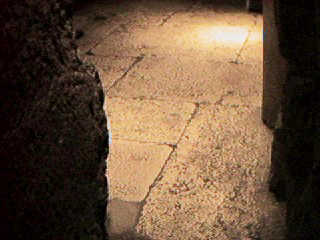 We leave the cistern area, and are delighted with the full beauty of the Herodian Street. This originally was a promenade that ran the full length of the Western Wall. Notice the well-planned and paved stones of the flooring.

Strangely, one huge paving stone was never incorporated into the floor. Was it left here in haste as the Roman army advanced? If stones could speak! What stories it could tell, waiting here century after century for the Jewish people to return. 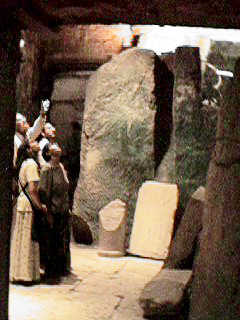 During the rainy season the gutter in front of us channeled water into the Hasmonean Cistern, which was used by Herod. During good weather people would stroll along the wall with the guardrail running along the open pool of the cistern.

Looking up, you see the vault system built in the 14th century. Try to put yourself even further back in time, back 2,000 years ago, with the sky above us.

They were also able to stroll west, away from the Western Wall. The two pillars on the left date back to the Second Temple. When this area was excavated, they found additional pillars behind these two. 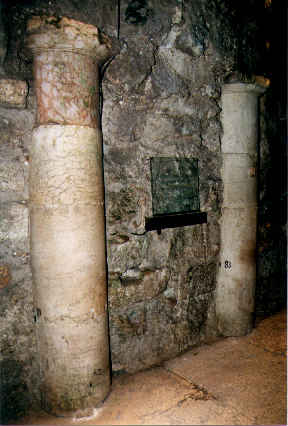 Most archaeologists take this as evidence that a major street ran perpendicular to and away from the Wall, toward the west. It may have been a market or some other public gathering area.

When the Mamelukes took over Jerusalem, they simply incorporated these structures into their own buildings, as did those regimes who followed. But where did the original stones come from?

The answer lies just a few feet ahead.

Holy of Holies
Vayelech 5783: Regret and Repent
Rabbi Sacks: Focus On the Important, Not the Urgent
Put Your Foot Down: Are Human Feet Poorly Designed?
Comments
MOST POPULAR IN Seminars