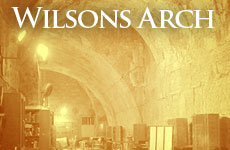 At the time of the Second Temple, a huge bridge connected the upper city of Jerusalem to the Temple Mount. 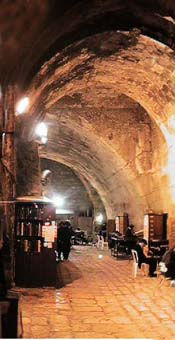 This bridge also supported an aqueduct that brought water to the Temple for use in the daily service. This was a remarkable engineering feat as the water source in Hebron many kilometers away is only slightly higher than the Temple Mount.

According to Josephus, the Jews themselves were forced to destroy this bridge during the war against the Romans in order to make it more difficult for their legions to reach the Temple. ( Read the actual account of Josephus.)

Later, in 132 C.E., during the reign of the Roman tyrant Hadrian, Jerusalem was tragically transformed into a center of pagan worship and renamed Aelia Capitolina.

At that time, the Romans rebuilt the bridge on the earlier foundations, using two parallel arches for support instead of the one original arch. The remains of the first bridge and some of the earlier stones that had been left in place since the original destruction were used in the construction of the second bridge.

Wilson's Arch, which is connected to the Western Wall, and a few others that have distinctive Herodian style, are believed to be the remains of the original bridge.

After the arches were complete, the space underneath could be used as rooms and other areas. What were these rooms like? How were they used? Who were the people that walked this ground?

Once again, you find yourself dwelling on what it must have been like, the life those people lived all those eons ago...our ancestors, fellow Jews, really...the pagan Romans...you find yourself hoping for a deeper glimpse into those times.

For a truer sense of what it was like, let's take a slight detour to explore one of these rooms, the Public Room, also known as the Hasmonean Room.

Quarry and Aqueduct
Vayelech 5783: Regret and Repent
Rabbi Sacks: Focus On the Important, Not the Urgent
Put Your Foot Down: Are Human Feet Poorly Designed?
Comments
MOST POPULAR IN Seminars