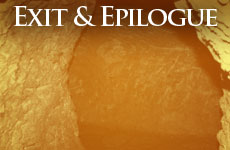 As we near the exit, we can't help but marvel at the modern miracle of the Jewish people's return to their land.

Archaeologists were able to connect the Western Wall and aqueduct tunnels nine years ago. Since that time, the Tunnel tours have been hoping to allow people to exit the tunnels from here, instead of having to return all the way back to the beginning of the tour.

However, this request was repeatedly denied by the Moslem religious authority. Logistically, this severely limited the number of people who come through the tunnels since most places on the tour are only large enough for one-way traffic.

In the 1990s, construction began to open a small tunnel leading up to the Via Dolorosa. In September 1996 the exit was opened, enabling thousands of additional tourists access to the Tunnels.

We are all aware of the days of violence that followed -- sparked by angry Palestinian claims that the Tunnels had excavated under the Dome of the Rock.

Having been through the Tunnels yourself, you can see that this simply is not the case. The Tunnels are not located under the Temple Mount or any Muslim holy site.

Nevertheless, the opening of an exit to this wonderful site was cynically used as yet another excuse to criticize Israel in the eyes of world opinion. Tragically, many people on both sides died because of this lie.

But for a few more moments you are still in the dark calm of the Tunnels. You begin to hear the strange, modern sound of the exit turnstile, which chimes like a bell as people go through -- as if each tone were counting the centuries forward as you move closer to the outside world... the First Temple, the Second Temple, the Hasmonean Jews, the Romans, the Mamelukes, the Crusaders, the Moslems, the Turks and the British... all of them have come and gone, literally building on top of one another... and still the Jewish people remain.

As you near the metal of the turnstile, the "clack, clack" of its turning so strangely out of place amid all these ancient stones and dreams, you can't help but marvel at the modern miracle of the Jewish people's return to their land, and the wonderful opportunity we have, in our own time, to connect to our heritage, to learn about our people, in the holy city of Jerusalem...

You emerge in the bright sunlight of the Via Dolorosa, with the quick and earnest thought that you would like to go back, back to the Kotel, right now, and take a few moments more to gather your thoughts in prayer...

Thank you for visiting!

We have just journeyed through thousands of years of the human experience.   Our footsteps have traced the path of countless who have lived their ideals and died for them. Today, we stand on the brink of new finds,  discoveries that will not simply illuminate new paths to who we really are.

What was the common link of these generations of Jews? Was it a shared lineage? A commonality of history? There seems to be much more. Perhaps the link is actually not in this tangible, physical realm. Perhaps it lies in the spiritual inheritance, passed down from generation to generation, always providing insight and direction.

You have explored the physical setting that was home to the Jewish people for eons.

Now, come join us for a deeper level of exploration, one that truly reveals who we are, and touch the essence of the Jewish people.

Aish.com Your Life Your Judaism
Like What You Read?  Give Jews around the world the chance to experience engaging Jewish wisdom with more articles and videos on Aish. It would make your mother so proud and as a nonprofit organization it's your support that keeps us going. Thanks a ton!

Quarry and Aqueduct
For Every Individual, A Torah Scroll
Allegiance To The Monarch
Meet the Real You: Yom Kippur
Comments
MOST POPULAR IN Seminars