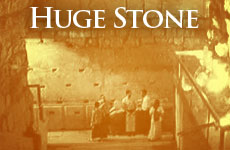 Meet the largest building stone ever used in world history.

You are now standing in front of what many feel is the largest building stone ever used in world history. It's part of a row of stones in the Western Wall known as the Master Course. Click the picture to see the massive scale here.

Some quick stats on the huge stone: 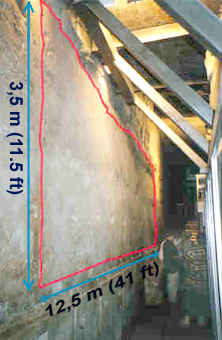 Focus on the massiveness of this huge stone. Over 500 metric tons! What is truly amazing is that today's best cranes can only lift 250 tons.

This means, of course, that we will have to totally re-think our understanding of the technology our ancient brethren had when they built the Temples.

Realize that street level of that time was 20 ft. (6.5 meters) below where your (virtual) feet are now and bedrock is some 33 ft. (10 meters) down. How did they lift the stones of the Master Course into position?

One theory notes that the quarry was to the north of the Temple Mount and at a higher elevation. If so, the builders could have pushed the stone into place using levers and pulley systems available at that time...

Why put such massive stones so high up?

Notice that the stones underneath the Master Course are smaller. The Wall was built without any mortar or cement. The massive stones of the Master Course were used to stabilize the Wall. It was such an effective method that, throughout history, the Wall withstood disastrous earthquakes.

What are the rectangular holes in the giant stone? 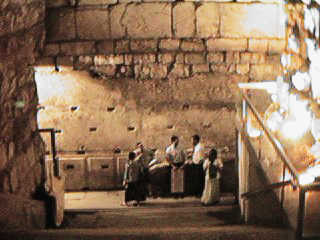 Answer: Upon first discovering these rectangular holes in the Huge Stone, archaeologists were puzzled. Further excavation revealed small slabs of stone protruding from the holes, and their purpose became obvious.

Prior to the 12th century, when this area was used as cisterns, the holes were drilled into the Western Wall. The slabs protruding from the holes acted as stabilizers for the plaster lining of the cistern.

There are those who feel that the thickness of the overlaid material is such that it was part of an actual building, as opposed to simple waterproofing.

Many Jews were understandably upset upon learning that the holy Western Wall of the Temple Mount had been defaced for a building project, but that was standard behavior of each new conqueror.

Note that the Israeli government went to great lengths to respect the needs of those living above the tunnel. The structural integrity of their buildings and basements was maintained through an elaborate system of concrete and steel supports. These supports were cantilevered so none of the steel beams actually touches the Western Wall, out of respect for the sanctity of the Wall.

It is no easy task to cater to the variety of sensitivities of Jerusaams actually touches the Western Wall, out of respect for the sanctity of the Wall.

It is no easy task to cater to the variety of sensitivities of Jerusalem's inhabitants.

Why the smaller stones just above the huge stone? 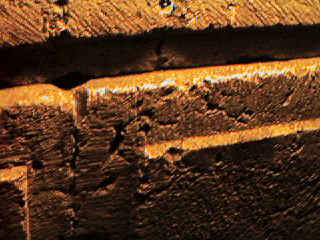 Answer: The fury poured out upon the Temple by the Romans resulted in the destruction of most structures associated with the Temple Mount. Miraculously, the Western Wall, by and large, remained intact - damaged - but intact. Chisel marks found along the top of this stone are mute evidence of the Roman demolition efforts. They came this far - and then they gave up. Their attempts to topple the wall were unsuccessful. This is history. We're standing right where it happened.

When the Arabs built their mosque on the Temple Mount, they found the Western Wall in its damaged condition. Their building projects included restoring the walls of the Temple Mount. The huge stones from the top of the Western Wall were lying literally at their feet, exactly where they had fallen so many centuries before. Like a giant jigsaw puzzle, many of the original stones from the Kotel were put back in their place. Some areas, such as this directly above the Huge Stone, required additional patchwork and smaller stones were added.

The huge stone, and the intact Herodian courses beneath, stand in mute testimony of the Midrash (Oral Tradition) explaining the verse King Solomon wrote in the Song of Songs 2:9 "Behold, He stands behind our wall, behind the Western Wall of the Holy Temple. Why? Because the Holy One, blessed be He, swore that it would never be destroyed."
Shir HaShirim Raba 2:9

Note how the lighting here brings out the classic Herodian stone facing. The inset border around each stone, easily visible on the lower course here, is a trademark of Herod's style. 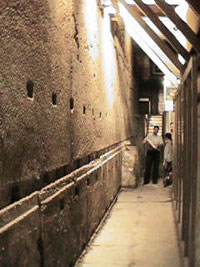 A quick orientation: We are facing the Western Wall of the Temple Mount. The path to our right would leads back to the Kotel Plaza. To the left and north, following the Wall, we will soon arrive at what appears to be a sealed gate into the Temple Mount...