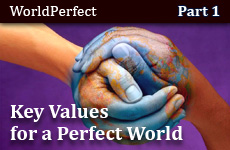 What is the source of our utopian world vision?

Welcome to WorldPerfect, the 12-part online seminar that examines the impact Jewish ideas and ideals have had on civilization.

Many of us have some vague notion of the Jewish influence on civilization, but few of us really appreciate how much the Jewish people have changed the world.

To get started, think about what you consider key values for a perfect world:

Over the years, I’ve asked thousands of people from all walks of life to name the fundamental values necessary to create “the perfect world.” 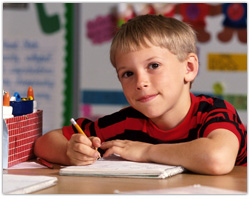 Based upon this survey, six clear categories emerge:

1) Value of Life – People have the right to life, and to live with a certain basic dignity and rights.

2) World Peace – On all levels, communally and globally, people and nations should co-exist in peace and harmony, with mutual respect.

3) Justice and Equality – All people, regardless of race, gender or social status, have the right to be treated equally and fairly in the eyes of the law.

4) Education – Everyone has the right to be functionally literate as a basic tool for personal advancement and the ability to attain knowledge.

5) Family – A strong, stable family structure is necessary for the foundation for society.

6) Social Responsibility – Individually and nationally, we are responsible for each other. This includes responsibility for: disease, poverty and crime, as well as environmental preservation and animal rights.

There is universal agreement that these six values are fundamental to building a perfect world.

Source of Our Values

The question is: What is the source of our utopian world vision?

Let's focus on those civilizations that are largely responsible for laying the foundations of the values and visions of today's world.

As products of modern, liberal, Western democratic societies, what are the civilizations of antiquity which have exerted the most influence on us? Check those you feel have been most influential:

Survey results show that Greece and Rome are the top two entries for being key sources of our values. While numerous other civilizations contributed as well, the majority arguably comes from Greece and Rome, historically considered the most advanced civilizations of antiquity.

Many of our ideas of philosophy and art come from classical Greek thought of over 2,000 years ago. Rome powerfully shaped Western law, government, administration and engineering. 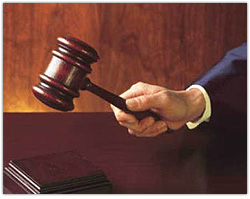 Let’s look at each of these six fundamental values and see what people thought, and even more importantly, how they acted in antiquity and through the ages. Keep in mind that these ideas were generally shared by the other peoples of the Far East, India, China, South and Central Europe, South and Central America, Africa, and the Middle East. Of course, different cultures varied tremendously, but on a basic level, people reacted with pretty much the same philosophy and practicality in all of our six utopian values.

1) Value of Life: Did Greece and Rome think that a human life is of infinite value? The ancients had a shockingly different attitude, practicing infanticide, human sacrifice, and killing for entertainment.

2) World Peace: Peace among the nations is a major element of the ideal world. Yet in the past, greater emphasis was placed on warriors and hero worship.

3) Equal Justice: Regardless of social standing, any person should have access to a fair legal system. The right to vote by all is a cornerstone of democracy. But the ancient world primarily operated on the class-based feudal system.

4) Education: Education of the population is a key aspect to any ideal society. Yet the ancients were more interested in promoting illiteracy as a way to control the masses.

5) Family Values: The family is the core of any society. It not only builds future generations, but imparts societal attitudes toward sex and roles of women. The ancient view of these values was very different than our own.