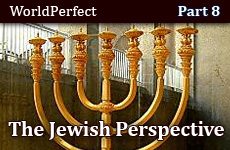 He who saves one life is as if he saves an entire universe.

Let's explore the Jewish perspective on the six fundamental values.

Value of Life – The sanctity of life is one of the most important concepts in the Jewish worldview. This idea is expressed, clearly and simply, in the sixth commandment of the Ten Commandments: "Thou shall not murder" (Exodus 20:13).

World Peace – The idea of humanity living in peace and harmony is a Jewish invention. Peace is a central concept of the Bible, and we see it beautifully described by the prophets. (The word "Shalom" appears in the Bible 240 times!)

Equal Justice – "Justice, Justice you shall pursue" (Deuteronomy 16:20). Jews are obsessed with the concept of equality before the law. The requirement for a judge to be fair and not to take sides is constantly restated throughout the Bible, where the word "tzedek" (justice) – appears 120 times.

Education – The Jewish obsession with education is well known. To take responsibility and affect positive change in the world, a human being must be educated.

Family Values – A strong family is of central importance to Jews. In the areas of sexuality and the relationship between men and women, Judaism has introduced some highly significant innovations.

Social Responsibility – The Jewish people view every person as being responsible for society and the world. This social consciousness goes all the way back to the Bible.

The Jewish people have not always been perfect, nor was everyone else evil. Jews have made plenty of mistakes individually and nationally. However, the Jewish people have always stood for these six fundamental values that comprise our vision of a perfect world. Judaism contributed to humanity a unique moral vision, a blueprint for an ideal world.

Despite horrendous persecutions for centuries, the Jewish people have maintained a level of humanity and caring that exceeded the surrounding civilizations. 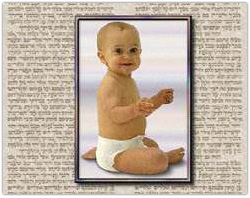 Jewish law prohibits infanticide, human sacrifice, and killing for sport. The Torah tells us that virtually all its commandments should be violated, and no expense or effort spared, in order to save a life.

One of the most beautiful expressions of the value of life is found in the Talmud (Sanhedrin 4:5):

This statement was said almost 2,000 years ago by the Sages of the Talmud, at the same time that the Romans were killing thousands of people for sport.

"The Torah was given to mankind in order to establish peace." (Midrash Tanchuma – Ki Sisa 96:3)

The Torah is called peace, as it states, "Its ways are pleasant ways, and all its paths are peace." (Proverbs 3:17)

"Hillel used to say: 'Be of Aaron's disciples, loving and pursuing peace.' " (Talmud – Ethics of Our Fathers)

"The Master of Peace desires peace of all His creatures." (Sefer Hachinuch 206) 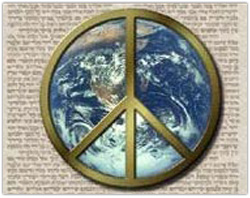 Maimonides (Rambam), who lived 850 years ago, was one of the greatest Jewish scholars of all time. In his seminal work, a codification of Jewish law called Mishneh Torah, Maimonides explains the Torah's view of the ideal state of peace:

The sages and prophets did not long for the Messianic era in order to rule the world, nor to subdue the nations, but to be free to pursue Torah and its wisdom. At that time there will be no hunger and no war, no jealousy and no strife. The entire world will be occupied with acquiring the knowledge of God as it says, “The world will be full of the knowledge of God as the waters cover the sea" (Isaiah 11:9).

A testimony to the Jewish vision of world peace can be found at the headquarters of the modern institution dedicated to world peace: the United Nations. On the outside wall of the General Assembly Headquarters in Manhattan is the motto of the UN, engraved on the "Isaiah Wall":

"And they shall beat their swords into plowshares and their spears into pruning hooks. Nation shall not lift up sword against nation. Neither shall they learn war anymore." (Isaiah 2:4)

The UN recognizes that the utopian vision of peace, brotherhood and harmony is a Jewish invention expressed by Isaiah 2,500 years ago. The Jewish people brought the vision of peace to the world, and we have been longing for it ever since.

Part 7: Social Responsibility
It Takes A Lot Of Faith To Be An Atheist
How Instagram Brought Back This Nostalgic Soup
What Makes Eli Run?
Comments
MOST POPULAR IN Seminars