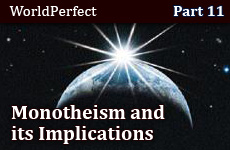 America’s Founding Fathers turned to the Bible for inspiration.

Monotheism is the most revolutionary idea that the Jewish people brought to the world. It is the source of these six values of a perfect world.

Ethical Monotheism, the belief in one God who is the Creator of the Universe, the Father of all humanity, and the source for one absolute standard of morality, is the single greatest contribution to civilization in the history of mankind.

Today the world understands, and more or less believes, the idea of one indivisible God. Historically, this was not always the case. An amazing transformation occurred in human consciousness over the last 3,000 years. 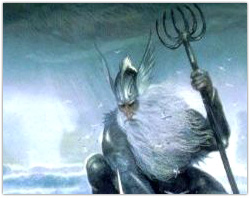 In antiquity, the idea of one indivisible, all-powerful God was incomprehensible. A variety of religions permeated all aspects of existence. All were polytheistic; all believed in multiple gods.

For example, the gods of Greek mythology were physical manifestations of the forces of nature. There were hundreds of them: Poseidon was god of the sea; Zeus, the god of the heavens. Every religion had its own "Pantheon" (array of gods). The Egyptians had 2,000 gods. The Roman historian Varro estimated that in Imperial Rome there more than 30,000 gods. These gods lived forever and possessed supernatural powers, but in all other aspects they were like mortals. They ate, slept, and even shared the same vices: They slept around, lied, cheated, stole and murdered.

Life proved very confusing. There was no single source telling man what to do. If someone wanted to do something, he would simply find a god to support his actions. Man and the gods were trapped in the world together, manipulating one another – through magic, bribes and sacrifices.

The polytheists believed in a concept of right and wrong, but did not adhere to any one standard. Morality was defined by man and subject to alteration to suit one’s whims and social convenience.

Into this polytheistic world, about 3,800 years ago, appeared a man named Abraham who made an amazing intellectual discovery that changed history. Abraham said: Polytheism is just an illusion. There is only one God, who is the Creator of the universe. He is an infinite, Almighty, all-knowing God. What’s more, He is a loving God. He didn't create the world and go on vacation. He is involved constantly with His world and wants us, His children, to have a relationship with Him.

Abraham discovered the concept of God on his own and was committed to living with that reality. This is called Kiddush Hashem, "sanctifying God’s name," making the reality of God the most important thing in the world.

The Shema prayer declares that the most important thing in the world to a Jew is living with the reality of God: "Hear O Israel, the Lord our God, the Lord is One" (Deuteronomy 6:4).

Our list of six key values flows logically from the idea of ethical monotheism. In the beginning of Genesis, God created humanity "in the image of God." Since God has no physical components, what “God-like” feature does every human being possess?

The answer is a soul – a spiritual entity that is completely non-physical. Every human being contains a soul, a divine spark, and therefore every life has infinite value. No matter who you are – from a tiny infant to a 90-year-old invalid – all human possess this infinite, divine spark and are intrinsically valuable and precious. 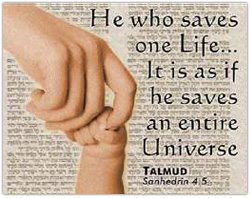 Value of Life – The Talmud teaches that “saving a life is like saving a universe.”

Justice & Equality – Since every human being has a soul, there is a basic equality amongst all. The prophet Malachi said: "Have we not all one Father? Has not one God created us?" (Malachi 2:10)

Social Responsibility – Since every human being has a soul, then we have the obligation to be like God, to emulate the Almighty. The Torah commands: "...and you shall go in God's ways" (Deuteronomy 28:9). The Talmud explains that just as God is kind and merciful, you too should be kind and merciful.

God placed Adam and Eve, the parents of all humanity, in the Garden of Eden and told them: "Here is your garden, now tend to it." Every human being is responsible for the world. It’s our world – go take care of it.

Abraham chose to commit himself to the reality of one God, prepared to make the ultimate sacrifice for it. God responded: "I choose you and your descendants after you" – the Jewish people, forging a covenant with this nation.

What are the "Chosen People" chosen for? They are chosen for responsibility, not for privilege. Chosen for the responsibility to create a moral society that lives with the values that stem from the idea of one God, to create a society that will become a "light unto the nations," a moral beacon to the world. The task is not to force beliefs onto others, nor to convert the rest of the world to Judaism, but to change the world by setting an example. Abraham's mission of perfecting the world makes the Jewish people different, not better.

I will insist the Hebrews have [contributed] more to civilize men than any other nation. If I was an atheist and believed in blind eternal fate, I should still believe that fate had ordained the Jews to be the most essential instrument for civilizing the nations... They are the most glorious nation that ever inhabited this Earth. The Romans and their empire were but a bubble in comparison to the Jews. They have given religion to three-quarters of the globe and have influenced the affairs of mankind more and more happily than any other nation, ancient or modern. (John Adams, letter to F. A. Van der Kemp, 1808, Pennsylvania Historical Society)

It's no wonder Jewish ideas have changed the world. The Jewish national mission for over 3,000 years has been as a “Light Unto the Nations." 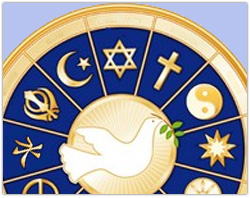 For millennia the Jews stood alone with these beliefs. How is it that this little people, 0.2 % of the world's population, the most hated people in human history, succeeded in getting the world to accept their ethical vision?

Paul Johnson, in A History of the Jews, gives part of the answer: "...the result was monotheism and the three great religions which profess it."

The Jews have professed monotheism for almost 4,000 years. This was later adopted by Christianity and Islam, which have converted hundreds of millions of people from amoral polytheism to monotheism, introducing the basic tenets of Judaism to the majority of humanity.

Jewish values have further spread through the growth of liberal democracy over the last 200 years. The shapers of British democracy and the Founding Fathers of America constantly turned to the Bible as a source of inspiration and values. The U.S. Declaration of Independence states:

We hold these truths to be self-evident, that all men are created equal, that they are endowed by their Creator with certain unalienable rights, that amongst these are life, liberty, and the pursuit of happiness.

The basis for democratic government, basic rights and values, is the concept of One God. What a dramatic revolution in human history!

Part 10: Jewish Family & Responsibility
Bechukotai 5782: Divine Retribution
Behar 5782: Working to Live or Living to Work?
The Wholeness of Being Broken
Comments
MOST POPULAR IN WorldPerfect