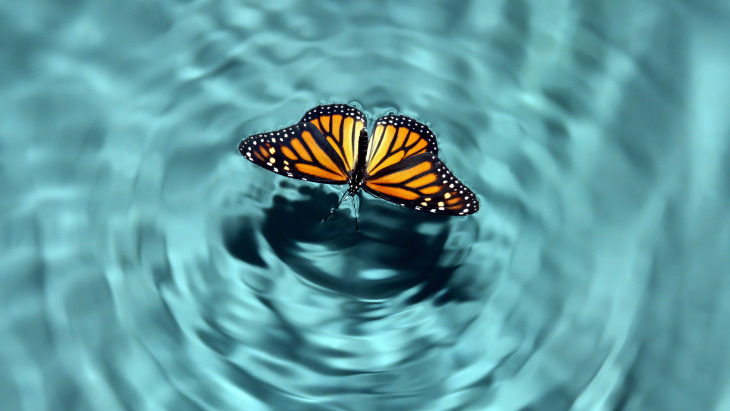 The camera is always on. You never know which small deed you do that can have cosmic implications.

In 2007, an employee of a New Jersey Dunkin Donuts named Dustin Hoffmann (not that one) made news when the store was nearly robbed by a serial robber who jumped on the counter grabbing the cash out of the cashiers’ register. The 20-something Hoffmann fought back. Grabbing the man’s arm with one hand and a large coffee mug with another, he quickly and repeatedly smashed the crook’s head with the mug and successfully thwarted the crime.

When later asked about the incident, Hoffmann said that what galvanized him into action was YouTube: “What was going through my mind at that point,” he said, “was that the security tape is either going to show me run away and hide in the office, or whack this guy in the head, so I just grabbed the cup and clocked the guy pretty hard! There are only a few videos like that on YouTube now, so mine’s going to be the best. That’ll teach this guy!”

We traditionally assume that we read The Book of Ruth on Shavuot because the story of Ruth describes the paradigmatic convert. Ruth made the choice to join the Jewish people and to forge her destiny with ours. She is the model of “opting in” and on the holiday in which we commemorate the mass conversion of our nation at Mount Sinai, her story inspires us to embrace our Torah, our tradition and our heritage with great enthusiasm, zeal, and fervor.

Without rejecting that reason, I would like to suggest another one. The Midrash (Ruth Rabbah 5) says:

Had he only known that the mic is on and the camera is rolling. Had he only realized that this clip of his life would be shown on YouTube they would have done so much more.

Does the Midrash mean to suggest that these great individuals would have acted differently if they knew the cameras were on them? Are we meant to understand that these most humble, righteous individuals were driven by their egos such that their conduct would have been altered by the knowledge that their actions would be publicized? How could this be?

Explains Rabbi Yaakov Kamenetsky, the Midrash doesn’t mean to imply that that PR would have changed their behavior. It wasn’t ego that was the problem. It was the opposite, their extreme humility. These great men thought of themselves as small, insignificant personalities on the great world stage. They saw their behaviors as small acts of kindness, no big deal. They failed to recognize the cosmic impact and large influence our small deeds can have.

If Reuven had indeed brought Yosef back to his father, the entire servitude and exile could have been avoided altogether. When Aaron and Moses met, the greatest redemption in history was beginning to unfold and Moses was on perhaps the most important and significant mission any individual has ever undertaken in Jewish history.

Boaz thought he was giving a little tzedaka, sharing a small amount of food. Little did he know that his interaction with Ruth was the beginning of a relationship that would yield the Davidic dynasty and ultimately that will bring the Messiah.

Indeed, Ruth and Boaz were truly a match made in Heaven. Ruth in her soft-spoken manner did what she thought was a small act of kindness. She refused to leave her mother-in-law alone and pledged to accompany her. Boaz, rather than looking the other way, embraced the chance at sharing the produce of his field. Together, these two individuals who saw themselves and their actions as pedestrian and inconsequential altered all of human destiny by planting the seeds for redemption. Indeed, the Midrash notes how God Himself took notice of their humility and declared, “Boaz did his, and Ruth did hers, so too will I do Mine!"

Our actions have cosmic implications. The small acts of kindness we engage in can make the biggest difference not only to ourselves, but to all of humanity. As the chaos theory's “butterfly effect” attests, small acts can have large outcomes. Chaos theory is applied in mathematics, microbiology, computer science, economics, engineering, finance, just to name a few.

Boaz and Ruth each did one act that changed the world, and so can we.

Chief Rabbi Jonathan Sacks has applied chaos theory in one more realm. In his book “To Heal a Fractured World,” he coined the phrase “chaos theory of virtue,” demonstrating how small acts of kindness can have immeasurable consequences on the world.

Boaz and Ruth each did one act that changed the world, and so can we. Who knows what opportunity we will be presented with or what chance we will encounter that can literally change the world. The Midrash has one last line and I believe it contains the reason we read Ruth on Shavuot:

In earlier times when man would do a mitzvah, the prophets would record it, now that there are no prophets, who records the mitzvot of man? Eliyahu and the Messiah; and God stamps it. (Vayikra Rabbah Behar 34)

On the day that we celebrate the giving of the Torah, Ruth reminds us that the Torah is not yet complete. It is a work in progress because we continue to write it through our actions. There is a Book of Ruth and a Scroll of Esther and new stories being written every day that record our small acts and the ways they have changed the world, even without our knowing.

We can become the heroes of tomorrow about whom the next book is written through our small acts of kindness. The camera is always on. You never know which small deed you do that can have cosmic implications.