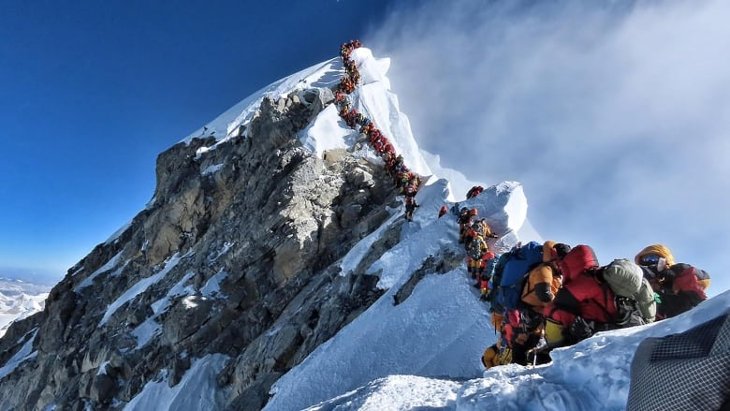 It is not the mountain that we conquer but it is ourselves.

The holiday of Shavuot is different than any other on the Hebrew calendar.

Shavuot, commemorating the date on which we received the Torah, is the only festival preceded by a lengthy count down. For 49 days we take note of how far we have already come to reenacting the most momentous event of our history. Just as for our ancestors of old, the journey from Passover to Mount Sinai takes seven weeks of seven days, the holy number of seven representing sanctity squared.

And the significance of that count has a fascinating contemporary parallel.

Newspaper accounts in the past few weeks record the remarkable phenomenon of thousands of adventurers from around the globe taking part in the grueling attempt to scale the top of Mount Everest, highest mountain in the world. While once a feat achieved by only the heartiest and rarest few, the top of Everest’s tip has now been described as being “like a zoo.” Climbers push and shove each other to take selfies. People by the dozens wait hours in line – with temperatures where even an extra hour or two can mean the difference between life or death – to reach the summit. And indeed, for the unlucky ones, this has been one of the deadliest climbing seasons on Everest with at least 10 deaths.

Yet the dedicated thrill seekers remain undeterred. “I was not prepared to see sick climbers being dragged down the mountain by Sherpas or the surreal experience of finding dead bodies,” one of the successful conquerors of Everest was quoted as reminiscing. But all the difficulties were, in retrospect, insignificant. He had read about explorers as a boy and said he had always “wanted to get to the one spot where you can stand higher than any place else on earth.”

What is it about climbing mountains that can inspire such devotion?

Mountain tops are geographic locations. In a more profound sense they are visual representations of life’s ongoing trials. Even children are able to grasp this in the words of the simple wisdom of Dr. Seuss: “Today is your day, your mountain is waiting. So get on your way.” And who is not familiar with the way Martin Luther King put it, in his most famous sermon delivered shortly before his death:

Well, I don't know what will happen now. We've got some difficult days ahead. But it doesn't matter with me now. Because I've been to the mountaintop. And I don't mind. Like anybody, I would like to live a long life. Longevity has its place. But I'm not concerned about that now. I just want to do God's will. And He's allowed me to go up to the mountain. And I've looked over. And I've seen the promised land. I may not get there with you. But I want you to know tonight, that we, as a people, will get to the promised land. And I'm happy, tonight. I'm not worried about anything. I'm not fearing any man. Mine eyes have seen the glory of the coming of the Lord.

King almost certainly was referencing the line in the book of Psalms with its allusion to the mountaintop: “Who may ascend the mountain of the Lord? Who may stand in his Holy Place?” (Psalms 24:3).

Climbing mountains as a symbol for scaling the heights of spirituality is an ancient biblical idea. Commentators offer beautiful insights into the comparison’s deeper meaning.

Of course God could have given us the Torah in a valley. But the spot He chose was Mount Sinai. Why not Mount Everest? Perhaps God also wanted to reassure us that the climb is not really that difficult.

And for the Jewish people who continue to rule their lives by the revelation on Mount Sinai we know of a certainty that the truths of Torah taught on that spot allow us “to stand higher than any place else on earth.”

Up All Night
The Promise Of The Land
Which Chat Are You On?: Parshas Behar/Lag Ba’Omer
Do You Like Slow-Cooked Food? Thank the Jews
Comments
MOST POPULAR IN Society
Our privacy policy