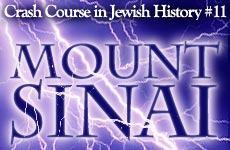 The encounter between God and the Jews at Mount Sinai was a totally event in all of human history.

Passover is often described as the holiday of freedom. And in liberal democracies freedom is often misunderstood as the ability to do whatever you like with no oppressive authority telling you what to do. But that is not how the Bible and Judaism define freedom.

The Jewish idea of freedom is best summarized by that very famous expression -- "Praise the servants of God who are not servants of Pharaoh." 1That is, freedom is seen a means to an end, not an end in and of itself-True freedom means to be free of outside influences and pressures so that we can be free to pursue ultimate meaning-relationship with God. 2 In the specific context of the Exodus story it means being free from an oppressive authority in order to stand at Mount Sinai and commit to a certain responsibility.

What happened at Mount Sinai?

To answer quite simply, the Jewish people -- every man, woman and child -- had an encounter with God.

It was a totally event in all of human history. The Bible itself states in Deuteronomy 4:33 that this never happened any place else. You can check all history books; you'll never find a similar story of God speaking to an entire people.

All other claims about revelation in human history are based on the experience of one individual or at best a small group of initiates. For example, Islam is founded on the teachings of Mohammed who said that God spoke to him in a cave and revealed the teachings contained in the Koran to him.

The notion of an entire people having an encounter with God is to Judaism. And it's the one claim that cannot be faked. So for example, I can claim that I had a vision last night and God spoke to me, and if I'm charismatic enough and you are gullible enough you might believe I am a prophet. But I can't convince you that you saw something that you know you didn't see.

Jews say that we have kept the Torah for thousands of years, not because of miracles or any other supernatural phenomena of Jewish history, but because we all stood at Mount Sinai and heard God speak and for generation after generation that very fact was passed down. 3 The great Medieval Jewish scholar Maimonides summed it up perfectly when he wrote:

The Jewish people did not believe in Moses our teacher because of the miracles he performed. If one believes in something because of miracles, he may suspect that they were performed through sleight of hand or sorcery...We believe in Moshe because of what happened at Mount Sinai. Our own eyes saw, not a stranger's, our own ears heard, and not another's...The revelation at Sinai is the only real proof that Moses' prophecy was true and above suspicion...(Yad, Yesodei HaTorah 8:1.)

The story of the survival of the Jewish people is going to be to a large extent the story of what's called shalshelet hakabala -- the transmission process of Torah from one generation to the next.

A NATION IS BORN

Well, consider how the French became "the French." Did they all wake up one morning to collectively decide they liked white wine and blue cheese and they were going to speak French? No. It was a long process. As with every other nation, this process involved a people living in a specific geographic area for an extended period of time and evolving a common language and a common culture born of a shared historical experience. Eventually, this people developed a political entity and government (with a king at its head) and they defined their boundaries, flew a flag, minted coins and called themselves France.

For Jews the process of becoming a nation started outside their national homeland -- in fact while in bondage and under the most adverse conditions designed to erase any cultural or historical identity. Jews did not become a nation by pledging allegiance to the State of Israel. A scraggly band of escaped slaves became a nation standing at the foot of Mount Sinai and saying to God: "We will do and we will listen" -- that is, pledging to fulfill the commandments of the Torah and with time to understand the mission that came with it.

Just as Abraham said, many, many generations earlier, "I choose to live, and if necessary to die, for the reality of God," so too these descendants of Abraham made the same commitment.

That's how the Jews became the Nation of Israel.

This is why we say that Judaism is not just a religion -- it's a national identity. Being a Jew is not the same as being a Christian. Christianity is purely a religious belief. You could be British, American, French and still be a Christian.

Not so the Jews.

The Jews can certainly become citizens of the countries in which they live and they often look and act like everyone else, but all the while, they and everyone else knows they are different. If they choose to deny this fact, the rest of the world will always remind them of it.

Most importantly, Jews have a specific relationship with God which is not just a religious/spiritual identity; it's an all-encompassing view of the world -- how to live every second of life -- which is in the world.

The Jewish national identity was forged by the experience at Mount Sinai where we committed to a mission, and a specific way of life to be lived in accordance with the commandments of the Torah, which is the guidebook for accomplishing that mission on a personal and national level. 4

After the original revelation, Moses spent 40 days listening to God talking to him, dictating to him the 613 commandments of the Torah (which are encapsulated in Ten Statements, the so-called "Ten Commandments") and also the principles how to apply these commandments (which are referred to as the Oral Law). 5

Note that the Oral Law was given first. And the Oral Law has been exclusively in the domain of the Jews. The Christians adopted the Written Law -- the Torah and other parts of the Hebrew Bible as part of their scriptures -- but the Oral Law stayed ly Jewish. Because it is the Oral Law that tells us how to live as Jews.

It cannot emphasize strongly enough how significant the Oral Law is. One can't live as a Jew without it. It's going to become a very important issue when we look at splinter sects in Judaism later on in Jewish history.

The Written Law was written over a period of 40 years while the Jews wandered in the desert and God was dictating to Moses. There's a lot of material in the Bible that's explaining what happens later on in their wanderings, so obviously this wasn't given in advance at Mount Sinai or there'd be no free will. 6

Although the Torah -- Genesis, Exodus, Leviticus, Numbers and Deuteronomy -- are called the Five Books of Moses, Moses was not the author. Moses was the scribe -- the ultimate scribe. God dictated to Moses.

But it's very clear, and the Bible says over and over again, that Moses was among all prophets.

And there arose no prophet in Israel like Moses whom the Lord knew face to face.(Deut. 34:10)

Prophecy is a process whereby God communicates directly with man. Prophecy is not something that just happens to someone. To achieve prophecy means that a person is able to perfect himself and transcend to a higher level of spiritual reality, and of course, what that level is depends on the prophet's direct experience of the infinite. Most prophets would be asleep or in a trance when God would communicate with them via a vision and would later put that vision into words. Moses' prophecy was in that God spoke to him while awake and fully conscious. He "heard" God directly. 7

And the Torah is considered a direct dictation, which is why the Five Book of Moses have a position among all holy books of the Jewish people and a authority in the Jewish world.

Having learned the Oral Law and with the Ten Commandments in hand, Moses came down the mountain and what he saw shocked him to such an extent that he dropped the stone tablets. Below the mountain, where just a few weeks ago, they stood in an encounter with God, the Jews were worshiping an idol in direct violation of the law they had just been given.

History Crash Course #59: The Face of Anti-Semitism
Extras In Our Own Epic
Evolution 2.0: The Coming Darwinian Revolution
Chukat 5782: Let’s Play the Blame Game!
Comments
MOST POPULAR IN History
Our privacy policy