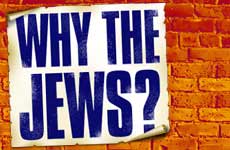 Understanding the root of the world's longest hatred.

Prejudice, it seems, is a standard fare of life. In his folksong entitled "National Brotherhood Week," Tom Lehrer sings:

In this song, Lehrer expresses the truism that hatred for the Jew is uniquely commonplace. The Crusades, Spanish Inquisition, blood libels, pogroms, countless expulsions and the systematic murder of 6 million.

The question is: Why? What lies behind these millennium of hatred? Why has the undercurrent of anti-Semitism bubbled and boiled and exploded against Jews everywhere, time and again throughout history?

In this 8-part seminar, we will examine the root reason for the world's longest hatred.

Causes versus Excuses – How Can We Tell the Difference?

When we study any theory, it is important to distinguish between a "cause" and an "excuse." The difference is not difficult to recognize:

If his parents would buy him a watch and he would still be late for school, then it is clear that the lack of a watch was just an excuse for his lateness, not its cause.

Concerning anti-Semitism, if we succeed in identifying the reason for anti-Semitism, then eliminating that should put an end to hatred for the Jews. However, if we can eliminate it and the hatred remains, then we know that what we thought was a cause is actually an excuse.

The Six Common Reasons for anti-Semitism

Keep this distinction in mind as we explore the six most frequently offered reasons for anti-Semitism. As we touch upon each of these explanations, we will try to ascertain whether it is the cause of the hatred, or merely an excuse.

Historians and sociologists have come up with numerous theories to explain anti-Semitism. We will examine these one by one, and discuss the validity of each.

Let us examine these six frequently-given reasons and determine if they are truly causes or excuses.

The Economic Theory of Anti-Semitism

The Economic Theory of Anti-Semitism postulates that Jewish wealth and power arouses the envy of other groups, and this in turn leads to great resentment.

This theory has surfaced in different guises throughout history. One of the ways it became popularized was through The Protocols of the Elders of Zion, the minutes of fictional “secret meetings” in which Jewish leaders conspire to rule the world. Protocols is a viciously anti-Semitic book created by the Russian secret police.

This fictional account has provided an excellent excuse for campaigns of persecution against Jews, influenced the masses to believe the myth that Jews control governments. It is the second most widely published book in history.

Do people today still believe that Jews have some mysterious financial and organizational advantage over the rest of humanity?

A Jewish physicist who works for Exxon Corporation spent many months working on a project in coordination with a world-renowned scientist from China. The two men developed a good working relationship and became friendly with one another.

One day the Chinese scientist commented to the Jew, "You know, ever since we first met I've been meaning to ask you a question: Why did you become a physicist? Why didn't you just go into business?"

"What kind of question is that?" the Jewish scientist replied. "I became a physicist because I wanted to be a physicist!"

"But aren't you Jewish?" the Chinese man persisted.

"So what difference does that make?"

"Well," the Chinese scientist patiently explained, "there would be countless risks involved if I would go into business, but for you it's risk-free!"

"Forgive me, but I'm not following you," said the Jew. "What sort of business is risk-free?"

"For you – any business! Come on," he said with a conspirational wink, "we all know you have the Organization behind you."

"Huh? What 'organization' are you talking about?"

"Come on, everybody knows that all Jewish men get money from the Organization when they get married. That's how all the Jews get started in business. There's no risk involved, because if the business fails, the Organization buys out the debt and then funnels more start-up money to the Jew. This goes on until the fellow hits upon a business that prospers!"

No such fantastically endowed international organization exists. Yet the assumption of this world-class scientist demonstrates that the myth of Jewish access to unlimited wealth is alive and well today.

First, consider universal attitudes toward the rich. We don’t see any sustained historical persecution against wealthy non-Jews. Thus, if the haters decide to single out wealthy Jews and ignore wealthy non-Jews, economics cannot be regarded as the cause for hatred.

Second, if we remove the element of wealth and power from the Jews, does the anti-Semitism vanish?

The Jews who lived in the shtetels of Poland and Russia during the 17th-20th centuries were poor and powerless, utterly lacking any form of influence whatsoever. Yet they were hated. Often they were persecuted and subjected to unspeakable torments. On many occasions entire villages were ransacked and their Jewish inhabitants massacred in cold blood. Under those circumstances, anti-Semitism did not distinguish between rich and poor, between strong and weak, between powerful and powerless.

Likewise, anti-Semites in the Middle Ages initiated countless pogroms against Jews (without first investigating their bank accounts or investment portfolios).

When the Nazis liquidated the Warsaw Ghetto, there were no Jewish businesses to destroy. In fact, the impoverished conditions there were appalling. The Jews in the ghetto could not have been thought of as "rich" by anyone’s standards, and yet the Nazis felt they had to be eliminated.

Poor Jews have always been hated equally as rich Jews. When a Jew meets with financial success, it may set the anti-Semite’s teeth on edge, but the Jew’s success is clearly not what created the anti-Semite. Money therefore cannot be the cause of anti-Semitism.

How about power? Can it be the cause of anti-Semitism?

If someone who is rich and powerful comes to you for a favor, would you persecute him? No, you help him – having such a person indebted to you is a great insurance policy. Case in point is the Arab oil-producing countries who are widely appeased, despite their standards that often fly in the face of Western values.

There was one nation that did treat the Jews as if they were powerful and rich. The Japanese never had much exposure to Jews, and knew very little about them. In 1919 Japan fought alongside the anti-Semitic White Russians against the Communists. At that time the White Russians introduced the Japanese to the book, The Protocols of the Elders of Zion.

The Japanese studied the book and, according to all accounts, naively believed its propaganda. Their reaction was immediate and forceful – they formulated a plan to encourage Jewish settlement and investment into Manchuria. The Japanese decided that these wealthy and powerful Jews are precisely the people with whom they want to do business!

The Japanese called their plan for Jewish settlement "The Fugu Plan." The "fugu" is a highly poisonous blowfish. After the toxin-containing organs are painstakingly removed, it is used as a food in Japan, and is considered an exquisite delicacy. If it is not prepared carefully, however, its poison can be deadly.

The Japanese saw the Jews as a nation with highly valuable potential, but, as with the fugu, in order to take advantage of that potential, they had to be extremely careful. Otherwise, the Japanese thought, the plan would backfire and the Jews would annihilate Japan with their awesome power.

Duuring World War II, the Japanese were allies of the Nazis, yet they allowed thousands of European refugees – including the entire Mir Yeshivah – to enter Shanghai and Kobe during the war. They welcomed these Jews into their country, not because they bore any great love for the Jews, but because they believed that Jews had access to enormous resources and power which could greatly benefit Japan. (This is all detailed in the book, The Fugu Plan, by Marvin Tokayer.)

If anti-Semites truly believe that Jews rule the world, then why don’t they relate to the Jews like the Japanese did?

The fact that Jews are generally treated as outcasts proves that people do not really believe that Jews are as wealthy or powerful as claimed. In other words, the anti-Semites do not take their own propaganda seriously.

Whatever Happened to Jewish Power?

If there is any truth to the notion that Jews control governments, why couldn’t those powerful Jews convince any country to accept the refugees who were struggling to escape the European inferno during the Holocaust? If "World Jewry" is so powerful and wields such political influence, surely at least one government would have agreed to take them in as refugees and allowed them to stay until the end of the war...

The film Voyage of the Damned dramatically demonstrates how government buried its head in the sand while the wholesale slaughter of Jews went unchecked. As such, the claim that Jews control governments rings painfully absurd.

In this same vein, many people say that anti-Semitism has been caused by the fact that Jews were money-lenders in many societies and supposedly extracted their "pound of flesh" from their non-Jewish compatriots.

In fact, just the opposite is true. Jews were forced to become moneylenders precisely because of the severe employment limitations which anti-Semitic trends imposed on them. Anti-Semitic laws made it impossible for Jews to own land, to attend universities or to enter any common occupations. Money was the only commodity in which they were allowed to deal, so lacking any other option, they became money-lenders.

Obviously, the economic reason for anti-Semitism is really an excuse.

ness of the Holocaust

The Six Million Kedoshim
It Takes A Lot Of Faith To Be An Atheist
How Instagram Brought Back This Nostalgic Soup
What Makes Eli Run?
Comments
MOST POPULAR IN Holocaust Studies
Our privacy policy