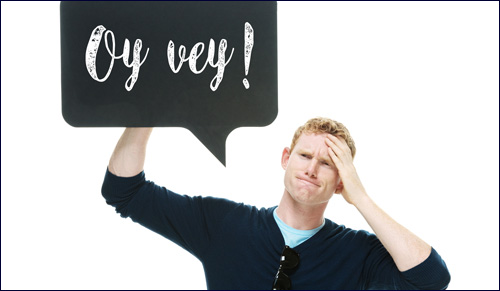 How many of us know the origins and exact meaning of these common Jewish phrases?

These days, we might exclaim “Oy!” when something doesn’t go our way. Little do we realize, we’re echoing a word that’s thousands of years old that is found in the Tanach.

“Oy” means “woe”, and it’s used to describe the horror that people and nations feel when threatened by their enemies. (See Samuel 4:7 and Isaiah 3:11)

“Vey” means woe in Aramaic, the language of the Talmud. (See Dictionary of the Targum, Talmud Bavli, Talmud Yerushalmi and Midrashic Literature by Marcus Jastrow, 1971 and 2004.)

“Mazel tov” is a quintessential Jewish expression; we wish Mazel Tov when someone gets engaged, at weddings, and to kids at their bar mitzvahs. It’s often translated as the Jewish “congratulations,” but the actual meaning of “Mazel Tov” is much deeper. “Mazel” is variously translated as luck, or a sign (the signs of the Zodiac in Hebrew area also called “mazalot”), and it denotes something coming down to us from above. (“Tov” means good.)

But the fate of the Jewish people is not limited by “mazel.” The Talmud teaches that we each have the power to transcend our external circumstances and shape our own destiny if we try. The Talmud discusses the example of Rabbi Akiva’s daughter who was destined, according to astrologers, to die on her wedding day. Instead, she gave food to a poor beggar at her wedding. As she did so, she inadvertently killed a scorpion that was mean to bite her and changed her own destiny” (Shabbat 156a).

By wishing “Mazel Tov”, we’re wishing others the chance to grow, to rise above their own situations, and to create a “mazel tov”, a good situation, for themselves.

Many cultures have traditional toasts over wine and other drinks; “L’Chaim,” the Jewish toast, is arguably the oldest. “L’Chaim” means “To Life!” and it is a shortened form of a toast that Rabbi Akiva, the great First Century sage, made. At his son’s wedding, Rabbi Akiva toasted “Wine, and to Life to the mouths of the rabbis and the mouths of their students!” over every single cup of wine (Shabbat 67b).

Rabbi Akiva’s toast reflects a deep truth about wine: it can be used both for good and for bad. The Talmud cautions that “wine goes in and secrets come out” (Eruvin 65). The way we handle wine can elevate us or, God forbid, it can degrade us. Repeating Rabbi Akiva’s famous toast reminds us to be cautious in our use of wine, using it for good and “for Life!” only.

Jewish spiritual leadership was traditionally passed down from teacher to student: Moses, who received the Torah on Mount Sinai, taught his disciple Joshua, who taught it to the leaders of the Jewish people who came after him, etc. This method of direct transfer of knowledge and authority continued unabated in the land of Israel for thousands of years; in the early years, Jewish sages didn’t go by the title Rabbi.

It wasn’t until relatively recently, in the first century of the Common Era, that he terms “Rabbi” and “Rabban” were used. Both words are related to the Hebrew word "rav" which means numerous or great, a reference to the copious knowledge of those who  led Jewish courts and academies.  “Rabban” referred to the head of the Sanhedrin, or Jewish court, and the first sages to be called “rabbi” were the disciples of Rabban Yochanan Ben Zakai. For hundreds of years, “rabbi” referred to Jewish leaders who were ordained in the Land of Israel. (Jewish sages in exile in Babylonia used the related title of “Rav” instead.) The Roman Empire banned the practice of ordaining rabbis in Israel, however, and though many sages resisted, it became more and more difficult to maintain the original, unbroken line of teacher-student ordination.

The term “rabbi” became popular in Medieval Europe, applied to learned teachers who led communities. (Sadly, these rabbis could no longer enjoy the chain of unbroken ordination that went back to Moses.) Today, a rabbi today means that one is qualified to rule on Jewish law, answering questions and transmitting knowledge to a new generation of Jews.

Considered to be an offensive term (and consequently avoided) by many today, the word “goy” literally means a nation. (The plural is “goyim”, or nations.)

The Torah contains several examples of Israel being called a goy, or nation: Abraham is promised that Israel will become a “goy gadol”, or a great nation (Genesis 12:2); Moses is told that the Jewish people will become a “goy kadosh”, a holy people. The prophet Isaiah foresaw a day when “nation shall not lift up sword against nation”: lo yisa goy el goy cherev (Isaiah 2:4). This stirring image is engraved into the wall of the United Nations headquarters.

The common custom of saying “bless you” (or gezundheit) when someone sneezes has surprising Jewish origins. (“Gezundheit” is “health” in German. In Hebrew, people say labriut: “to health!” after hearing someone sneeze.)

The Torah records that before he passed away, the patriarch Jacob became sick. Jacob was the first person to be described as falling ill before dying in the Torah. The Midrash posits that he was the first person ever to become sick before death; before Jacob, people would simply sneeze and then pass away.

The idea that sneezing was associated with death wasn’t so far-fetched. When God created Adam, God formed Adam’s body out of dust, and then “breathed into his nostrils the breath of life” (Genesis 2:7). Later on, before the advent of modern medicine, sneezing could indicate illness, which could have grave consequences.

Rashi, the great 12th Century Jewish sage who lived in Troyes, France, advised us to wish sneezers good health, suggesting we say “asuta”, which is Aramaic for “may you be healed” to one who sneezes.

This quintessential Jewish greeting has many meanings: hello, goodbye and peace. “Shalom” is derived from the Hebrew root shalem, or complete. Shalom denotes completeness, a state of being whole.

In modern Hebrew, when we ask how someone is we ask ma shlomcha (for a male) or ma shlomech (for a female). A literal translation would be asking “how is your shalom?” Are you whole, or are you lacking in some way? We each have it within our power to appreciate our blessings and recognize all we have to be thankful for. That sense of completeness leads to an absence of want and resentment. It sets the stage for true “shalom,” a feeling of being whole and at peace.

Arson at the Delaware Chabad House

There’s No Hebrew Word For Race

Can Jews be Antisemitic?
Why Are The Prayers Of Yom Kipur So Repetetive?
Ha'azinu 5783: A Time for Unity!
Twisted Thinking
Comments