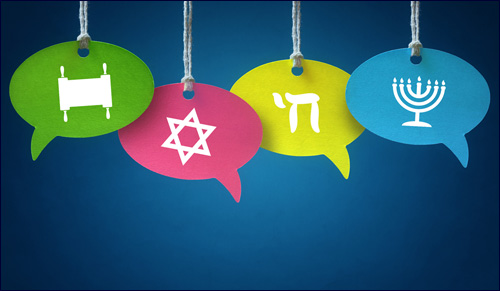 You’ll never see these expressions in quite the same way again.

The origins of many common sayings are often lost on us. Here are the origins of six common adages that have surprising Jewish links. You’ll never see these expressions in quite the same way again!

“The writing’s on the wall.”

This expression, meaning one’s fate is clearly seen, comes from the Book of Daniel in the Tanach. King Belshazzar of Babylonia made an enormous banquet to celebrate the 70th anniversary of Babylonia’s conquest of the Jewish Kingdom of Judah. He ordered his servants to bring out the gold vessels that were looted from the Jewish Temple in Jerusalem, and King Belshazzar and his concubines drank toasts to idols from these holy cups.

Just then, a hand miraculously appeared and wrote the following words on the palace wall: Menei menei tekel ufarsin (Daniel 5:25).

Everyone at the feast stared, horror struck, at the wall. The king could not fathom the message’s meaning, nor could anyone at the party. The Queen entered the hall and told her husband to calm himself. She told him that Daniel, a wise and holy Jewish servant of Belshazzar could surely decipher its meaning.

Daniel swiftly came and read the dreaded missive. “Menei” means “counted” and Daniel explained that God had counted the years of Belshazzar’s kingship and found it was at an end.

Ever since, saying “read the writing on the wall” alludes to that fateful night, and implies that our fate has already been spelled out by circumstances and our actions.

Several theories about this term, meaning “beyond that which is acceptable or even possible to imagine”, have been put forward. One of the most plausible is that it refers to the Pale of Settlement restricting Russian Jews from settling in large swathes of the Russian Empire from the 1400s until the Russian Revolution in 1917.

Jews were restricted from living or working in much of Russia from the late 1400s. When Russia took over Polish territory in 1772, Russia was confronted for the first time with large Jewish populations living its land. Certain areas were set aside for Jewish residence, notably Poland and Russia’s territories on the Black Sea. Central Russia was largely off-limits to Jews, though individual Jewish families could receive special permission to live in areas outside of the Pale. Czar Nicholas I, who reigned 1825-1855, formally coined the term “Pale of Settlement”, delineating those territories where Jews could freely live and work. For a Jew to contemplate living outside those areas was unthinkable: literally, “beyond the Pale”.

To be “blue-blooded” is to be aristocratic. The expression comes from Spain, which for centuries, until 1492, was home not only to European Christians but also to Jews and Muslim Moors. The Spanish ruling class held themselves too high-up and pure to intermarry with Jews or Moors, but some mingling must have occurred, for it became a mark of prestige to boast about having such a light complexion that one’s blue veins could be seen through one’s skin. (Having blue veins visible was considered a mark of aristocracy in general, as seen in paintings of noblemen and women at the time.)

To have sangre azul, or “blue blood” thus meant boasting of a family lineage that was free from any suggestion of intermarriage with Spanish Jews or Moors.

The first recorded use of this modern-sounding expression of aggression is from the 1950 Broadway musical Guys and Dolls, about gangsters and fast times in 1920s New York. The composer and lyricist was Frank Loesser, who was Jewish, and it seems he slipped some Yiddish into the original Broadway version.

The song Sue Me became a hit – without the Yiddish word nu – and the phrase “So sue me!” entered the English language.

To request a “pound of flesh” means to demand something one is entitled to – but which is nonetheless brutal or inhuman to want. This unpleasant expression dates from Shakespeare’s anti-Semitic play The Merchant of Venice, written in the 1590s.

The play tells the story of a Jewish moneylender named Shylock who lends funds to a handsome young man named Antonio – and then cruelly demands an unusual deposit: if Antonio cannot repay his debt, Shylock will be entitled to a pound of Antonio’s flesh instead. Even when offered twice his original loan, Shylock dementedly demands his pound of flesh. It’s only when he’s outsmarted by a clever Christian woman that Shylock gives up his demand. The Merchant of Venice enshrined horrible anti-Jewish stereotypes in English literature for generations and gave us this expression, still in use today.

To be in “seventh heaven” is to be blissfully happy. This expression reflects the Talmud’s explanation that there are seven Heavens representing different aspects of creation (Talmud Chagigah).

The Don’t Text and Drive Campaign