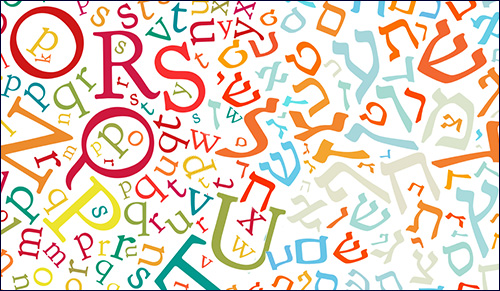 These common English words have their origins in Hebrew and Jewish thought.

You might know more Hebrew than you think. Check out these surprising Hebrew and Jewish origins of common English words. You might never think about these common terms the same again.

Ruthless – In the Torah, Ruth was the epitome of kindness and giving: a Moabite princess, she gave up her wealth and position to take care of her mother-in-law Naomi. Ruth was eventually rewarded for her great kindness by becoming the spiritual mother of the Jewish people, the great-grandmother of King David. To be “Ruth”–less is to lack the kindness and compassion that characterized Ruth; in modern English it denotes being venal and selfish.

Copacetic – this English word means that everything’s in order, that all is as it should be. It’s similar to (and some think derived from) the common Hebrew phrase kol beseder: everything’s okay.

Leviathan – This English word meaning a great sea creature is directly taken from the Hebrew word for whale: leviaton.

Abracadabra – Acknowledging that God is the sole Creator of the world is a central value in Judaism. Thus, it’s forbidden to declare that we, ourselves, are responsible for creation. Or to put it another way, in Aramaic, the language of the Talmud, it’s forbidden to say A’bra (I will create) K’dabra (As I speak).

Cabal – Denoting a secretive group of people, usually intent on an evil purpose, the English word cabal is anti-Semitic in origin: it’s taken from the word Kabbalah, or Jewish mysticism, and was applied to Jews studying holy texts.

Camel – Gamal in Hebrew, it’s also close to the name of the third letter in the Hebrew language (gimmel), which some people say a gamal, or camel, resembles.

Beezelbub – It’s not only a scary character from horror movies. The term comes from the Hebrew words baal, meaning Lord, and zeevuvim, meaning flies. “Lord of the Flies” is a pagan image, denoting someone at home amongst death, which attracts flies.

Sapphire – In the Torah, God’s throne is described as a sapphire, blue like the very heavens: a sapphire is sappir in Hebrew.

Big Kahuna - It’s not just frat-boy slang. Kahuna refers to the holiness of the Cohanim: Aaron and his descendents who officiated in the ancient Temple in Jerusalem.

Edenic – Referring to Eden, the perfect garden in which God created Adam and Chava (Eve), the first human beings, edenic means something perfect and enjoyable in English today.

Babble – The Torah recounts how the generation after Noah tried to build a tower high enough to reach the very heavens and challenge God. Instead, God toppled this Tower of Babel, and punished its builders by multiplying their languages so they could no longer understand each other. The English word babble – meaning nonsensical sounds – commemorates this famous Biblical story.

Jeremiad – This English word, meaning a long lamentation or tale of woe – comes from the Hebrew prophet Jeremiah, who lived through the siege and fall of Jerusalem and the enslavement of the Jews in conquering Babylonia, and consoled his fellow Jews with visions of a future in which they would restored to the land of Israel.

Brouhaha – This word, meaning a noisy or overexcited reaction or response to something, was borrowed by English speakers from the French in the 19th Century. It’s thought to derive from the common Hebrew welcome Baruch Ha-ba, or Blessed is He (or she) who comes. To those who didn’t understand Hebrew, it’s likely that Baruch Ha-ba sounded like a noisy confusion of sound – a term that was extended to any such uproarious speech. http://www.merriam-webster.com/word-of-the-day/2011/07/02/

Maven – This Yiddish word has passed over into common English usage. Meaning a wise person who knows a lot, it derives from the Hebrew word mavin, or understand.

Abacus – A manual computing device consisting of a frame holding parallel rods strung with movable counters, the word abacus originally referred to a drawing board that was covered with dust. (People did sums in the dust, wiping it clean when they were finished.) Abacus thus comes from the Hebrew word Avak, meaning dust.

Macabre – Suggesting the horror of death and decay, the word macabre entered Hebrew from the French. It’s thought to derive from the Hebrew phrase “from the grave”, or me-ha-kever.

Hallujah - used to express praise or joy, this comes from the Hebrew words Hallel meaning praise and Ya, denoting God.

Scapegoat – in ancient times, on Yom Kippur, two goats were selected to help atone for the people of Israel. One was sacrificed to God; the other – the scapegoat – was symbolically loaded with the people’s sins and sent into the wilderness. In modern English, a scapegoat is someone who takes the blame for what others have done.

Behemoth – This English word meaning a huge animal comes from the Biblical Book of Job (40:15), where it’s described as a large, grass-eating animal. In modern Hebrew, behemoth means domesticated animal, like a cow.

Seraph – In Hebrew, the Seraphim (the singular is Seraph) are angels who exist to sing the praises of God. A famous Jewish Midrash (story) explains that when God created humans, the Seraphim cried out: “We love and worship you perfectly! Why did you have to create these messy human creatures? Aren’t we good enough for you?” To which God replied that people, having free choice, are capable of bestowing an even greater love to God than the perfect Seraphim.

Cherub – Cute, curly-haired children in English, Cherubs are another kind of angel in Judaism. Fierce and mighty, Cherubim are angels that enforce God’s will with fiery swords: the word comes from cherev, the Hebrew word for sword.

Jubilee – Meaning a special anniversary, this word comes from the Hebrew Yovel. In ancient Israel, the Yovel year occurred once every fifty years: it was a time for debts to be forgiven and for indentured servants to go free.

Shibboleth – Meaning a password or a phrase that’s distinctive to a group, this English word comes directly from the Hebrew. In ancient times, the nation of Gilad attacked the Tribe of Ephraim, and came up with a unique way to identify who was a member of that tribe or not: they asked each man they came across to pronounce shibboleth, meaning a stalk of grain: the members of the Tribe of Ephraim had an accent that betrayed them when they said the word. In modern Hebrew, a shibboleth is an ear of corn; a shibboleth shu’al means oat.

Sabbatical – The concept of taking a year off for personal research or work comes from the Jewish idea of Shabbat, when Jews rest and cease from their weekday work.

Sabbath – Likewise, the weekly Sabbath is the English version of the Hebrew Shabbat.

Amen – This common ending to prayers comes from the Hebrew word emunah, or belief; it’s in effect a way of saying “I believe what was said is true.”

I'm grateful to all the readers who have written in with comments and criticisms.  A few words on this list have origins that are different or more obscure than I stated.

It looks like I made a mistake with macabre, which is derived from Hebrew, but in a different way: in the Middle Ages, the Latin Chorea Maccabaeorum, Dance of the Maccabees, was a traditional feature of morality plays, probably representing the slaughter of the Maccabbees (from the period of Chanukah).  This was translated into French  as Danse Macabe, which evolved into Dance Macabre, the "Dance of Death".

Ruthless, which many pointed out derives from the old English word for pity, has nonetheless been linked to the Jewish idea of Ruth as the epitome of compassion and pity by Rabbi Lord Jonathan Sacks, in his book To Heal a Fractured World.  "Kahuna", which refers to the holiness of the Cohanim who officiated in the ancient Jewish Temple in Jerusalem, has a similar meaning in Hawaiian, in which it refers to a doctor or sorcerer.  Other words on this list have origins that are obscure: as I pointed out, some linguists think copacetic derived from Hebrew, but are not certain.  Abracadabra is another word whose origins are obscure: many think it derives from Aramaic, others point to Greek origins.

How I’m Coping with the Loss of My Adult Son

The Psychopath Inside: Yom Kippur, Free Will & Determinism

Q&A: What is the Significance of the Shofar and Rosh Hashanah?