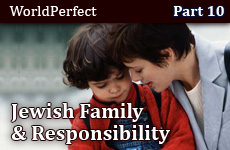 Jews have always appreciated the importance and centrality of a strong family unit. In the areas of sexuality and the relationship between men and women, Judaism introduced some very significant innovations.

The Bible describes the relationship between man and woman:

A man shall leave his mother and father and cleave to his wife, and they will become one flesh. (Genesis 2:24)

Judaism is teaching that a man and a woman are two halves of a whole. Far more than just a partnership or a team, your spouse is your other half, your soul mate. Together this "whole" not only helps bring new life into the world, but also raises and educates people to function as constructive members of society. 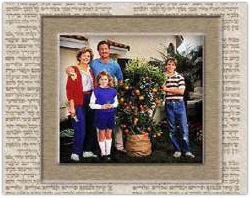 Jewish law requires a man to control himself physically and focus his sexual and emotional energy on his wife exclusively. Judaism was therefore unique in the world when it came out and forbade homosexuality, pederasty and bestiality – and held marriage as the ideal state.

This has tremendous implications on the status of women in society. Jewish law mandates that a man must love and respect his wife, even placing on him the legal obligation to satisfy her sexually. Not doing so is grounds for divorce in Jewish law.

Remember the Greek poet Palladus? "Marriage brings a man only two happy days: the day he takes his bride to bed and the day he lays her in her grave." What a difference. Do not underestimate the power of these Jewish ideas about relationship and their impact on the world. In terms of Greek and Roman culture, monogamy was a revolution that had a profound impact, not just on the stability of the family, but on society as a whole.

Dennis Prager, a well-known writer and speaker on Jewish topics, had this to say about the subject:

Man's nature, undisciplined by values, will allow sex to dominate his life and the life of society. When Judaism demanded that all sexual activity be channeled into marriage it changed the world. It is not overstated to say that the Torah's prohibition of non-marital sex made the creation of western civilization possible. Societies that did not place boundaries around sexuality were stymied in their development. The subsequent dominance of the Western world can, to a significant extent, be attributed to the sexual revolution initiated by Judaism and later carried forward by Christianity. (Dennis Prager, Ultimate Issues, April-June 1990)

The Jewish people are highly attuned to the idea of being responsible to society and the world. Jews give charity in far greater proportion than others. For example, the United Jewish Appeal raises $750 million annually, making it the third largest charity in the U.S., after the Red Cross and the United Way. Keep in mind that Jews constitute about 2% of the total population of the U.S.

When you see a human being in distress, you have an obligation to help him. Judaism mandates positive behavior, which is a unique innovation in law. In other legal systems, it's not a crime to be a bystander, even in America today. In Judaism, however, social consciousness is a legal obligation, as the Torah states: "Do not stand by your neighbor's blood" (Leviticus 19:16). 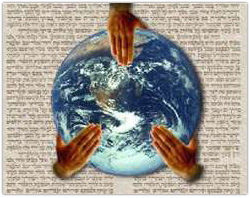 The message that Judaism teaches is that you are responsible for the world. The Talmud teaches that every person must say to himself, "The world was created for me," not as a statement of ultimate self-centeredness, rather out of a sense of unique responsibility for the world. This is my world and I’m it’s caretaker. If there’s a problem, I’ve got to do something about it.

The obligation to "fix the world” is referred to in Jewish writings as Tikun Olam.

Jewish law is very specific about our obligation toward others, including how much money one should give to charity, what percentage of crops belong to the poor, hosting guests, visiting the sick and other acts of kindness. Every Jewish community throughout history had a social welfare infrastructure. Martin Gilbert, in A Historical Atlas of the Jewish People, notes that 100 years ago, 5 million Jews lived in poverty and oppression in the giant ghetto of Eastern Europe called the "Pale" of Jewish settlement. Of those 5 million, none of whom were wealthy, 14-25% lived off community charity. That's a minimum of 700,000 people supported by the community.

Being responsible for the world includes animals and the environment. In Jewish law, you cannot eat before your animal eats. You're not allowed to be cruel to an animal. If you see an animal in distress, you have to help it. You can't cut down a fruit tree, even in a time of war.

Model for the Modern World

The humane values of the Bible became the basis for social welfare. This is the vision of social responsibility that was adopted by modern European and American thinkers over the last 200 years.

The Bible has been the Magna Carta of the poor and oppressed; down to modern times, no state has had a constitution which the interests of the people are so largely taken into account, in which the duties so much more than the privileges of the rulers are insisted upon, as that drawn up for Israel in Deuteronomy and Leviticus. Nowhere is the fundamental truth that the welfare, in the long run, depends on the righteousness of its citizens so strongly laid down. (Gabriel Sivan, The Bible and Civilization, Keter Publishing, 1973, p. 77)

Huxley is saying that the Jewish vision of social welfare is the reality that we are all modeling ourselves after. 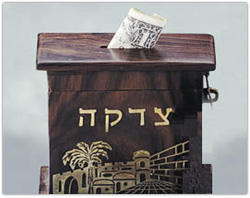 It would be impossible to mention any other people even at a much later age... whose law and constitution embodied an ideal so noble as that embodied in the Hebrew civil laws, or any people whose history shows the existence of such political institutions so essentially just, free, and humane... We Gentiles owe our life to Israel... It is Israel, who in bringing us the divine law has laid the foundations of liberty. It is Israel who had the first free institutions the world ever saw... When sometimes our own and Christian prejudices flame out against the Jewish people, let us remember that all we have and all that we are, we owe, under God, to what Judaism has given us. (Life and Literature of the Ancient Hebrews, 1901)

It is clear that Judaism has contributed to humanity a moral vision, a blueprint for an ideal world. Since antiquity, the Jewish people have stood for the six fundamental values that comprise our vision of a perfect world.

The Jews presented it to the world and, to a large extent, lived by it. Despite being subjected to horrendous persecutions, the Jewish people, maintained a level of humanity and caring that usually far exceeded the surrounding civilizations.

The question is: What gave the Jewish people the unique insight and genius to embody these values, something ancient Greece and Rome were unable to do?

Why was it only the Jews?

Part 1: Key Values for a Perfect World
Blocked Goals and Anger
Why the Mezuzah is Placed on a Slant
Faith: the Axis Upon Which the Wheel of Science Turns
Comments
MOST POPULAR IN Seminars