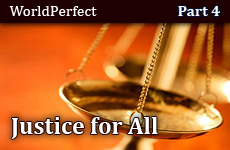 Greek democracy was far from “one person, one vote.”

Justice and equality are the foundations upon which democracy stands. These fundamental principles insure that all citizens have the right to be treated equally before the law, regardless of their status in society.

Were justice and equality valued in the ancient world? How would you classify the socio-economic position of the average man of antiquity, living in Europe, Asia or anywhere else?

The typical relationship between the public and the aristocracy is reflected in the Feudal System.

Joe Average was a serf, a peasant, which usually meant that he either farmed land that he didn't own, or owned his land but gave most of his crops in taxes to his lord. Certainly he occupied the bottom of the economic barrel. This was the position of the overwhelming majority of people throughout history.

Above the peasant masses existed a tiny minority, the ruling elite, and the nobility. What gave them the right to rule? Were they democratically elected by the masses?

Popularity did not determine ruling status; wealth gave them their power. They practiced the "Golden Rule" that is, "He who has the gold makes the rules." Ancestry, success in killing enemies and in conquest of land, and the value and expanse of one's property were the key determinants in the right to rule. It had nothing to do with democracy, personal integrity, education or competence. We see this as well in feudal Europe and feudal Japan, and almost everywhere else throughout history.

A king or an emperor usually presided above the nobility. He was all-powerful, completely above the law, and often given the status of a god.

The vast majority of the people were not protected by any lawful procedures, and lived at the mercy of the small ruling elite. The serf couldn't go over to the nobleman and say, "Your horse knocked me over. I'm going to sue you!"

As a matter of fact, in many feudal and quasi-feudal societies, the lord practiced what was called droit de seigneur, "the right of the lord." According to this practice, the lord or nobleman would take the peasant's bride on her wedding night and rape her, before the new bridegroom consummated the marriage. This was considered a legal right of the lord over his peasants.

The concept of democracy – meaning "government of the people" – comes from the Athenian Greeks. About 2,500 years ago, in the Golden Age of Athens, Peracles established the most perfect democratic system in history. In Athens every citizen voted directly. (Today we have representational democracy: You vote for someone who will [hopefully] vote in your interests.)

Who voted in this beautiful Greek democratic system?

Who were citizens? Was it: 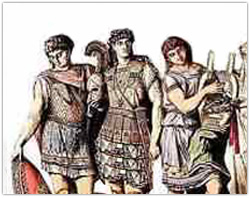 The answer is (C): land-owning, adult men. That is not a very large percentage of the population of Athens. Historians estimate that several hundred thousand people populated Athens. Of that number, about 50% were slaves. Of the remaining half, the vast majority were women, children and craftsmen, all of whom were barred from the democratic process. In the final reckoning, only a few thousand males actually qualified to vote.

True, this system was more advanced than anything else at the time, and serves as the basis of modern democracy. But it was far from our modern democratic vision of the egalitarian system of one person, one vote, and equal justice for all. Even the greatest Greek thinkers did not regard the latter approach as logical.

The Greeks distinguished strongly between different types of persons and thought it only proper to treat them differently. This inequality of treatment they endorsed in the name of Justice. An endorsement that, with Aristotle, included the justification for slavery... only those men were citizens who had certain qualifications. Beyond them – it was taken for granted were all women, farmers, slaves, mechanics, labors, freed men and aliens... (Henry Phelps-Brown, Egalitarianism and the Generation of Inequality, Oxford University Press, 1988, pp. 15-16)

Our basic idea of justice and equality was not a reality for the vast majority of world history.

Part 7: Social Responsibility
Blocked Goals and Anger
Why the Mezuzah is Placed on a Slant
Faith: the Axis Upon Which the Wheel of Science Turns
Comments
MOST POPULAR IN Seminars