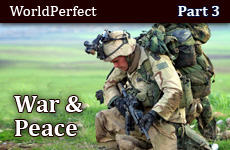 Nations often employ the law of the jungle: Might makes right.

There is an estimated 2,000 pounds of explosive material for every person on Earth today. There is not 2,000 pounds of food or medicine for each person. The amount of resources, money and technology that countries spend to create weapons of mass destruction is mind-boggling.

Do any of us doubt that the world would be a completely different place if all our resources and energy would be spent on food and medicine, social programs, and environmental health?

We understand that the concept of peace and harmony is vital to the future survival and development of humanity.

What were the attitudes of antiquity?

The destructive nature of war is so obvious to us today, but was it obvious to the peoples of the ancient world? We certainly can't claim that we're smarter – you don't often meet people like Aristotle, Plato and Socrates nowadays. Why has humanity been perpetually locked in warfare for over 5,000 years since the dawn of civilization?

The law of the jungle is that the strong devours the weak. Nations often act the same way: "If I am stronger, it is my natural right to conquer. Might makes right."

The Romans had a 200-year period called "Pax Romana" ("Roman Peace") characterized by relative calm and stability. Yet the Roman idea of peace was, "Let us conquer the world and subdue all threats to empire!" This is very different from our 20th-century concept of peace on a global scale. Many other countries in history have also employed peace as a temporary break between wars, in order to re-arm. 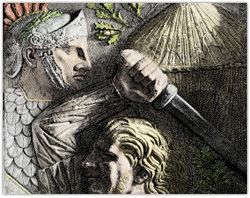 Who is glorified in antiquity? The warrior. Homer's The Iliad – one of the great classics of Greek literature – is one giant battle scene. He with the greatest success in killing strong and numerous opponents is the hero. The hero was honored in his lifetime and glorified in his death by song, poetry and elaborate monuments. The far-reaching effect of such glorification impacts us even today. Soldiering is considered both a manly and a gentlemanly pursuit.

The description of the Greeks holds true for all civilizations:

"War, therefore, is in the mind of the poet, the chief business of men from youth to age. But he regards it as special flower of youth... The glorification of war, the glamour and glory of battle were subjects of the finest words and pictures..." (Wallis Caldwell, Hellenic Conceptions of Peace, Columbia University Press, 1919)

Harmony may have been an abstract idea for a few individuals in world history. But real peace was never a practical reality in world history, by any stretch of the imagination.

Part 7: Social Responsibility
It Takes A Lot Of Faith To Be An Atheist
How Instagram Brought Back This Nostalgic Soup
What Makes Eli Run?
Comments
MOST POPULAR IN Seminars