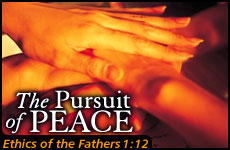 The path to peace is through loving others and loving Torah.

"… Hillel says: Be among the disciples of Aaron, loving peace and pursuing peace, loving people and bringing them close to Torah. "

Our Mishnah suggests that in order to pursue peace, one has first to love it. To have a license to preach one has first to be a practitioner. Otherwise, the love, the message, the overture, although potentially packed with symbolic value, is essentially empty of substance.

Peace is arguably the noblest goal anyone can pursue, especially these days. And not only in global politics, but in our very relationships, be they in marriage, family or self. Wars, divorce, generation gaps, Prozac -- the ideal of peace is desperately sought after on every level.

And, yet, while its virtues are sung almost daily, its attainment often remains as elusive as ever. Indeed, the Talmud states that in the generation before Mashiach (the Messiah) comes, in addition to wars and drugs, there will be interpersonal discord like never before. One reason, our Mishnah suggests, as will be explained, is that peace is sometimes best achieved not when viewed as a goal, but rather the result of a common goal.

This can be illustrated by a teaching in the Talmud about the secret to marital harmony. The Talmud points out that the Hebrew words for man (ish) and woman (isha) share two identical letters (aleph, shin), and retain one letter each (yud for the man, hey for the woman). The common letters (aleph, shin) spell "fire" in Hebrew. The letters, when combined, spell "God."

When God is absent from the equation of an intimate relationship, the only thing that remains is "fire": the two parties consume each other.

Thus, the Talmud explains, when God is absent from the equation of an intimate relationship, the only thing that remains is "fire": the two parties consume each other. Materialistic man and woman are doomed for discord. The only hope for harmony is when they access and employ their spiritual, Godly potential.

Imagine a pyramid with a husband and wife standing at the foot of it, facing each other, but hundreds of yards apart. Sometimes they move closer to each other, sometimes farther apart. Often when they get too close they repel each other.

A better and more lasting way of getting the two together is for them to start at their respective corner of the pyramid and begin scaling it. As each individual moves up toward the point of the pyramid they naturally grow closer to each other. When they both reach the top there is a true and lasting oneness between them.

That's the difference between concentrating exclusively on "the relationship" versus concentrating on the common goal, and letting the relationship flow naturally from that. (That common goal may be raising children, making money, developing a business together, giving charity, campaigning for a political ideal. For many couples, it may be an ideal set out according to their religious principles. Whatever it is it's something that both of you feel in your bones is a worthy and necessary goal to strive for.)

The metaphor of scaling the pyramid implies that neither is doing the same thing, yet they are at the same time striving for a common point. Each has a side with its own terrain to scale, but the common point means using that ness to create a common result.

Thus the Talmud teaches that the secret to marital harmony -- and by extension, every other relationship between individuals, groups and nations -- is the pursuit of a common spiritual goal.

AND BRING THEM CLOSE TO TORAH

And that is where "bringing them close to Torah" comes in. The Torah is the guide map the Almighty gave us to know if one is pursuing God, who made people in His image, or pursuing a god fashioned from the projection of some human image.

The Torah, the ultimate revelation of God and His will, is the absolute point of the pyramid, the goal that includes within it all spiritual striving. Our soul's deepest desire is to move ever closer to that point.

When Torah is the common goal, then peace is the natural outcome.

When Torah is the common goal, then peace -- the first part of the Mishnah -- is the natural outcome. The Talmud says that Torah scholars increase peace in the world. The more Torah, the more peace. This is because Torah is the peak of the pyramid, the common point.

People may not always see eye-to-eye, in fact they may seem miles apart. But if they are scaling the pyramid toward that ultimate peak, they are moving closer together, even if it's only inch-by-inch.

The problem is that many people find it difficult to relate to spiritual concepts -- to holiness, Torah, God. They're too abstract, too other-worldly. Our Mishnah addresses this when it exhorts us to "love people" before telling us to "bring them close to Torah."

The Talmud tells us that when Hillel, the author of our Mishnah, was asked to explain the Torah as succinctly as possible, he answered: "Do not do unto others as you would not want them to do to you. That is the entire Torah. The rest is commentary." Rashi explains that, "Do not do unto others..." is the Torah's command to, "Love your neighbor as yourself," worded in the negative, i.e. the minimum level of behavior each person is expected to adhere to. It's not always possible for every person to actually love others as him or herself. Nevertheless, at the very least, "Do not do unto another as you would not want done to you." This is the minimum.

Of course, if everyone did at least the minimum, the world would be a much better place.

Loving others is the cornerstone of Torah, the cornerstone of spirituality. When Abraham was speaking with God he interrupted the experience to go outside and host three lowly-looking strangers. This led the Talmud to conclude: "Kindness to others supercedes even experiencing God's presence." This world, after all is said and done, is the place to perform kindness to others. The next world is the place to experience God.

Loving people is something everyone can relate to and do. In our metaphor it's the side of the pyramid that leads to the peak (Torah). This is why our Mishnah concludes: "Love people, and bring them close to the Torah." Loving people is the ladder to spirituality.

Indeed, the Hebrew word for "people" (briyot) used in the Mishnah literally means "creations" or "creatures" (cognate of the word used in Genesis 1:1, "In the beginning God created…"). Our love of people should be rooted in the awareness that every one and every thing is created by God. People are made in the Divine Image. And if for no other reason, they should be loved.

Loving people and loving God are really one intertwined whole. Each leads to the other. Each is simultaneously the way to and the goal of the other.

Every individual has a spiritual mountain to climb. The Torah is both our map and our goal. The result of such a pursuit can only be that most elusive of ideals: peace, shalom.

Looking for God Amidst the Pain

Is Zoom a Window or a Mirror?

The Location of the Soul: Ethics of the Fathers, 3:3

Winning the Internal Battle
The Blue Beyond
Great Place to Live
Is Eating Supposed To Be Spiritual?
Comments
MOST POPULAR IN Spirituality
Our privacy policy