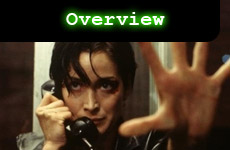 A brief look at the story line.

Neo: That was you on my computer. How did you do that?

Thomas Anderson is known in the hacker world as Neo. He is pulled from the life he has always known and shown that in actuality it is the year 2199. Freed from his pod, Neo is brought aboard the hovercraft Nebuchadnezzar where he learns the truth of reality.

Neo: What is the Matrix?

Mankind has lost a war with their Artificial Intelligence computers. Now humanity is held unconscious, grown in pods by the computers for bio-electrical energy, and the world that Neo has lived in is simply a virtual reality, designed to keep the cultured humans viable.

Neo joins those who woke him and becomes an integral part of the resistance. Through building awareness and choice, Neo awakens his potential and is able to overcome the seemingly invincible enemy. Why build a site around this film? The film is a powerful metaphor expressing universal concepts of Judaism.

Morpheus: I'm trying to free your mind, Neo, but I can only show you the door, you're the one that has to walk through it. Tank! load the jump program.... You have to let it all go, Neo, fear, doubt, and disbelief. Free your mind.