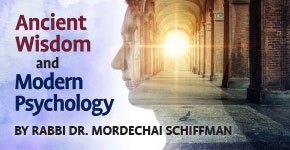 Harvard Professor Amy Edmondson argues that the best organizations are “fearless.” By fearless, she does not mean that they make bold and daring decisions, but rather, that they create a culture of psychological safety, where employees aren’t afraid to make suggestions, ask questions, or admit mistakes.

By removing fear from the equation, the business is able to innovate, grow, and thrive. Part of the process of becoming fearless is to promote the detection and reporting of intentional or unintentional failures, both big and small, as early on as possible. After detection, it is essential to deeply analyze failures to understand their root causes and then try to mend them and learn for the future.

This week’s Torah portion details the intricacies of several different types of sacrifices. The first three are optional (Burnt offering – Olah, Flour offering – Mincha, and Thanksgiving offering – Shelamim) and the last two are mandatory (Sin offering – Chatat and Guilt offering – Asham). The latter two are obligatory because they come as a result of a sin. The failure requires atonement. The Chatat, though, requires explanation. It is brought for sins committed unintentionally (shogeig). Why should an unintentional sin require atonement?

Perhaps one of the goals of requiring these sacrifices is to create psychological safety for sin and failure. The institution of sacrifices balances the normalization of sin with responsibility and accountability. Try and detect all levels of failure, intentional and unintentional. When we become aware of shortcomings, we should own up to them. There is a system in place for everyone, even the anointed priest (Kohen Mashiach) and the leader (Nasi), to atone for their unintentional sins. We should not be afraid to admit our failures.

After detection and acknowledgment, it is important to analyze the root cause of the failure. Professor Edmondson argues that most businesses only conduct a superficial review and don’t sufficiently detect the underlying factors. For the purposes of the Chatat sacrifice, this may be a little tricky. If the sin was an accident, what sort of deeper reason could be ascribed to the shortcoming?

While the particulars of each case should be analyzed individually, there are several broad approaches in our tradition that may serve as a starting point for a personalized investigation. One possibility is to assume that while the act was inadvertent, there may be a subconscious desire lurking beneath conscious awareness. Such a perspective, which overlaps with a Freudian understanding of the subconscious, is suggested by both the Shem MiShmuel and the Lubavitcher Rebbe. In a slightly different approach, Rabbi Eliyahu Dessler suggests that a person does not make mindless errors in an area that is an integral part of their identity. The mistake reveals that the value in question was not adequately prioritized or internalized. Finally, Rabbi Shimshon Raphael Hirsch contends that even though it was not done on purpose, the failure is indicative of a lack of attention and carelessness. This itself is a lack that is worthy of atonement.

Whichever perspective one takes, the key point is that there is a lot one can learn regarding even inadvertent failures. The Sin offering both served as a way to provide the context and safety to recognize failures and provided the space and framework for self-reflective analysis. Even without the particular sacrifice in the present day, we would do well to learn from the eternal message by creating spaces where we can all healthily admit and analyze mistakes for the sake of personal and communal growth.