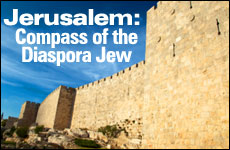 Somehow we always know how to seek Jerusalem, whether it's by Babylon's rivers or the Hudson.

We're standing in downtown Manhattan, overlooking Liberty Harbor. The woman standing next to me points to the view: "Doesn't it almost look like Jerusalem? That terrace over there and that tree? The way the sun is setting?"

I gaze for a minute at the view. We stand overlooking a dark Hudson River, a boat passing by, the Statue of Liberty in the distance.

She's not happy with my answer. She's fresh off a spring break Birthright trip and probably still seeking Jerusalem.

I've learned to nod politely in these moments. I understand her. It's like stepping off a plane in JFK, catching a waft of spices and still smelling Jerusalem.

Somehow we always know how to seek Jerusalem, wherever we are: whether it's by Babylon's rivers or the Hudson. It's some kind of inner compass which directs us there – not just for times of prayer, but in everything, on our living room walls and our silk paintings, in our wedding invitation calligraphy, our whispered consolations to mourners.

Even in the Soviet Union. My mother tells me about her childhood in the far north of Russia, the wait for exit visas in the '70s. She tells me of dark winter nights, secret copies of Exodus, gatherings with fellow Traitors of the State and political activists. Jerusalem: it was the magical formula whispered between activists.

"Soon, we'll be sipping coffee together in a Jerusalem café," Mark Morozov, one of the activists, said upon farewell, as my mother's family gathered to emigrate. A Jerusalem café – what does a Moscow Jew know about a café in the Middle East?

The idea of Jerusalem is ingrained in the subconscious of the Diaspora Jew, arguably a different image than the one preserved by the Israeli. A place, yes, but also a reality, an ideal to constantly face and strive towards. It's become the perfect metaphor for all of Israel, and even for Jewish identity itself: a complicated place of winding streets, hills and valleys, divided, beautiful and tense. A fusion of east and west, ancient and modern, "always of two." As Yehuda Amichai notes in his poetry: It is at once an object of fantasy and also entirely mundane.

And often, it is the ordinary which penetrates the Diaspora Jew. It's not just praying by the Western Wall or wandering the Old City, but it's also about that bus ride you take and the kind old man who blesses you and hands you a bag of fresh lychees. Is it naive, perhaps, that I melt a little, every time I walk by children playing in the city's streets? That I can spend months in that place, and still shake my head in disbelief over the miracles that took place there? Is it possible to yearn for the place in which one already stands?

Some Israelis laugh when they watch us grow misty-eyed: "You're impassioned with this place, aren't you?" They tolerate it, wonder at our shameless romanticism, smile at our naiveté.

But I've come to be proud of my naiveté. It's that same idealism of standing by the Hudson and seeing Jerusalem somewhere in the distance, the same fervor of the early pioneers and their ruthless conviction, the same whispered Soviet conversations.

Soon, we'll be sipping coffee together in a Jerusalem café. That activist, who had promised to meet my family in Jerusalem, died in a Soviet prison seven years afterwards. My mother's family settled in Brooklyn. But the stories of those wintry nights, of waiting for an exit visa, remain strong. We're still seeking, straining, to see Jerusalem from afar.

This Jerusalem Day I am reaffirming my conviction to return, if for no other reason than to sit in that Jerusalem café, for the sake of those who couldn't.

Avital Chizhik is a recent graduate of Stern College for Women and the outgoing president of the Yeshiva University Israel Club. She hopes to make the big move to Israel before next Jerusalem Day.

What's a London Girl Like Me Doing as the Northern Spokesperson for the IDF?

From Passaic to the Promised Land: 7 Surprises about Living in Israel

Each Name A Promise

Israel Up Close
It Takes A Lot Of Faith To Be An Atheist
How Instagram Brought Back This Nostalgic Soup
What Makes Eli Run?
Comments
MOST POPULAR IN Israel
Our privacy policy