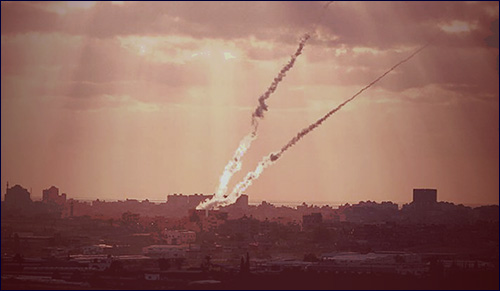 What you can do when your brothers and sisters are at war.

Growing up in New Jersey, war was something we read about in history books. Since moving to Israel 29 years ago, I’ve lived through five wars.

The first was the Gulf War of 1991. Saddam Hussein’s threats to incinerate all of Israel had us making “sealed rooms” of plastic and tape. When the siren went off, we ran to our sealed rooms and donned our gas masks. My three-year-old daughter refused to wear her mask. Panicked, I forced the mask onto her. The next morning the news reported that, while there were no casualties from the Scuds, a four-year-old Israeli Arab girl had suffocated to death when her parents forced her gas mask onto her. I listened to the radio trembling. Thirty-nine Scud missiles landed in Israel, decimating buildings but killing only one man. Instead of poison gas, the air of Israel was thick with miracles.

Instead of poison gas, the air of Israel was thick with miracles.

Not so the Terror War of 2000-2004. The front lines of that war were on our busses, in our malls, at our Bar Mitzvahs and Seders, and in our downtown areas. Over 1,000 Israelis were murdered in that war, mostly by suicide bombers. For four years we lived in fear and prayer. We tired of attending the funerals of children. Our Books of Psalms were drenched in our tears.

The Second Lebanon War, in the summer of 2006, started as an effort to retrieve two reserve soldiers abducted by Hezbollah terrorists at the Lebanese border. Hezbollah fired a barrage of missiles on northern Israel. Forty-four civilians were killed in the bombing, and most of the residents of the North fled southward. When all the hotels of Tel Aviv and Jerusalem could not hold the refugees, community centers with army cots and thousands of private homes opened their doors. Taking a walk one night, my husband and I passed a young couple pushing a baby in a stroller. They had fled from their home near Haifa and had stayed for three nights in a Jerusalem hotel. Now, however, the hotel had evicted them because someone else had reservations. We invited them into our home, and they lived with us until the war was over. Tragically, 121 of our young soldiers were killed. And when the two abducted reservists were finally returned, in exchange for arch terrorist Samir Kuntar and four other Hezbollah prisoners, we got back only their corpses.

While Israel’s North was struggling to recover and rebuild, the South came under repeated rocket attacks from Hamas that Gazans had democratically elected as their government. Hamas launched over a thousand missiles on civilian targets in Israel. Life in Israel’s South became a continuous nightmare of Code Red sirens, sending children and adults desperately scurrying for shelter. So, in December 2008, Israel mobilized Operation Cast Lead, sending in ground troops to stop Hamas. Our role in that war was to pray, and to send food packages and warm socks to our soldiers at the front.

After a short period of quiet, rocket attacks from Gaza, now augmented by longer-range Russian Grad missiles that terrorized major cities such as Beer Sheva and Ashdod, gradually increased again. So in November 2012, Israel launched Operation Pillar of Cloud. The international community, silent as Israel was bombarded by Hamas, loudly condemned Israel’s military campaign to stop the rockets. Fighting Hamas on one front and international opprobrium on the other, Israel was hit by 1456 rockets and missiles, which killed six Israelis, injured 240, and sent another 200 into shock. Post Traumatic Stress Disorder became an epidemic in southern Israel.

And now we are at war again. The government has approved to call up some 40,000 reservists – mostly husbands and fathers. So far 8,000 have been called up. Our soldiers – those who can be spared from quelling the Arab riots throughout Israel – are amassed at the border of Gaza. Over the last eight days, close to one million Israelis have sought refuge in bomb shelters. Some 225 Hamas missiles have been fired at Israel in the last 36 hours, some reaching Tel Aviv and almost to Haifa.

On Tuesday night I was giving my weekly Marriage Webinar from my Jerusalem home to women all over the world – in France, England, Ireland, Australia, Canada, Mexico, Chile, Israel, and throughout the United States. In the middle of the webinar, a comment appeared in the Question Box from a woman in Ashdod: “We had a Code Red siren so we had to go down to the bomb shelter. Now I have to put my children back to bed. I’ll have to listen to the webinar recording tomorrow.”

I resumed giving my class, but a few minutes later I heard the wail of a siren pierce the air.

I was taken aback by this live message from the war zone. I recounted to my listeners that the night before, my daughter was at an outdoor wedding near Beit Shemesh, a 40-minute drive from Jerusalem, when the Code Red siren went off. The dancing stopped, and the bride, groom, and wedding guests, having no building to take refuge in, ran to a decorative wall. Looking up, they saw the missile from Gaza as a beam of light streaming across the sky. Suddenly it was hit by the Iron Dome (Israel’s anti-missile defense system), creating a loud explosion and a brilliant glow in the sky. Happy wedding!

At that point in the webinar, I told the participants that we were going to stop and pray. Israel is at war. We should pray for the residents of the South and the safety of our soldiers. After a minute, I resumed giving my class, but a few minutes later I heard the wail of a siren pierce the air. I was puzzled. We had not heard air raid sirens in Jerusalem since the Gulf War had sent us dashing to our sealed rooms. “I’m hearing a siren,” I told my listeners across the world.

Our building has no bomb shelter. We are supposed to use the bomb shelter across the street, but it can barely hold the residents of that building. So I simply sat here, feeling shaken, and asked my listeners to pray, this time not just for the residents of the South, but also for the Jews of Jerusalem. It turned out that Tel Aviv, Rehovot, and every major town in the crowded center of the country was also under attack.

Then comments started to pour into the Question Box:

We are at war again. Here’s what doesn’t help:

Here’s what will help:

And one last thing: Go against your basic human drive to avoid pain, and allow yourself to feel the pain of your brothers and sisters in Israel. Feel the pain of mothers and fathers whose precious sons have been sent to the front lines, of wives whose husbands have been called to active duty. Feel the pain of children throughout southern Israel who live in daily trauma: ten-year-olds who have reverted to bedwetting, teenaged girls whose periods have stopped, four-year-olds who cannot sleep for fear of the next siren.

Feel their pain, and allow it to move you to the constructive actions outlined above. Now is not the time for numbness.

Watch the short video below to feel what it is like to have 15 seconds to reach a bomb shelter.

Gush Katif: The Night After

Breathing New Life
The Promise Of The Land
Which Chat Are You On?: Parshas Behar/Lag Ba’Omer
Do You Like Slow-Cooked Food? Thank the Jews
Comments
MOST POPULAR IN Israel Diary
Our privacy policy