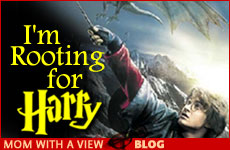 J.K. Rowling can end the Harry Potter series with hope and optimism, or cynicism and disillusionment. Let's hope she chooses wisely.

If you're very clever, you could go to J.K. Rowling's website and work your way through the puzzle that leads to the name of the last Harry Potter book in the series (fastest time: 40 minutes). If you're less clever or less motivated, you could just open up your email from Border's.

Harry Potter has gripped the imagination of readers, young and old, for a number of years now. And millions throughout the world are anxiously awaiting the story's end.

How will the conflict between good and evil be resolved? Does Ms. Rowling have an obligation to her readers to make the ending a happy one?

An informal poll of family members and Shabbos guests led to a resounding yes.

Why? Although the fictional Harry Potter is a wizard, he has never yet succeeded through the use of magic. Instead he is always rewarded for good character -- for loyalty and friendship, for courage and perseverance and determination. This is a belief and value system we would all like to see reinforced.

J.K. Rowling has encouraged millions of children to reinvolve themselves in reading. She has an even greater opportunity in front of her now.

If the series would end with the message that trickery and evil triumph, our sense of justice and fair play would take a hit, and our deeply held values shaken.

But on an even more profound level (is Harry Potter and profound an oxymoron?), the opposite is also true -- the victory of good over evil feeds our sense of hope.

Most of us deep down believe that good will ultimately succeed, and to experience it emotionally -- even in story form -- helps propel us forward. Witness the success of Rocky-like movies. Crowds cheer when the good are triumphant. We smile and feel optimistic. We are encouraged in our own desire to do good and in our belief in the efficacy of behaving that way.

J.K. Rowling is a novelist, not a religious leader. Yet she does have the psyches of many young children (and not a few older ones!) in her grasp. She can choose to further hope and optimism, or cynicism and disillusionment.

Our fantasy world can be powerful. The more it helps focus and support our real world, the better.

Though the victory of good over evil -- on personal and national levels -- is rarely without cost, I, for one, am hoping that Harry succeeds. And that Voldemort, the embodiment of evil in its most sinister and vile, is vanquished. Now the question is: how long do I have to wait to find out? And who gets the book first?

The author has earned a lot of money. She has encouraged millions of children to reinvolve themselves in reading. She has an even greater opportunity in front of her now. She can impact (all of our) vulnerable hearts and minds with the hope with which the Almighty has infused our souls. Let's hope she's up to the task.

Our Untold Stories
Saadiah Gaon, Rashi and Maimonides: How Three Rabbis Revolutionized Judaism
King Sennacherib and the Siege of Lachish
Three Small and Easy Changes to Add Positivity in Your Home
Comments