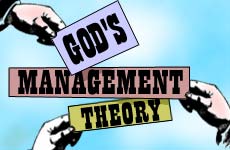 God was willing to risk His reputation in order to demonstrate how to achieve true success. The least we could do is try to emulate Him.

Jack Kahl, founder and former CEO of Manco, makers of Duck brand duct tape, has learned that the dictatorial style of running a company is not necessarily the most successful. When his father contracted tuberculosis, Mr. Kahl's mother told her children that in order to survive they would have to work together as a team. He operates his business the same way. "A great leader knows that people must be included in the company's decision-making process and that you have to share information with developing leaders rather than hoard it," Mr. Kahl related in a recent Wall St. Journal article.

This is the key to a thriving business, practically and philosophically. You don't lose by taking into account the feelings and viewpoints of others. You don't lose by treating colleagues, employees -- or anyone for that matter -- like a mensch. "Each man for himself," "It's a dog eat dog world" are not Jewish ideals. Stepping on others, stabbing people in the back will not ultimately lead to success, business or otherwise.

In addition to his mother, Mr. Kahl also cites the influence of Sam Walton. "Sam was the consummate coach, forever building up his people, telling them, 'Thank you. That's a good idea.' He shared detailed information with all his employees, even part-timers, about how much Wal-Mart paid for their products and what they sold for, so everyone felt part of the game."

Common decency, concern for others, and a check on our egos are the prerequisites to true success.

The theory of consensual management actually comes from the greatest leader of them all. When God was creating the world, He said, "Let us make man in our image..." Why the words "us" and "our"? Who is God referring to? Jewish tradition teaches that God was consulting with the angels. God was showing us how to treat others, demonstrating an inclusive style of leadership. Even though there was a risk that some detractors might use this verse as proof that there are a pantheon of gods rather than one, God deemed this principle so important that it's worth the risk. It's worth taking the risk that some individuals may rebel against the Almighty, suggesting that His power is limited, in order to communicate the crucial character traits of decency and humility.

Why? Decency and humility are nice ideas, but isn't that a high price to pay?

In an era of Enron and World.com we need to recognize this essential point: Common decency, concern for others, and a check on our egos are the prerequisites to true success.

The Almighty was willing to risk His reputation in order to demonstrate how to achieve true success. The least we could do is try to emulate Him.

The Jewish Ethicist - Unfair Zoning
Were Adam and Eve Jewish?
How I Learned to Love the Multiverse
10 Big Jewish Inventions
Comments