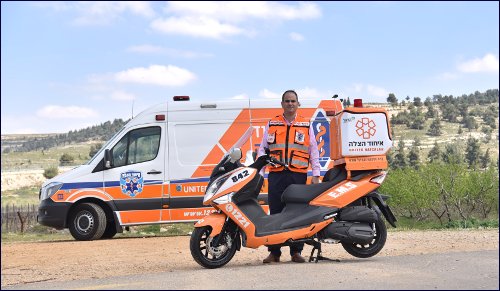 As a 16-year-old yeshiva student in Jerusalem, Eli Beer dreamed of being an EMT. He volunteered on an ambulance service, and one day received a call about a 7-year-old child choking on a hot dog. By the time the ambulance arrived 20 minutes later, the child was dead. When Eli found out that a doctor had been just a block away, he realized that the emergency medical system was in desperate need of disruption.

Summoning Israeli chutzpah, Eli convinced his parents to buy him a police scanner in order to monitor emergency medical calls. Soon after, he heard a call about an auto accident just one block away. Eli raced to the scene by foot. 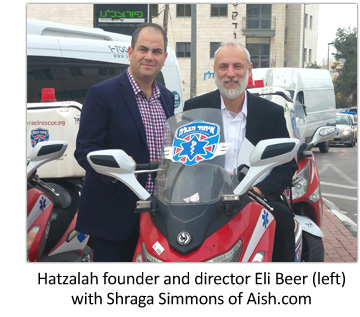 "An elderly man had blood gushing out of his neck," Eli tells Aish.com. "I had no medical equipment, so I removed my kippah and used it to apply pressure to stop the bleeding. I later found out the man was taking blood thinners and would have been dead in two minutes. The ambulance only arrived 15 minutes later. I had saved a life!"

At that moment, Eli knew his life mission: to reduce the wait-time for emergency medical care.

Eli heard about a group of Orthodox Jews in Brooklyn, New York, who had formed a local rapid-response team, and he decided to organize something similar in his own Jerusalem neighborhood of Bayit Vegan. Together with 15 friends – all EMTs – Eli bucked bureaucracy, legal tangles and resistance from existing emergency services to get launch his organization.

"Our primary objective is to get to there fast and administer treatment before the ambulance arrives," Eli explains. "Because these ambucycles are small and mobile, they're not held up by traffic jams or narrow streets. If necessary, they even go on the sidewalk."

Receiving treatment within the first minutes of a medical emergency often spells the difference between life and death. In the case of cardiac arrest, for example, the lack of defibrillation and life support reduces chances of survival by nearly 10% – every minute.

"With stroke and choking as well, the earlier the victim receives oxygen, the less damage," Eli explains. "Just today we got a call about a woman not breathing. Our dispatcher told her son what to do. One minute later, Hatzalah volunteers arrived and performed CPR. The ambulance arrived four minutes after that. Did we save her life? We never know exactly. But for every minute saved, we decrease the damage and risk of death." 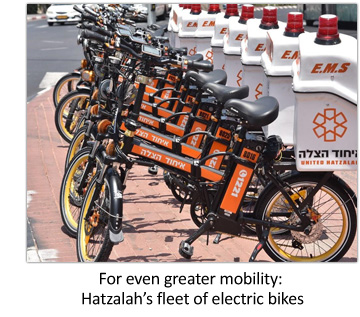 When an emergency call comes in (United Hatzalah responds to a thousand each day), LifeCompass automatically alerts the phones of the five best-positioned volunteers – based on geographic proximity to the scene, and accounting for equipment and training best suited to this specific emergency. The system then automatically transfers the volunteer to a mapping app that guides them on the fastest route.

Whether at work, school or home, Hatzalah's 4,000 volunteers carry their rescue bags everywhere they go. "A few years ago I was driving down the coastal road and received an alert that a child was drowning on a kibbutz," Eli says. "I wasn't familiar with this kibbutz, but our system immediately recognized me as one minute away. I arrived and treated the child. The ambulance came 40 minutes later. That day I saved a life."

In response to the 2014 kidnapping of three Israeli teens, Hatzalah developed an SOS app which allows anyone to send a one-touch distress signal to the 24/7 dispatch center, which transmits the GPS coordinates to law enforcement officials. 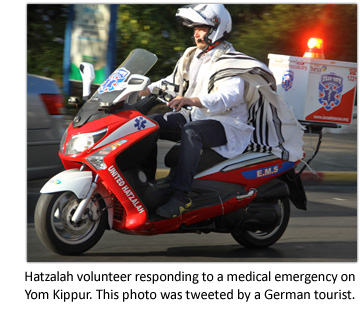 Beyond saving innumerable lives, Hatzalah has emerged as a force for positive change in Israeli society, where the divide between religious and secular, Jew and Arab, is often painfully felt.

"We've always responded to anyone who needs help, yet we began with mostly religious volunteers," Eli explains. "Then one day I got a call from a non-religious man in Herzilya. He said that in his city, people would frequently wait 15-20 minutes for an ambulance. He noticed our ambucycles operating in religious neighborhoods and wanted to bring Hatzalah to his own city."

Eli saw this as a great opportunity, and received full encouragement from the great Torah sage Rabbi Chaim Kanievsky. This saved lives and generated positive interactions between religious and non-religious Jews.

In addition, United Hatzalah instituted a course in the laws of Shabbat, so that every volunteer, regardless of background or observance, can appreciate how saving lives overrides other Torah laws. 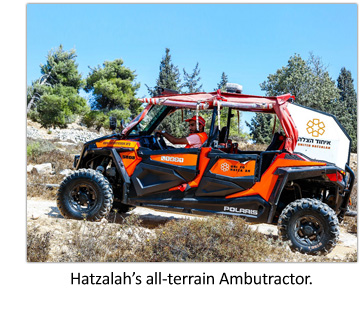 "When it comes to saving lives, we do everything we can, in every way," Eli says. "The same Jew who wouldn't accept a million dollars to drive on Shabbat, will rush out at the holiest time of year – in the middle of Yom Kippur prayers – to save a 98-year-old stranger. This value on human life is the beauty of Judaism, and it's a great Kiddush Hashem (sanctification of God's name)."

United Hatzalah continues to expand, with an annual budget of $20 million and thousands of “angels in orange” – Jews, Arabs, Druze, Bedouins, and Christians – regular citizens willing to put everything else aside and rush to save a human life, anytime, anywhere.

Eli's own family is, in his words, "addicted to Hatzalah." His wife Gitty has opened a division for religious women to treat other women, and his three daughters have joined.

Another significant breakthrough came when Eli was visited by two Muslim Arabs living in east Jerusalem. One of them, Mohammed Asli, explained that a week earlier, his middle-aged father had suffered cardiac arrest and died while waiting 55 minutes for the ambulance to arrive.

Mohammed told Eli: "Nobody was there to help my father. He died right in front of my eyes. Let us form Hatzalah in east Jerusalem, and we promise to protect anyone who needs help."

Seeing this as a unique opportunity to foster good relations in Jerusalem – as well as saving lives – Hatzalah trained 30 Arab volunteers, many with prior medical experience. This partnership proved fruitful and came full circle one year later when Eli's father suffered a heart attack on Shabbat. He describes: 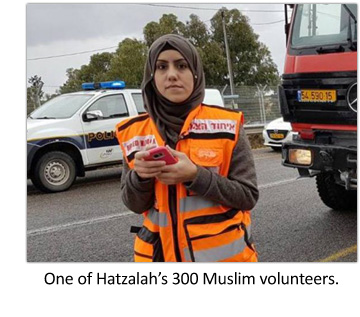 "I heard the call on the radio. I was two buildings away and immediately ran over. Yet when I saw my father lying there, unconscious, I started crying like a child. I've saved many lives with my own hands, but at that moment I simply froze up."

With Divine justice, that medic with the defibrillator was none other than Mohammed Asli, the same Arab who originally asked to join Hatzalah. "I gave Mohammed a big hug," Eli says.

This reputation extends to the Arab world as well. Al Jazeera aired a documentary on United Hatzalah's work. Eli met with the ruler of Dubai, and visited Jordan to receive an award from Queen Rania. "Being of Palestinian origin, she is not typically friendly toward Israel," Eli says. "But when she heard what we do and how we have Jewish and Arab volunteers working together, it touched her very much."

Many people associate Israel with conflict and strife. Hatzalah is helping to change that perception. The video of Eli's 2013 Ted Talk has been viewed more than one million times. He has received numerous international accolades, including Social Entrepreneur of the Year Award by the World Economic Forum in Davos, Switzerland. "The CEO of the biggest Saudi oil company approached me and said he'd never met an Israeli before," Eli says. "Then he gave me a big hug."

Beyond Israel's borders, Hatzalah has expanded into disaster relief, sending top medical responders and a psychotrauma unit everywhere from the earthquake in Nepal to the flood in Houston. 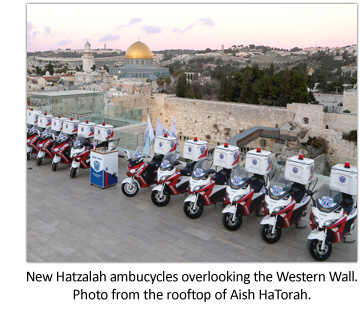 Eli is also working to replicate his rapid-response model around the globe, envisioning a world where orange ambucycles with flashing red strobes represent Israel's "light unto the nations." United Hatzalah has trained volunteers in Ukraine, England, India, Lithuania, Brazil, and dozens of other locales. Last month, Eli received an award in Panama for improving that country's emergency medical system.

Eli also worked with the mayor of Jersey City, New Jersey. Though there aren't many Jews in Jersey City, one chassidic man goes out to three calls a day, in what Eli calls "a true Kiddush Hashem."

Eli's big vision for the future? "Hatzalah is all about bringing people of different backgrounds and communities together, putting differences aside, and sharing the mission of saving lives. I would love to scale our system as a global lifesaving network, where a volunteer from any country can respond to a call, wherever he may be. "

This is a long way for Eli Beer who, as a 6-year-old, saw a bus blow up in front of his eyes while walking home from school. "I saw the fire and the chaos of injured people running from the scene," he recalls. "I didn't exactly understand what was happening, but I knew that people needed help. An old man was yelling and crying for help. I was so scared that I ran away."

Six people died and scores were injured in that attack. Till today, that memory propels Eli Beer to repair the world, again and again – 90 seconds at a time.

How Can You Defend Israel? Part 2

The Murder of Baruch Cohen

Slouching Toward Narcissism
Why Are The Prayers Of Yom Kipur So Repetetive?
Ha'azinu 5783: A Time for Unity!
Twisted Thinking
Comments