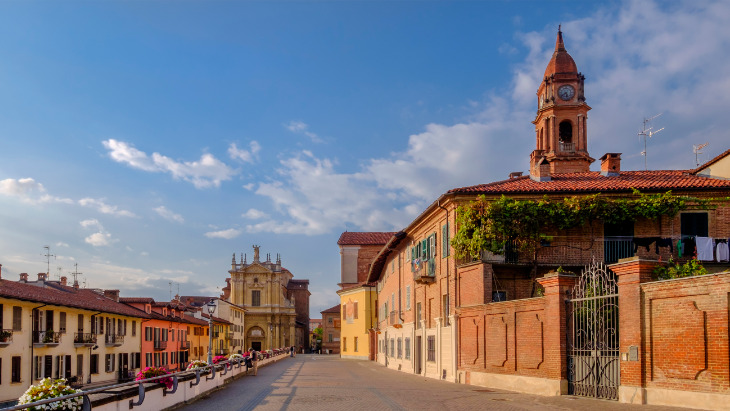 How I pulled together a last-minute slapdash Passover seder in the most unlikely of places.

We didn’t anticipate that our Italian Passover would be so hectic. I had been told we could attend a classmate’s seder, and had no reason to believe we wouldn’t be attending. My two friends from New York were visiting, and that day was our last day in Bra, my small university town. Our scramble began when my classmate Shalom said he couldn’t let us come to his Passover seder. In my disappointment (and frankly, embarrassment) I made some sad noises, anticipating that my two guests would give up on our plan to celebrate Passover before our 6 AM train to Rome the next day. This was a very Catholic town, and it was unlikely we’d find another seder. Sunset was only a few hours away. 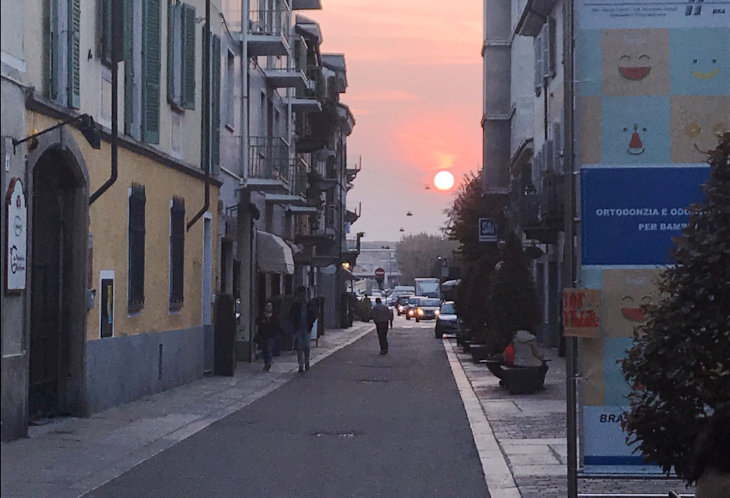 Michael would have none of this: “Absolutely not. When do the stores close? Let’s go, now.”

The question, inspired by his experience living in Valencia, reminded me that in my sleepy town shops closed at 6. It was 3:20. Without a second thought, we threw ourselves out into the streets. I did not question him, I wouldn’t have suggested it myself but a DIY last-minute Passover seder is still better than none at all.

What we needed, as a minimum, was the ingredients for the seder plate: shank bone, egg, bitter herbs, charoset, and a vegetable. Michael also really wanted kugel. I had none of these things. In light of our imminent travel, I had unceremoniously emptied my fridge of its contents, leaving only some bottled campari sodas and three jars of mustard. For a shank bone, we consulted the local butcher, because the place for chicken was miles away, and in Italy, you can’t really buy chicken at the butcher. He offered a pork bone (obviously inappropriate) in lieu of lamb, so we settled on veal. Where we were in Italy is famous for its veal, so we figured it would suffice. The butcher, Pino, wanted to give us a sack full of bones, presuming our goal was to make soup. We politely declined, only accepting a single bone wrapped in newspaper. 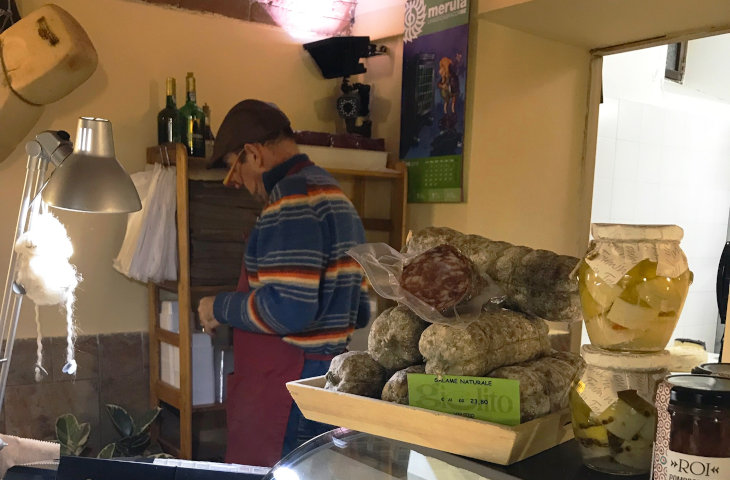 Next, we made our way to the other side of the train tracks to the cheap vegetable store. There, we struggled to find the vegetable we typically preferred to use in a seder plate: parsley. Produce buying in small-town Northern Italy was deeply reliant on seasonality, and it was still too cold for there to be much parsley around. The only place we could definitely buy off-season parsley was several miles away, a walk that would take hours, through dark country roads. We suggested alternate options, shouting vegetable names across the store. We busied ourselves with collecting other necessary items before deciding on an alternative. Once we had gathered everything except the ‘vegetable’, we did one last sweep of the shop. Alejandra moved a stalk of celery over to reach for an onion and unearthed the very last bunch of parsley, a measly handful of mostly-wilted leaves that would nonetheless serve our purposes just fine. We breathed a sigh of relief before racing back across the tracks to the salumeria for eggs. 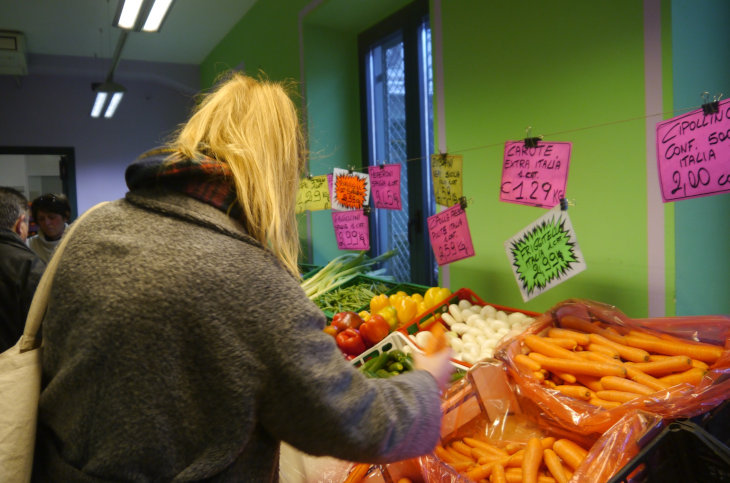 I knew that the salumeria could also get us horseradish, so in spite of how treyf it felt to acquire Passover ingredients in a shop decorated by hanging salami and prosciutto, we made peace with our situation and pushed the doors open, the bell jingling as we did. I met Martina at the counter and asked for four eggs and several grams of grated horseradish. She had always been a bit of a nosy, suspicious character, and furrowed her brows at our request. She knew I was American, so she asked whether we were making some specific American dish using eggs and horseradish. I started a sentence to reply and correct her, getting pretty far into it before realizing I had no idea what the word for Passover was in Italian. I made some poor attempts to explain it while she prepared our eggs and horseradish, grating the latter as she listened. We came to an understanding when I said something like, “Okay, you know the dinner from Da Vinci’s ‘Last Supper’? We’re doing that.” And she nodded silently, accepting my answer. With all our ingredients acquired, barely ten minutes before the whole town closed its doors, we clambered back up to my apartment to start cooking.

“Okay, you know the dinner from Da Vinci’s ‘Last Supper’? We’re doing that.”

Splitting the work was easy— our instincts were smart, and while Alejandra and I went to chop things for our mise-en-place, Michael stood by my cabinets, analyzing which platters left by my aging landlord might work best as a seder plate. We found a whimsical fish-shaped plate featuring seven recesses that would be perfect for our seder. Michael got to preparing the plate itself while Alejandra began to prepare the charoset. My kitchen was tiny, and the space next to the stove was too crowded for three. We opened a bottle of wine and took breaks on my balcony, whose doors (when kept open) afforded us a few more square feet of working room and some indoor temperature control since the temperature would soar whenever the oven was on. Luckily for Michael and his kugel craving, I had bought egg noodles at the only shop in town that sold food from the rest of the world several weeks prior. Preparing the kugel was ultimately easy work.

While we waited for things to cook, we did some preemptive dishes, telling jokes and stories. Suddenly, we began to wonder what we might watch later on in the evening. My vote always goes to Prince of Egypt, because I like the shiny aspect of the animation, but my aesthetic preferences didn’t prevail: Michael suggested we watch the Rugrats Passover special, an episode of television I had completely forgotten about. Something about that nostalgia made me well up a little, so I enthusiastically agreed to his proposition.

I’ll be frank and say I cried over my kugel watching that episode of Rugrats. I don’t know exactly why, but I maybe missed home a bit too much, I perhaps hadn’t really celebrated any Jewish holiday, even in a small way, for years, and didn’t even have anyone at school with whom I could commiserate. That day, I had friends from home, food that felt like home, and a moment to reflect. It was a bit of a slapdash Passover, but not at all inadequate given our scramble for such specific holiday materials in a place where they wouldn’t likely be found. Either way, we did it and slept soundly. On the train to Rome, I quietly re-watched that Rugrats episode, as satisfied with Passover as I had been after my last real family seder.

Giulia Alvarez-Katz is a freelance food writer and artist based in New York City.

Passover In Zimbabwe, Here’s How We Celebrate

Bring Your Marshmallows — It’s Lag B’Omer
The Promise Of The Land
Which Chat Are You On?: Parshas Behar/Lag Ba’Omer
Do You Like Slow-Cooked Food? Thank the Jews
Comments
MOST POPULAR IN Food
Our privacy policy