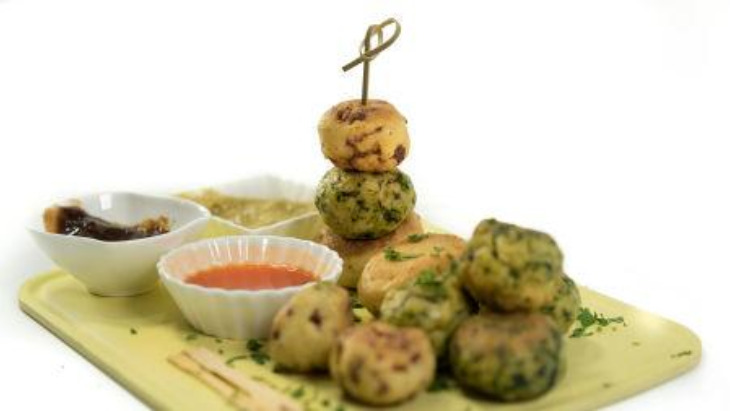 Matzah ball soup is a staple American Jewish food, popular at Passover seders, Shabbat tables, and Jewish Delis. Matzah balls were brought to the US by the Jewish immigrants from Poland, also called Knaidel, these soup dumplings are made from a mixture of matzah meal (ground sheets of matzah), eggs, water or seltzer, and some type of fat (oil or schmaltz). Usually served in chicken soup, these dumplings are pure nostalgia for many Jews and they make the best comfort food any time.

According to the late Gil Marks, culinary food historian, and author of The Encyclopedia of Jewish Food, matzah balls were a Jewish adaption of European soup dumplings.

“...By the 12th century, the concept of dumplings, originally made from bread, had spread from Italy to Bohemia, where it was called knodel (knot). From there, the name traveled with variations in pronunciation, to southern Germany, Austria, and France. The term also traveled eastward to the Slavic regions. The most widespread Ashkenazic name for dumpling became knaidel/kneydl, which is better know by the plural knaidlach/kneydlakh…As the medieval period waned, flour began to replace bread as the base…During the 8 days of Passover, Germans discovered that they could substitute matzah for the bread or flour, creating the most widely known type..matzah knaidel”

From that point on matzah ball soup has become one of the most iconic Jewish foods. Truthfully, every culture and every cuisine has its own soup dumpling from wontons to pelmeni. Even within the Jewish community, those from Iraq make Kubbeh, but those from Eastern Europe only feel comforted by a big bowl of Matzah Ball Soup. Served at every Jewish deli, most Jewish holiday tables, and even weekly for many on Shabbat.

They are so popular they even have caused their own rivalry based on whether a person prefers Floaters or Sinkers! Floaters are light and fluffy and sinkers are heavy and dense, you decide.

While, I would never say no to a nice fluffy matzah ball, perfectly soft on the outside, with just a little bite in the center, there is no reason we can’t have a little fun with them too!

So today, instead of simmering our matzah balls in soup, we’re going beyond seder night and making matzah ball snacks!

Recipe and Video by Daniel Digilov

These remind me of arancini, those Italian fried risotto balls stuffed with cheese and dipped in marinara. You will love that delicious cheesy interior and everyone will love this change up for a fun snack this Passover or any time.

Combine cheddar and cream cheese and stir in the jalapenos. Season with salt, black pepper and paprika.

Scoop out a tablespoon of the matzah ball mixture. Roll it into a golf-sized ball and press a hole in the middle. Stuff the ball with one tablespoon of the cheese mixture and roll it again carefully. The filling has to be completely covered with the dough. Refrigerate the matzo balls for 15 minutes.

Bring a large pot of oil to 350°F/180°C and fry the stuffed matzah balls for 3-4 minutes until they are golden brown.

Spinach, pastrami, and brisket stuffed matzo balls are an amazing trio. These can be served in soup or made even better when crisped and served up with matching dipping sauces.

What do you think of our fun new twist on matzah balls, will you start dipping?

I Connect to Judaism Through Food Because of My Mom

No Bake Cheesecake with Chocolate and Halva Recipe

Ashkenazi Style Cholent Recipe
The Promise Of The Land
Which Chat Are You On?: Parshas Behar/Lag Ba’Omer
Do You Like Slow-Cooked Food? Thank the Jews
Comments
MOST POPULAR IN Food
Our privacy policy