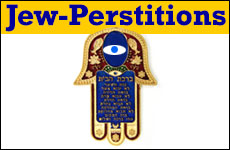 I’m counting. If I can fly from my computer gobble a mouthful of hummus, and be back within 62 steps, my cable company won’t over charge me –again.

I also have “good luck” clothes (my moth-eaten shmattes and bargains), and bad luck clothes (anything I bought retail), which may account for why I show up at the Emmys looking like Gary Busey and am still waiting to do another pilot.

Then there’s the counting of left-hand blinker noises till the light changes (613). According to my calculations, I’ve racked up enough lucky stuff to end the Middle East conflict. And should I lose? I quickly change, preferring to believe God wants me to do the opposite, like George Costanza switching from tuna to chicken salad and landing a job with the Yankees.

Before you spirit me to a mountaintop OCD clinic, let’s be honest – many of us have been raised with bubbe-meises and folklore used during stressful times in our lives

Despite being an avid Member of a Tribe whose sages have made sure we’re a sane, practical people, I admit it. I tend to go along with what was written in Sefer Hasidim, the 13th Century Book of the Pious: “One should not believe in superstitions, but it is best to be heedful of them.”

After all, since we’ve done the work, the networking, the hocking, do we need to risk evil eyes? Of course not. So We Jews sometimes feel the need to a) drive them away, b) buy them off, c) trick them. As a result we have a million of “Kine ahoras”, from salting new homes, to baby-naming, to avoiding numbers, to wearing a metal pin when visiting the Negev.

Here are three of my favorite (OK weird) Jewperstitions which, if they don’t help, could they hurt? Plus I’ve added a Jewpersition Round-Up … just in case.

1- The "Pooh, Pooh, Pooh" Spit: Not only was spit a handy dandy shmutz remover, my mother, whose major athletic endeavor was putting on my snow suit, could make the Jewish Guinness Book of World Records for spitting distance, hitting walls from Flushing, New York, to Tel Aviv. Spitting and pooh-ing three times was her prevention for any demon that would/could/might/may ever be evil-eyeing us. For years, I thought I lived in a hurricane zone. Even the great Maimonides was a proponent of the positive value of saliva. Trust me. If his mama had aimed, The Dead Sea would now be “The Wet Sea.” I’ve carried on this bubbe-meise and while my son hasn’t had to take a bath since 1990, he does, however, have an inexplicable fear of sudden bird droppings.

2- Pulling One's Ears When Sneezing: We may not all be athletes, but tugging ears while sneezing does require a certain coordination and timing to avoid shpritzing the neighbors without becoming Velvel Van Gogh. What’s the sneezy story? Until Jacob, some ancients believed that one "little head explosion” and Boom! Dead. To ward off this catastrophe We Jews started saying “zay gezunt.” And you thought your mama was meshugge? Today we have an allergist on retainer and not one Jewish child plotzed after sneezing!

How did ear pulling get all tied up with nasal passage protection? Who knows? But We Jews are still fighting over details, such as “one ear or two.” It's not just narishkeit. Not only have we created a whole range of Jewish sneezery diseases, for example, as “exercise intolerant,” I have it on personal authority that in 1764 a Lithuanian badchen (entertainer), Nachum Nukis, who, from years of tugging, had ears that not only wobbled to and fro, but he could tie them in a bow. And that man gave the world the legendary song: Do your ears hang low?

3- Chewing Thread: My bubbe used to make me chew thread! “Mamala, on you, I noticed a button was loose. Stand, I’ll sew.” For years I thought she was, God forbid, afraid she’d lose the spool – or swallow the needle. Who knew that “ALWAYS CHEW THREAD WHENEVER WEARING SOMETHING WHILE SOMEONE IS SEWING ON YOU” was yet another bubbe-meise? According to folk legend, this may come from either “Mir zollen nit farnayen der saychel" (no one should sew up the brains), or again with the dead, as shrouds are sewn around them. Chewing, then, proves to demons you’re still kicking. Personally, I’d rather prove it with chopped liver breath. And what normal human sews on a person anyway? You couldn’t fix the button before a) sewing it to my chest; b) then making me choke on thread to keep from hitting a vital artery?

*Eating garlic. Not only will rotten spirits run from you, not one person can have an intimate chat with Uncle Moishe, which considering that his conversation consists of details of the Myrtle Avenue El train, isn’t necessarily a bad thing.

*Licking a screaming baby's eyelids and spitting 3 times. The good news? No evil eye. Of course there’s always the possible of pink eye.

*The Hoopoe Love Potent: If a man hangs the tongue of the hoopoe (a “boid” found in Afro-Eurasia) at the right of his heart, he’ll win her hand, hands down. If a woman hangs its left eye on her neck, her husband will love her forever, even if she’s a mieskeit. So, if you want a chuppah, go find cut up a hoopoe.

*To open a lock, smear snake fat onto the right foot of a male raven than open. Who am I, Audubon? Much better to call a Gentile with a tool.

*Don’t whistle! Apparently, in addition to snatching Jewish happiness, demons like whistling, which of course is why gym teachers are constantly bleating at nice Jewish children who, like me, think softball has to do with matzo density.

*If you put a finger in your nose you’ll live in fear (Talmud, Pesachim 112a) – no doubt of not getting a second date.

So mamalas, should you have anything to add, please do. We all know We Jews need more bubbe-meises to make our world even more complicated! Oh, and safer.

And the Oscar Goes to?