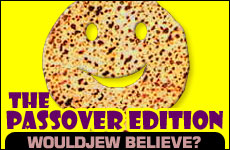 Comparing our Hebrew Calendar with the secular calendar for the uninitiated, can be a little like comparing long division and quantum physics. As comedian Freddie Roman has quipped, “You always hear people say ‘Is Pesach early this year or late?’ Jewish holidays are never ‘on time.’” In Judaism there are four new years (Mishnah in Rosh Hashanah 1:1.) The first new year is the 1st of Nisan, and the first month of the Hebrew calendar though years are counted from the 1st of Tishrei, the seventh month. The 1st of Nisan was considered the new year for counting the years of the reigns of kings in ancient Israel. It’s also the new year for the ordering the Jewish holidays. The month of Nisan is closely tied with Passover which always begins on the 15th day of Nisan and is seen as the anniversary of the founding of the Jewish people when they escaped from Egypt during the Passover story.

“You always hear people say ‘Is Pesach early this year or late?’ Jewish holidays are never on time.”

“Ever since I was a little kid, I remember Dad having an open house for Passover. Actors, fellow comics, singers, you name it, they were all there for the Seders. Dad did about 15 different versions. One thing vividly stands out in my mind. I went to open the door to let Elijah in – and standing there was Gregory Peck. He asked if he was too late for the services and I said, ‘No, go right in, Dad’s expecting you.’” – as told to the author by Sandy Hackett, son of the late Buddy Hackett.

The number four seems to dominate at the Passover Seder.

*There are four cups of wine, each one representing a verb recalling God’s miracles re: freeing the Jews from Egypt.

*The Haggadah speaks of four children, the wise, the wicked, the simple, and the one who does not know how to ask.

*The Haggadah also poses the legendary four questions asked by the youngest child at the Seder table.

Matzah, integral to Passover, commemorating the unleavened bread the Jews in their haste, ate as they fled Egypt, has some fascinating twists.

*The perforations retard fermentation and prevent dough from rising. In early times, artistic designs were often perforated, a practice later banned as the extra time increased the possibility of fermentation.

*By law, kneading to baking must be eighteen minutes maximum, to avoid fermentation.

*Originally matzah was round. The square matzoh-making machine was invented in England in 1875. But round hand made matzah has made a resurgence amongst some communities.

*Matzah on Passover must be made from one of five grains: wheat, barley, spelt, oats, or rye.

Whether in war, or in western territory, some observances became difficult to exercise in the wilderness for Jews. Yet they were enormously resourceful to remain kosher. Families would grow their own vegetables or raise cows and other livestock.  Still, holidays such as Passover still proved a problem. The few Jews supported each other and came together to celebrate.

Pesach during the Civil War [Excerpted]
“In 1861 I became attached to the 23rd Regiment destined for West Virginia. Twenty of my coreligionists were united in a request to keep the holy days. Our next business was to buy matzos. The morning of Erev Pesach, a train arrived HaG-Dahs. While a party built a log hut for services, others foraged cider, a lamb, chickens, eggs, and a weed [in lieu of bitter herbs]. For charoses we used a brick. In the wild woods, we offered G-D our prayers and sacrifice, since a number of my comrades have fallen. I have myself received wounds, but no occasion gives me more pleasure than Passover of 1862.”

Pesach on the Prairie [excerpted]
“Prairie Dogs Weren't Kosher" (Linda Mack Seldoff, 1977) describes the earnestness with which Jewish pioneers observed Passover through the recollection of a young Jewish boy in Arizona. [Excerpted]. “Before the holiday, his mother, my sister, and he would get the house ready, which included whitewashing the walls and scouring the floors. His mother made the utensils kosher for Passover with scalding hot water. The furniture was carried down to the [slough] and scrubbed and allowed to dry.”

In 1959, Seymour Siegel quoted from the journal of a young Jewish girl in Mesa.

“When we got ready for Passover, we even scrubbed the door knobs. We had a library with books in it. For Passover, my mother made me go through every one of those books, shake them out, God forbid someone would be reading a book a crumb would fall out.”

Pesach in the Old West [excerpted]
In his “Keeping Passover,” Ira Steingroot describes Pesach in Nogales, Arizona. “Mother seldom went to the temple as it was too far away (Nogales to Tucson in those days took about 2 to 2 ½ hours). All holidays were celebrated at home, where the baked goods were made. Families went to Sonora, Mexico to buy the fish for the gefilte fish for Passover. The Matzohs were bought in Tucson. Jewish families would come together and celebrate the sacred observance in one house.”

Just as these communities of old celebrated Passover so too we celebrate it again this year. A happy, healthy Pesach to all our wonderful readers!

A World Without Jews?

Funny Business
It Takes A Lot Of Faith To Be An Atheist
How Instagram Brought Back This Nostalgic Soup
What Makes Eli Run?
Comments
MOST POPULAR IN Jewlarious
Our privacy policy