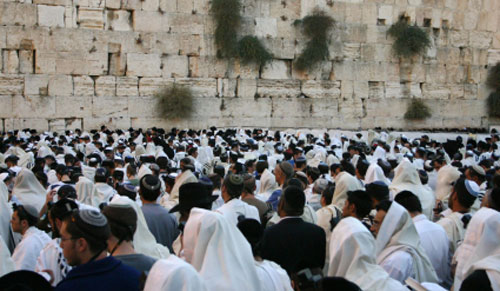 Yom Kippur, our time for atonement and repentance is the holiest day of the year for We Jews. For us, this is obvious; but for a few …

ALWAYS WITH THE QUESTIONS …

In every congregation, there’s always one whose purpose in life is to drive the rabbi meshugge forever plaguing him with “deep” and not so deep questions. Yossel was one such congregant.

“Tell me, Rabbi, why is it that four questions are asked on Passover, but not on Yom Kippur or Rosh Hashanah?”

“Oy, Yossel,” said the Rabbi grimacing. “Look, it’s very simple. To see a Jew wail and moan is not unusual, so who needs to ask questions? But to see a Jew happy – now that demands an explanation!”

This “Sabbath of Sabbaths” that starts with the hauntingly emotional Kol Nidre and ends with the blowing of the shofar, is a solemn time to mend our relationship with God, casting off our sins through fasting and prayer. Yet it is joyous as well because it commemorates God's forgiveness and is considered a time to start anew spiritually.

Let’s look at some Yom Kippur facts. Some you may know, some may be new to you, my dear readers, but all are fascinating!

Palestinians refer to Yom Kippur as the “festival of chickens” as they sold them to Jews for Kapparot.

What’s in a Name?

The Day of Atonement is known by different names.

The Jerusalem Talmud – Yoma (“the day”)

Some today refer to Yom Kippur as the “White Fast,” distinguishing it from the Black Fast applied to Tisha B’Av.

Palestinian Arabs refer to Yom Kippur as the “festival of chickens” as they sold them to Jews for the Kapparot ceremony.

Throughout my life, when I was moving further and further from Judaism, I always clung to a single thread – Yom Kippur. On that one day I fasted. I might be shooting it out with Burt Lancaster or John Wayne, or battling Laurence Olivier and his Romans . . . but I always fasted. – Kirk Douglas, born Issur Danielovitc in 1916. The son of Russian immigrants reaffirmed his commitment to Judaism with a second bar mitzvah on his eighty-third birthday.

On Yom Kippur, in Sephardic Mikve Israel Synagogue (”The Hope of Israel”) the story of Jonah is told in Papiamento, the local dialect – of Curacao in the Caribbean! More, the shul, established in 1651 is the oldest continuous congregation in the Western Hemisphere and a major tourist attraction for its sacred objects, beauty, history, and its sandy floor which may symbolize wandering the Sinai or the sand used by secret Jews, or conversos to quiet worshiping. Today, the Jewish population is in the low hundreds. Among those buried in Curacao’s Jewish cemetery are the sister of Joseph Touro, who established the Touro Synagogue in Newport, R.I., and the sisters of Baruch Spinoza.

Break Fast Around the World

The quintessential break fast worldwide is chicken soup and kreplach (meatfilled-dumplings), however, differences emerge around the globe.

These are the last lines of a poem written by Edgar Guest in honor of Hank Greenberg when the baseball great refused to play on Yom Kippur in 1934. The star of the league-leading Detroit Tigers endured brickbats when he decided to go to synagogue on Yom Kippur rather than up against the second-place New York Yankees at the climax of a key season. But he received a standing ovation when he entered his shul. Hank, born in New York on September 16, 1911, was the first Jew elected to the Baseball Hall of Fame in 1956.

Thirty years later, Sandy Koufax, baseball's premier pitcher, shocked experts and thrilled Jews by sitting out the first game of the World Series, which coincided with Yom Kippur. Koufax went on to win the series' most valuable player award. "In the Talmud, it is written that some attain eternal life with a single act," Koufax' biographer Jane Leavy would later write. "On Yom Kippur, 5726, a baseball immortal became a Jewish icon."

On Yom Kippur, 5726, a baseball immortal became a Jewish icon.

In September, 2001, barely two weeks after the World Trade Center attacks, the Los Angeles Dodgers' Shawn Green, at the height of his career, declined to play on Yom Kippur, donating his day's salary of some $70,000 to 9/11 survivors, and breaking a personal streak of having played 415 games in a row.

Not all Americans applauded Hank Greenberg’s convictions in 1934. This was an America of openly expressed Jew-hate on the field and off. This was a Detroit whose industrialist icon Henry Ford published newspaper opinion pieces that included such observations as, "If fans wish to know the trouble with American baseball, they have it in three words – too much Jew."

Then there were others …

During the Yom Kippur war in 1973, a gentile named William Ikon wrote a letter to the Colorado Springs Gazette Telegraph that was published in 250 dailies. He wrote:

“... bumper stickers read ‘Jews go home, pack your belongings and go. We do not want Jews. We want oil.’ But before you leave, do us a favor?! Could you leave behind the vaccine formula of Dr. Jonas Salk before you go?! Will you leave behind the capability in politics, your good literature and your tasty food. Please have pity on us. Remember it was from you that we learned the secret of how to develop great men as Einstein and Steinmetz. We owe you for the atomic bomb, research satellites and perhaps we owe you our very existence. I'm not sure I could live a secure life in a land in which you are not found. If at any time you will have to leave, love will leave with you. Democracy will leave with you – If you pass by my house, please slow down and honk ... because I'm going with you."

The Power of Laughter
Scientific Curiosity and the Divine Encounter
Mind Over Milkshakes
Love the Convert
Comments
MOST POPULAR IN Jewlarious
Our privacy policy
Aish.com Is Looking for Great Writers